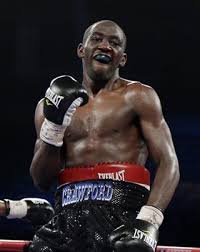 Prior to his victory over Prescott, Crawford was an untested prospect with a lot of upside. His impressive win over the crude Colombian brawler showcased his ability transition almost seamlessly from a slick defense to a diverse offense. Beating Breidis Prescott won’t answer all of the questions of the young Omaha, Nebraska native, but it was a suitable first test to pass before moving on to another level of competition. For Saturday night’s fight, Crawford is dropping back down to 135 pounds after a short stint at 140 pounds.

The more experienced Alejandro Sanabria comes in on a 10-fight winning streak dating back to a 2010 loss to Robinson Castellanos, who was 7-8 at the time. The 10 wins have come against a long line of journeymen and club fighters, with the lone bright spot being a unanimous decision win over Rocky Juarez in December 2011, for what it’s worth. In his last outing, Sanabria won a split decision over super featherweight contender Nery Saguilan.

Crawford fights primarily out of the conventional stance, but he can switch to southpaw at any time. He is fast enough to lead with the left hook or straight right and get out of the pocket before he’s countered.  He throws his right hand from all angles, and has shown some pop when he throws it over the top behind a range-finding jab. Defensively he’s got great reflexes, save for the occasional lapses when he’ll sit stationary and get caught while letting his hands go.

Sanabria is tall and rather long-armed and has the ability to fight well on the inside. He works from behind his jab often, but he can be countered with an overhand right (or Crawford’s right jab when he’s in the southpaw stance) when he allows his hand to drop on the way back in. Sanabria tends to loop his punches rather than shoot them straight down the middle. He isn’t very fast, but he shown he’s quick enough to double his hook and finish with an uppercut when he really lets his hands go.

Sanabria is a fighter who has shown he can press the action and fight while moving around the ring. Crawford is the type of fighter who will let the fight come to him and work with what’s in front of him. Due to his style he isn’t in a lot of exciting fights, but he’s good at what he does, which is to take away what his opponent does best. Look for Crawford to fight at whatever pace set by Sanabria as he quietly dominates the fight along the way to a unanimous decision victory and another step or two up the IBF lightweight rankings.