Hard-punching star in the making, Gennady Golovkin 26-(23kos)-0, faces his biggest challenge yet this Saturday, when he defends his WBA world middleweight title against the battle-hardened Matthew Macklin 29-(20 kos)-4. Golovkin takes on the tough, Anglo-Irishman Macklin, at the MGM Grand, at Foxwoods Resort, Connecticut, USA, in what promises to be a career defining fight for both men. For Golovkin, this looks to be the toughest fight so far of his professional career, which has taken him to the edge of elite stardom, while Macklin on the other hand, is aiming to make it third time lucky, in this, his third attempt at winning a world title. The stakes are high for each man, with defeat a career-derailing prospect. 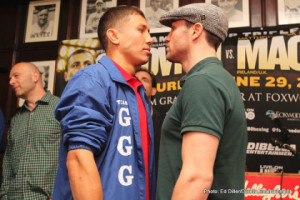 In an era where some ’elite’ boxers seem to be able to trash talk better than they can fight, this match-up has been a breath of fresh air, with both Golovkin and Macklin showing each other a lot of respect in the build-up to their clash, while at the same time promising fireworks when they get into the ring. These are two fighters who prefer to do their talking in the ring, and seldom disappoint when they do so.

After the trash talk fest of last week between Adrien Broner and Paulie Malignaggi, which showed so much of what is wrong with modern professional boxing, we have the antidote in Golovkin vs. Macklin; two fighters who are warriors inside the ring and not prima donnas outside of it.

The steady rise in popularity of Golovkin is an example of what many boxing fans want from their champions; action and excitement in the ring, but also, professionalism and respect outside of it. The Kazakhstan born Golovkin is an interesting contrast, polite and softly spoken outside of the ring, and a fearsome knockout artist inside it.

Golovkin has built up a growing reputation with a string of exciting defenses of his WBC middleweight title, disposing of challengers with a brutal efficiency, and fighting with an eye-pleasing blend of technique and raw power.

Boxing at the moment is in a state of flux with many of its elite champions reaching the latter part of their careers. Juan Manuel Marquez is 40 years old and has spoken of retiring soon, Manny Pacquiao’s future in the sport is uncertain following his loss to Marquez, many see Miguel Cotto as a spent force, and Floyd Mayweather, despite his recent victory and continued dominance of the sport, is obviously nearer the end. Sergio Martinez, the WBC middleweight title holder, is looking increasingly injury prone and vulnerable at 38 years of age. With all these elite fighters in the twilight of their careers, the sport is desperate to find some new stars. So far, Golovkin has shown that he may well have what it takes to fill in some of the void. With Adrien Broner looking less and less like boxing’s next big thing, Golovkin is in a prime position in his career right now to step up and make a statement against Macklin that will mark him out as an elite star in the making.

Golovkin and his management have made it clear, in the run up to the Macklin showdown, that they are ready for all challenges. They are open to taking on big name opponents, ranging from Light-middleweight to super-middleweight. It is an unusual fact that Golovkin is still able to make 154 pounds if he wishes too and this, aligned with his willingness to also move up to 168 pounds, opens the possibility of fights with the likes of Canelo and Mayweather at light-middle, and Ward and Froch at super-middleweight.

There are also a number of exciting possible encounters at 160 pounds for Gennady, especially if he is able to go ahead with his aim of attempting to unify the titles. Although the politics of unification would probably be more daunting than the actual physical opponents, he would need to beat in the ring.

The middleweight division at the moment is one of the most talented in boxing, but it also suffers from the curse of the multi ‘world’ titles. The other ’world champions’ at 160 are WBO title holder Peter Quillan, IBF champion Daniel Geale, and WBC champion Sergio Martinez, who is considered by most to be the true ’world champion,’ and one of the best boxers pound-for-pound in the world. However, Martinez’s stock has dropped a little of late, due to his increasing age, vulnerability in recent fights, and there are an increasing number of people who believe that Gennady Golovkin is now the best 160-pounder in the world. It is certain that a fight between Golovkin and Martinez would be one of the most highly anticipated 160 pound fights for decades.

The fact that Golovkin’s management has broached the prospect of him taking on opponents ranging from 154 to 168 pounds is a testament to their growing confidence in Gennady, and the feeling that now is the time for him to make his move onto the next level.

Perhaps one of the biggest dangers for Golovkin at this point, is if he or his team falls into the trap of looking too far ahead, because Matthew Macklin is not a fighter to overlook. The Anglo-Irishman has built up a reputation as a no-nonsense, aggressive box-fighter, who is unafraid of fighting the best opposition in their own backyards. Macklin’s first shot at a world title came in 2011, when he challenged Felix Sturm for the WBA middleweight title in Germany(at this point Sturm was the WBA’s ’super’ champion, while Golovkin was the ’Regular’ champion). Macklin gave a great performance of pressure fighting against Sturm, and was judged my most to be hard done by, when he lost via a split decision. In his second attempt at annexing a world’s championship, Macklin took on Sergio Martinez in March 2012, (for Martinez’s WBC Diamond belt, another WBC trinket) and gave the highly regarded Martinez a very tough fight, before being stopped after the 11th round.

The messy, often bizarre politics of the various 160 pound world titles aside, Saturday sees two truly world class fighters come together in a fight which is almost sure to entertain in all the right ways.

Despite his reputation as an aggressive come forward fighter, Macklin has shown in his fights against both Sturm and Martinez that he has underrated boxing skills, and is not simply a one dimensional slugger. One of the intriguing questions about Macklin’s clash with Golovkin is what approach each man will take against the other. Golovkin is also a better boxer technically than he is generally given credit for, and it is possible that we could see more boxing in this fight than is expected, certainly in the beginning, as both men respect each other’s strength and power, and may try to box for points early, while biding their time. However, it is unlikely that it will be long before a proper ’fight’ breaks out in this contest as both men seem to relish toe-to- toe confrontations.

Macklin’s main chance of victory lies in the hope that he can out work Golovkin and perhaps dent the Kazakhstan’s so far, fairly untested chin. This is certainly a fight in which we are likely to find out whether Gennady can take it as well as give it out. For all his talent, Golovkin is not the most elusive of targets, with his main defense being his offense. Indeed, Gennady may well have to tighten up his technique in this fight and not attempt to simply walk through Macklin like he has with so many of his past opponents.

If Golovkin really is as good as he has looked in recent fights, he will simply have too much strength and technique for his latest challenger. This is probably the fight in which we will see Gennady significantly stretched for the first time as a professional, and it should bring out the best in the Kazakhstan man.

These two fighters are about to make a whole lot of noise with their fists come Saturday night, with Gennady Golovkin taking another step towards becoming one of boxing’s elite champions, probably by a late rounds stoppage, after a fight that is liable to be dramatic, brutal, and beautiful all in one.