In his first bout since losing to Adrien Broner for the WBC world lightweight title, Gavin Rees 37-3 (18kos) found himself out-pointed by domestic rival Anthony Crolla 26-4 (9kos) -1 at the Bolton Arena, Bolton, Lancashire, England. Both men were disputing the vacant WBO Inter-Continental lightweight title, and a possible future shot at WBO world lightweight champion Ricky Burns. Rees started well, using his jab, and moving in and out with some good flurries, while Crolla kept a high guard, and landed some good counters. As the fight progressed, many of the rounds were close and open to interpretation, depending on whether you preferred Rees busier swarming, in and out attacks, or Crolla’s tighter boxing and more precise counters. Although 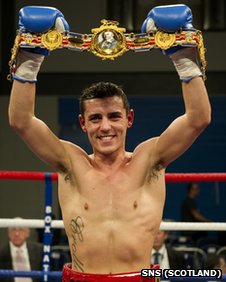 Rees often seemed to be outworking Crolla, the Bolton crowd (and indeed the Sky Tv commentary team) cheered his every counter and attack. As the fight went into the final rounds, Crolla was the more aggressive, as Rees seemed to think he had done enough to win already, and these rounds were crucial to the contests result.
The decision was a majority win for Crolla by scores of 115-115, 116-113, 115-113.

On the undercard, Paul Smith 33-3 (19 kos) stopped Tony Dodson 29-8 (14)-1 in the 6th round of an entertaining fight, to win the vacant British super middleweight title. Dodson had come out aggressively and tried to drag Smith into a brawl, but had been picked off by Smiths superior counters. Dodson was floored and cut in the 3rd round but survived, and courageously fought back in the next two rounds. The end came with a spent and bloodied Dodson reeling under some heavy shots from Smith.

Also on the undercard…

Super-bantamweight Scott Quigg 26-0 (19 kos)-1 looked impressive in demolishing aggressive Brazilian William Pado 21-4(14kos)-1 in three rounds. After measuring Pado in the 1st round Quigg dropped him at the end of the second and then finished matters with a right hand in the third. The performance showed that Quigg needs to be stepped up to the next level.

Promising Cruiserweight, Wadi Comacho 10-1(6kos), showed good hand speed and power in stopping Hungarian Atilla Palko 16-6 (13kos) in the 2nd round. Palko had been dropped for the third time when the referee halted the action.