Hello team and welcome to another edition of Boxing’s Sunday Brunch. This week we’re looking at a few things that Mexico’s favorite square-jawed super hero, Canelo Alvarez can and should do when he squares off against Floyd Mayweather  later this year. Also, how good is Gennady Golovkin? Does he have what it takes at this moment in history to take down Sergio Martinez? Will he get the chance? We are that awkward moment at Benihana when a romantic dinner for two becomes an elbow-to-elbow small talk fiesta for 20. With that being said, I gave you your instructions in the dressing room, what I say you must obey – Cuidate, escucha me, toca los manos y buena suerte…Let’s get it on! 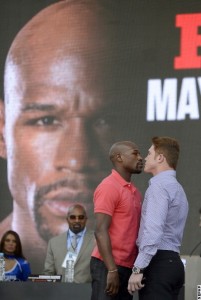 As much as I hate to admit it, I think that Triple G would knock Sergio Martinez out. There is a part of me that is sad to say that because I always loved Maravilla, but if you’re only as good as your last game, I’d bet dollars to pesos that Sergio does not make it out of the fight upright.

The left hook that Triple G landed on Matthew Macklin reminded of the same punch that (there’s only one) Ricky Hatton ended things with Jose Luis Castillo way back in 2007. It’s interesting that the last shot of the night didn’t look extraordinary relative to the other shots that GGG was firing at the Irishman.

That can only really mean that his power is special. To make it look like you’re not swinging for the proverbial fences but still score a devastating knockout is a likely sign of having a naturally dense frame.

I like the guy a lot, I think he seems affable enough, friendly in interviews but a killer in the ring. GGG has excellent poise and unbelievable patience. I’d wager that Triple G would stop Canelo if the two ever met.

8. Floyd Mayweather is counting on you charging at him, he’s dealt with guys who share that style his whole professional career. To be successful at charging in on Mayweather, you have to be patient enough to wait and possibly lose rounds, and strong enough to make it worth the wait – Make him pay for the rare mistakes he does make.

7. If Alvarez commits to throwing a high volume of uppercuts then he encounters a situation where he can either profit huge or get absolutely decapitated. I think a chance at victory against the pound for pound best in show is worth the risk for Canelo to go all out – Take risks.

6. A good strategy for fighting Floyd Mayweather is to attack the body. Many try the tactic but give up rather quickly when they begin to absorb the inevitable counters coming back.

5. Use your defense to put combos together and lay hands on that 36 year-old body. He supposedly hurt his ribs ahead of the Marquez fight some years back so that area should be a big target for you.

4. Being that there in fact is no game plan to beat the multi-division champ in the sport today, Canelo may have to fall into the old go-to strategy of applying pressure. Nearly every fighter who has gone up against Mayweather has attempted that tactic, the only one who had a modicum of success was Jose Luis Castillo – and the was a hundred years ago. We all know by now that Floyd was injured and literally dominated the immediate rematch. Alvarez’ only shot may be pressure, being the bigger man should be an asset to him. Key word being ‘should’.

3. Fight for the full three minutes of every round, as in, don’t take any breaks. Mayweather will capitalize on those lapses in action and will launch quick attacks which will steal close rounds in his favor.

2. Lean on Mayweather. As the bigger man it should be up to you to hit then hold, kind of like Floyd himself occasionally does. It tires fighters out,  if you’re able to smother him with your body weight for  the duration of the fight,  it just might tire him out in deep waters.

1. One of the most important things that Canelo can do to throw off the champ’s rhythm is to interrupt a routine. Occasionally when Mayweather lands a straight right, he automatically dips to his right and jumps to his opponent’s other side, Robert Guerrero had a touch of success in landing a punch to the head of Mayweather when he did that evasive routine, perhaps it was because he is a southpaw but it’s still something I’d think would be very important to consider if I were Saul Alvarez.

I hope you’ve had your fill of Brunch this Sunday. Much more to come next week like this quote from a DaytonaBeach dental implants always remember to brush and floss your teeth – Another Sunday Brunch is forthcoming.