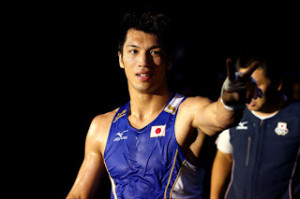 Murata, who signed with Top Rank in June, (as reported by The Boxing Tribune here) was Japans first boxing gold medal winner since 1964. In addition to an Olympic gold medal, he was also a silver medalist at the 2011 World Championships, and a gold medalist at the 21st President’s Cup in Jakarta, Indonesia that same year. His amateur record is said to stand at 119-19. After the Olympics he had declined the opportunity to participate in AIBA’s newly formed professional boxing league, which is set to launch in the fall. Instead, the 27 year old signed with Top Rank Inc. and is co-promoted by Teiken Boxing, which handles his promotion in Japan.

Akio Shibata is the current OPBF middleweight title-holder, and a former Japanese and OPBF light middleweight champion. He’s on a five bout winning steak and is 8-2 (2) in his last 10 outings. His last two defeats came at the hands of Charlie Ota, who stopped him in both bouts. Of his seven losses, he’s been stopped four times. While he holds a huge edge in professional experience, he’s not known as a heavy puncher and he hasn’t faced a very high level of opposition, which makes him a good choice for Murata’s first time out.

The bout is scheduled for six rounds, and Shibata’s title won’t be at stake.