Former world cruiserweight and WBA world heavyweight champion David Haye (26-2, 24 KO’s) has stated that he has signed a contract to fight undefeated Tyson Fury (21-0, 15 KO’s) on September 28th, now he’s waiting on Fury to do the same. 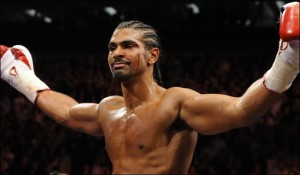 The fighter’s camps have been in talks for some time but have yet to reach a final and definitive agreement. In June Eddie Hearn, who co-promotes Haye, said the fight was very close to being a sure thing while Hennessey Sports, who promote Tyson Fury, hasn’t said anything.

Haye’s last bout was a fifth round stoppage of Dereck Chisora in 2012, his only fight since a lackluster performance against Wladimir Klitschko in 2011. He was scheduled to meet Manuel Charr this past June but a hand injury forced him to withdraw from the bout.

Fury, who holds the Irish and WBO Inter-continental heavyweight titles, last fought in Madison Square Garden, his U.S. debut, in April when he stopped former world cruiserweight champion Steve Cunningham in the seventh round.