London’s York Hall last night (Saturday 13th July) played host to a lively fight card promoted by Olivia Goodwin, with a main event that showcased the rise of perhaps a new star in the making at 135 pounds. 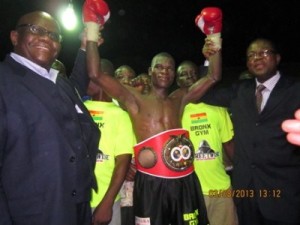 Richard ‘Azonto’ Commey’s 16-0 (16kos) colourful fans danced and sang as he entered the ring last night, and they were dancing and singing even louder, when he was leaving it some 30 minutes later. In between, Commey gave a display of box fighting which will certainly mark him out as someone to watch in the very near future. Despite going into this fight with an impressive record of having beaten all of his previous opponents via the knockout route, this match was a step up in class for the Ghanaian. Commey proved his worth by meeting the brave challenge of Paul Truscott 19-4 (3kos) and stopping him in clinical fashion after an exciting, whirlwind of a fight.

For his part, Truscott lived up to his reputation as being a dangerous and very live opponent for Commey, and at times it seemed as if he might have too much maturity and experience for the Ghanaian, in this Commonwealth title final eliminator.

After a decent warm up by the undercard fights, the hall really livened up, as the main event got underway, with both fighters having their share of support, but Commey’s was bigger and far louder. By the time Commey had entered the ring the sweltering hall was raining to the chants and shouts of his supporters.

Both men got off to a fast start in the first round, with Commey shooting out a sharp jab, and then stinging one twos from both hands, as Truscott rushed in to the attack himself, aiming for the Ghanaians lean body. The action was toe-to-toe as both men attempted to force the other man back, and the round ended with some after bell punches, as both kept up their attack, until the last possible moment.

In the second, the frenetic action picked up from where it had ended in the first, with both fighters throwing some sizzling shots, as Truscott sought to get on the inside and attack the body, while Commey fired his jab, and then swung both hands at the head. Truscott was showing the class, which gained him the Commonwealth featherweight title some years back, as he bobbed, weaved, and blocked many of the Ghanaian’s punches, as he continually came forward.

Although Commey was being pushed back, his counters were still carrying the more weight and accuracy, and he got through with enough to edge the round. The third and fourth rounds followed a similar pattern to the previous two stanzas, with Commey moving back and countering, while Truscott kept up his pursuit. Truscott tried his best to drive Commey onto the ropes, where he would unload with both hands to the body, but Commey fought his way off when cornered, despite Truscott’s defense, landed some good shots from his violent swings.

Commey became more circumspect in the 5th round, concentrating on just jabbing at the oncoming Truscott, who had his best round of the fight so far, as he landed the more telling shots to the retreating Commey’s body. At this point, it looked as if Truscott’s non-stop attack was slowing down the Ghanaian, but as if sensing that he was losing control of the contest, Commey came out with renewed vigour in the 6thround. Standing his ground, Commey upped his workrate again, and started to catch Truscott more with pinpoint counters. Half way through the round, a right to Truscott’s face drove him into the ropes, where he had to bob and weave in order to try to avoid a two-fisted rain of punches from Commey. Truscott admirably slipped most of the punches coming down on him, but was caught by enough, to have him holding on near the end of the round. As the 7th got underway, it became evident that the last round had taken its toll on Truscott, as his pursuit was now tempered by a slight hesitancy, and he seemed bothered by his nose, which he kept rubbing.

Commey was now finding Truscott with more ease and putting more venom into his shots. The plucky Truscott was still trying to come forward, and was hurt again, by a hard right hand, which again saw him driven onto the ropes under a hail of leather, as Commey tried his best to end matters. Once again, Truscott bravely rode the storm of the Ghanaian’s attack, with some excellent defensive work on the ropes, before grabbing hold to see out the round. At the end of the round, Truscott looked visibly drained, as he returned to his corner.

Commey was now in complete control of the fight and as the 8th round got underway began to pick off Truscott, who was still bravely coming forward, but now with an air of desperation. The end was in sight now, with every shot that Truscott took, and Commey showed his killer instinct by switching to the body and dropping Truscott with a sharp left hook. Although Truscott bravely regained his feet, he was still visibly in a lot of pain, and the referee waved it off, having seen enough. The end signalled the beginning of exuberant celebrations from Commey’s army of supporters, which culminated in Commey himself performing a little dance in mid-ring.

This fight proved that Commey is indeed an exciting talent, and a danger to the best lightweights in Europe and the Commonwealth. This was the first time that he had been taken as far as the 8th round and it’s not hard to see why, as he throws fast and sharp combinations, with good accuracy. Commey is not so much a one-punch knockout artist, but rather a high volume puncher, who either overwhelms or wears down his opponents with non-stop onslaughts. Whether he can make the jump into world class remains to be seen, but the fact that he can also box behind a good jab, bodes well for his continued rise. Commey is now the number one challenger for new Commonwealth Lightweight champion Derry Mathews, who won the vacant title last night, with a dramatic come from behind 10th round stoppage of Tommy Coyle.

If a Mathews vs. Commey fight comes off anytime soon, then it could well be the domestic fight of the year, with both fighters’ styles mixing to produce a clash, which is bound to produce fireworks. Commey would be a formidable test for Mathews, but by the same token, Mathews is a battle-hardened warrior, who has picked up the habit of grabbing victory from the jaws of defeat. One thing for certain is that it would be an unmissable clash.

There were six fights on the Commey vs. Truscott undercard.

In an 8 round light welterweight contest, promising Ricky Boylan 9-0(3kos), out-pointed Jan Holec 30(1ko), for the International Masters Bronze title. Cheered on by a large army of support, Boylan produced a good display of jabbing and moving. Boylan started fast, as if looking for the stoppage, but Holec was very tough and covered up well; to take a lot of Boylans shots on his arms and gloves. Boylan dropped down his workrate after the 3rd round and concentrated mainly on his jab, as Holec started to land some good shot of his own and pressure Boylan.
In the 5th and 6th rounds, Holec seemed to shake Boylan with some shots, but Boylan used his mobility to get out of trouble, and still scored well with the jab, to edge both rounds. After a 7th round, which saw his workrate dip, Holec demonstrated his superior strength on the inside. Boylan came out strongly in the final round, jabbing strongly and firing with both hands, to force Holec on the defensive, and win the round clearly; sealing his point’s victory.

At Cruiserweight, Heavy-handed Remel Scott-Pavelin made his professional debut against Tomas Kugler 14-32(8kos)-1 over 4 rounds. Pavelin dominated the defensive Kugler in the first 3 rounds with a jab and thumping body shots. In the fourth round, however Kugler suddenly came to life and threw some decent punches of his own, which drove Pavelin onto the ropes and seemed to shake Pavelin with a good right just before the bell. It was too little too late though for Kugler as Pavelin won the decision.

At heavyweight Tom ’The Bomb’ Dallas 17-3 (12kos) returned to the ring after his recent run of stoppage defeats, against Czech Tomas Mrazek 7-42(6kos). Dallas, looking to rebuild his career after his recent defeats to David Price, Matt Skelton and Tor Hamer, unloaded with both hands at times, but found Mrazek a stubborn opponent. Dallas used the jab well at times, then as the fight went on, was caught more often by Mrazek, and at times looked uncomfortable under fire. To his credit, Dallas came through some patches, when it looked as if he may have punched himself out, and won a wide point’s verdict after 6 lively rounds. Dallas is still far from the finished product, but this was a good start for him on his way back.

Light heavyweights Kevin Greenwood 3-2 and Vaclav Polak 1-2(1ko) fought out an entertaining 6 rounds that featured some good toe-to-toe exchanges. Greenwood took control with his higher work-rate and more telling shots but Polak returned fire with some good jabs and counters. Greenwood emerged a clear winner on points and now has his career firmly on track after losing his first two professional contests.

Light-heavyweight Miles Shinkwin 4-0 outboxed John Anthony 8-33(5kos)-1 over 6 rounds. Anthony was constantly coming forward trying to land big shots, but Shinkwin was too mobile and used his jab well. Miles tired somewhat in the last round and Anthony landed some good shots, but Miles held on and then closed out the round well as he got his boxing back together in the final minute.

At Cruiserweight Robin Dupre 2-0 won his second professional outing, as he pounded out a 4 rounds point’s victory, over Paul Morris 5-18(3kos)-2. Morris was a game opponent, but found himself out-gunned throughout by the heavy punching Dupre, who also displayed a good jab as well as frequent body attacks. Dupre won clearly on points, but Morris gave a good display of heart to survive the distance.