14 years ago, on his first jog through Shore Road, Brooklyn, Yuri Foreman was in awe of the city’s large landscapes. Across the Hudson, the Twin Towers seemed within reach, so he headed in that direction, but quickly realized the city wasn’t as close as it seemed.

Since that moment, when it comes to success in the ring, Foreman’s run laps around the city, and the entire country. In 2009, at the MGM Grand in Las Vegas Foreman captured the WBA 154-pound title from Daniel Santos, to become the first Jewish world champion in 71 years. The 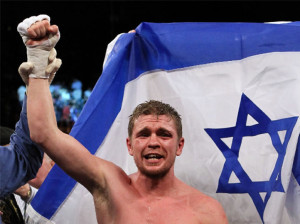 success was short lived. Foreman lost his next two fights, including a defeat at the hands of Miguel Cotto in the inaugural card at Yankee Stadium. After knee surgery and a second loss to Pawel Wolak, he took 22 months off, before returning in January.

Two fights into his comeback, Foreman finishes a grueling workout in preparation of his July 24 fight against Jamaal Davis. He looks like a man unfazed by the Heat wave that currently affects the city.

“The hot weather always adds to the stamina,” Foreman said while sitting on the edge of a ring in Gleason’s Gym. “Training was good, I had good sparring, it was a great camp and I’m ready.”

Back from a nearly two-year break, Foreman feels he’s 100 percent and ready to enter the ring for a third time this year, this time, without a knee brace. Following the Cotto bout, (where he wore a brace and then injured himself in the 7th round) the New York State Athletic commission has banned competitors from wearing a knee brace during a fight, a rule that many have dubbed “The Yuri Foreman Rule.”

“At the time I was hard-headed,” Foreman said. “But now looking at ACL research and how football players usually take a year off, it was definitely too soon.”

During his time away from the ring, Foreman rediscovered his love for the sport and his passion to compete returned.

“After the ACL injury, I was worn down from boxing,” Foreman said. “Coming to the gym, I was on auto pilot, my head wasn’t there. Following the two-year break, I began to not just run again, but to have a vision of what my return would be like.”

Trainer Pedro Saiz believes his pupil’s learned a lot from his two defeats. He said he expects Foreman to be back in the title hunt in the near future.

“I’d prefer him to take two more eight round fights,” Saiz said. “And two ten round fights, then he take another title fight. I believe he can be a world champion again.”

Foreman will try to redeem himself with a new team of advisors in his corner. He’s now promoted by Dibella entertainment, a company with more of a presence in New York. His new manager, Len Zimmerman of Lenco Sports Management, believes that Foreman will once again be champion. Zimmerman said Foreman’s story can be an inspiration to others who seek the American dream.

“We know he can do it, and his comeback journey will inspire and bring hope to so many people in our country and around the world,” Zimmerman said.

Some boxers stick around the game for a paycheck, but the 32-year-old Foreman’s comeback isn’t motivated by money. He likes the action, the adrenaline rush and enjoys being around his team, but most of all, he wants to make the Jewish community proud.

“I want to represent a good side of Jewish people,” Foreman said. “We’re not just a nation of doctors, accountants and philosophers, but we’re also a nation of sport.”

Now that he’s completed his rabbinical studies, Foreman will soon be ordained as a Rabbi. And although this position brings more responsibilities, he doesn’t expect much to change in his life, except his ring entrance.

“When I’m ordained, I see myself being introduced [to the ring] as Rabbi Yuri Foreman,” Foreman says with laughter.

He compares this transition to other Rabbis who have day jobs and believes that boxing is no different then a Rabbi whom provides for his family while working at a desk.

“My job is boxing, which is pretty much the same as accounting,” Foreman said. “Except they go to their office with a suitcase and I come to mine with a gym bag.”

“The Fighting Rabbi” is proud of his religion, and part of his motivation to be ordained is to help the younger generation of Jews find comfort with who they are.

“I love the Jewish faith,” Foreman said. “And I can affect a younger generation of Jewish kids that may not be as interested in their roots. Jews should be proud that they are Jewish, because they have a very rich tradition. The history of the Jewish people is like a boxing match; they’ve tasted the canvas many times, but get up every single time.”

When Foreman was seven-years-old and still living in the old Soviet Union, he loved the “Rocky” franchise. But it wasn’t until he watched the Mike Tyson-Razor Ruddock fight that he developed a taste for the Sweet Science. When his family relocated to Israel, Foreman continued to train, in mostly Arab gyms. At 18-years-old, after winning two national championships, he realized he couldn’t advance any further and moved to the U.S.

“I decided to make a move [to America] because in Israel boxing is not a popular sport,” Foreman said. “It’s only popular with immigrants and Arabs, a very small percentage of Israelis compete.”

When he arrived in Brooklyn, he shared an apartment in Bay Ridge with a friend and to help pay the rent, he worked in a garment factory, before meeting his wife Leyla and relocating to Downtown, Brooklyn. Today, they live there with their two children.

Fatherhood’s forced Foreman to make adjustments to his schedule, he is no longer wasteful of his free time. His behavior between the ropes has also changed.

“I’m more responsible, now that my actions in the ring affect my kids,” Foreman said. “I don’t want to set a bad example, it’s the butterfly effect. I’m trying to be more professional.”

Outside the sport, Foreman and his wife are working on a new diet book, which combines nutrition, exercise and spiritualism. He describes it as a self-help program that strengthens your immune system and reminds you to have self control. Since Foreman’s job consists of making weight and she’s a former kick boxer, they practice what they preach.

“It’s more of a self-help book, not a traditional diet book, where we say eat this or eat that,” Foreman said. “It’s going to be something new to the diet world, that hasn’t been used before, something to help you find your inner instincts.”

If he never fights again Foreman is a winner. His family left a crumbling Soviet Union for greener pastures, he was bullied into taking up a sport he would eventually excel at, he has his family, he has his faith and he has his peace.

“Many people have doubted me, they said that I’ll never be a world champion,” Foreman said. “But I don’t care, Judaism has helped me. Like Apollo Creed said, you have to maintain the eye of the tiger.”

Foreman (30-2, 8 KOs) is scheduled to fight this coming Wednesday, July 24 at the Roseland Ballroom in New York against Jamaal Davis (14-9-1, 6 KOs) in an eight-round junior middleweight bout.