This Friday Deontay Wilder will be looking to put his recent out-of-the-ring problems behind him, when he takes on former WBO World Heavyweight champion Siarhei Liakhovich at the Fantasy Springs Casino in Indio, California.

For so long, the dominating power in heavyweight boxing, America, has been crying out for a new heavyweight boxing star since the fistic demise of Tyson, Holyfield and Bowe, but with little success. Add to this the fact, that many non-American boxing fans acknowledge that boxing, as a sport, needs an outstanding American heavyweight in order to revitalize interest in the division and the sport itself. Respected as they are, the sad fact is, that the Klitschko brothers have presided over an era which has seen the heavyweight division fall into a state of obscurity with the general sporting public. The fault for this is not due so much to the Klitschko brothers, but rather a lack of talent within the division, especially in America, the depths of which has perhaps never been seen before within the sport. Could Deontay Wilder be the answer to the prayers of the American fight fans? It is still early days yet for Wilder, at a young twenty- seven years of age, and with little amateur experience, ‘The Bronze Bomber’ has been brought along slowly by his promoters ‘Golden Boy Promotions.’ So far, the biggest clue as to whether Wilder may be ‘the one’ is not so much that he has beaten everyone put in front of him, but the way he has dispatched them. 28 KOs in 28 fights, which indicates a heavyweight who can punch, is not a bad start for any fledging heavyweight contender. 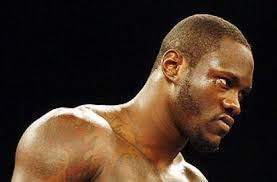 However, Wilder has also shown a darker side more recently, one that perhaps his promoters, Golden Boy, would rather we didn’t dwell on for too long. In May, Wilder was arrested in a Las Vegas hotel and charged with domestic battery, after a woman (who was not his wife) needed treatment for facial injuries, which included swollen eyes, a cut lip and bruising around her neck. After the resulting furore, including further lurid accusations about Wilder’s actions and behaviour on the night in question, the latest word from Wilder’s camp is that the whole episode was a misunderstanding, (with Wilder mistakenly believing at the time that he had been robbed by the woman) and that both parties have now apologised to each other and are seeking an amicle resolution to the situation. Who said it’s not what you know but whom you know?

Having placed his little transgression into the background as much as they can, ‘Golden Boy’ are hastily trying to get his career back on track in the ring, with Liakovich being billed as being the biggest test yet for Wilder.

At first glance, this match looks to be Wilder’s big step up. Liakhovich is after all a former ’World’ champion, having won the WBO championship from Lamon Brewster in April 2006, after probably, the best heavyweight championship fight since the Bowe vs. Holyfield trilogy. However, for the Belarussian, victory came at a price, for neither he nor Brewster (who has now retired,) have looked the same fighters, since they produced a slugfest which seemed to be a violent mixture of Ali vs. Frazier and Foreman vs. Lyle.

Of the five fights that Brewster took part in, after losing his title to ‘The White Wolf,’ he won only two, and retired after suffering a severe eye injury in a punishing defeat by Robert Helenius, an injury which he first suffered in his fight with Liakhovich. Meanwhile, Liakhovich himself has fought only six times in the seven years since his savage victory over Brewster, losing four, including three stoppage defeats. Seven months after winning the WBO title, the ’White Wolf’ lost his championship in his first defense, after being stopped in the final round by Shannon Briggs. It has been all downhill since then for the ’White Wolf’ with his only victories coming against limited opposition.

Liakhovich is regarded by many in boxing to be a ‘shot’ fighter and has looked sluggish and easy to hit in recent fights. Never the fastest of boxers to begin with, since losing his title Liakhovinch has slowed considerably, and become an easy target for a young heavyweight with a bit of ambition and power.

Ironically, Wilder has had only two fights less than Liakhovich, but a look at their respective rounds stats, shows that while Wilder has gone just 48 rounds so far in his 28 fights, the Belarussian has gone a much further 179 rounds, many of these rounds being tough hard rounds. This, along with a 10-year age gap, shows why Wilder’s youth and freshness will be such an advantage against the considerably older and ring-worn Liakhovich. The Wilder fight will be the ‘White Wolf’s’ first contest in seventeen months, after a one-sided defeat to Bryant Jennings. Unfortunately, he is at the stage of his career where the lay off is unlikely to have done him any good.

For so long the great power in heavyweight boxing, America, has been crying out for new heavyweight stars, but with little success. Could Deontay Wilder be the answer to many a boxing expert’s heavyweight dream? The truth is that we are unlikely to see Wilder pushed too considerably by the faded Liakhovich.

‘The White Wolf’, has been beaten badly in his last two contests by Byrant Jennings and Robert Helenius, in both these fights, he has looked out of sorts, with his timing and reflexes off, and his speed nonexistent. Liakhovich still has his innate toughness, along with his heart, but these attributes are only likely to ensure that he takes a more prolonged beating at the hands of Wilder, than anything else. Indeed, with his still decent chin and heart, but not much else, this could turn out to be an ugly fight to watch.

While there may be questions about Wilder’s overall ability as a boxer, there seems to be little doubt that he can punch. The main criticism against Wilder, is that the standard of his opposition has been at times truly awful, in building his record to 28-0 with 28 KOs, Wilder has faced some fighters who have looked as if they shouldn’t be allowed anywhere near a boxing ring, let alone the same ring as him. The fact that Wilder’s most recent victim, Audley Harrison, has been Wilder’s most prominent opponent to date, kind of sums up the fistic diet upon which he has been brought up on. With this in mind, Liakhovich is indeed the biggest ’name’ opponent that the ’Bronze Bomber’ has faced so far in his career. But, faded as he is now, and coming off another extended bout of inactivity, the ’White Wolf’ should be of no physical danger to Wilder. In fact, with his come-forward style, Liakhovich is made for a big puncher like Wilder, and will probably do well at this stage of his career to last past the 5th round, although an early exit will probably be the least physically damaging conclusion for Liakhovich personally.

This fight represents, just one of many steps, that Wilder needs to take if he wants to one day become the heavyweight division’s premier fighter. How far he will go in the end may depend as much upon his being able to avoid trouble outside the ring, as inside of it, and as past boxing history shows, with some people this is not so easily achieved.