Deontay Wilder (29-0, 29 KOs) scored the seventeenth 1st round knockout of his career last night, when he demolished Siarhei Liakhovich (25-6, 16 KOs) in a frightening fashion, at the Fantasy Springs Casino, Indio, California. It was yet another quick notch upon Wilder’s fistic resume and has inevitably provoked debate over whether Wilder will be the man to lead American heavyweight boxing back to the promised land. The ‘fight’ if you could really call it that, was brief, but brutal, and had the smell of an execution about it. 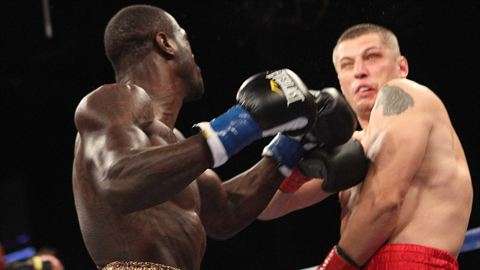 After some perfunctory feeling out punches from each, including a few good jabs by Wilder, a jab followed by a hard right, drove Liakhovich into the ropes, where two huge right hands landed to the side of the Belarusian’s head. It’s probably fortunate that the second right only landed glancingly, as Liakhovich was already on his way down to the canvas at this point, tumbling upon his back like a Friday drunk. Boxing is a sport of beauty and brutality, and sometimes it is most exhilarating when two polar opposites mix together, but at other times, the brutality will rise up it’s head with no redeeming companion. There was certainly nothing beautiful or exhilarating seeing the way Liakhovich shook and failed his legs and arms in the air for a couple of awful seconds as he lay on the canvas, as if he had been tazered. The ’White Wolfs’ disturbing motion was only calmed after referee Tom Taylor took hold of his head and cradled it until the arrival of the doctor.

Knockouts are a part of boxing and often one of it’s most exciting aspects, but this was an ’ugly’ knockout of a fighter, whom most suspected, was being led in for the slaughter. While Wilder’s promoters, Golden Boy Promotions, hailed this match as his biggest challenge, yet, against a former world champion, known for his strength and grit, those in-the-know, looked past the promotional guff, and realised that Liakhovich had not fought in seventeen months, and has been ’shot’ for far longer than that. True, no other fighter has ever dismissed Liakhovich in such a manner as this, and yet at the same time, the Belarusian’s punishing defeats in his past two contests, allied with his age and inactivity made him a prime candidate for such destruction, at the fists of a fighter like Wilder. So, in many ways, ’The White Wolf’ was an ideal opponent for ’The Bronze Bomber’ at this stage of his career, another early rounds knockout, and against a former champion, albeit a faded one.
Aside for the good padding, this win will add to Wilder’s resume, and the highlight reel appeal to some of its ending, this match had told us little about how good ’The Bronze Bomber’ is beyond his punching power. The history of boxing, especially the heavyweight division, is littered with the tales of fighters who were knocking out handpicked opponents with ease, until one day they finally came up against someone who could take it and fight back, and then suddenly things turned awry.
Wilder need only look at the recent experiences of England’s David Price, to see an example of a fighter who was at one point riding high on a string of impressive knockouts, only to see everything fall to pieces when he was finally tested himself.

Of course Wilder has had problems of his own recently, albeit outside of the ring, rather than inside it, and in many ways this match was an exercise in getting the Deontay Wilder story back on track, and recent bad news and misunderstandings into the past.
The questions remain the same; how will Wilder, the fighter, react when he comes up against a fighter who can take his punches and punch him back, or even how would he react if he was hit first? Then there are issues about stamina and mental toughness. It takes far more than the ability to knock men out to reach the top in boxing, to be a significant success, a fighter needs to have far more depth, and he is unable to either show or develop such a depth when dismissing overmatched opposition in one or two rounds.

Despite the dearth of talent in the heavyweight division over the past decade, there are some promising shoots of growth within the division now, and certainly far better and more equal matches out there for Wilder to consider in the coming months, if he is really to become a serious contender for the Heavyweight crown. ’The Bronze Bomber’ can punch, but we already knew that, the question is can he fight? Unfortunately, this was a question that faded warrior Liakhovich was unable to ask.