Friday Night Fights rolls into Chicago this week, when Polish light heavyweight contender Andrzej Fonfara (23-2, 13 KOs) takes on former WBA light heavyweight titlist Gabriel Campillo (22-5-1, 9 KOs) at U.S. Cellular Field. Heavyweight Artur Szpilka (15-0, 11 KOs) is scheduled to take on Mike Mollo (20-4-1, 12 KOs) in a rematch of their February bout, in which Szpilka twice rose from knockdowns to stop Mollo in six rounds. According to a press release received this week, Friday’s fights will be the first at a Chicago baseball stadium in more than 50 years. The broadcast begins at 9 PM ET/ 6 PM PT, barring any programming delays. 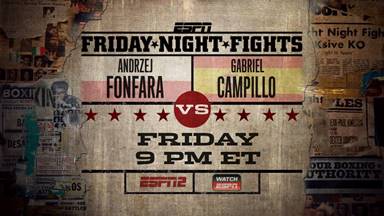 Fonfara is the current holder of the minor IBO light heavyweight title, but is on the path towards a major title shot. The Poland-born Chicago resident has been on a steady path since a near-shutout victory over former light heavyweight champion Glen Johnson last July. In his last outing, Fonfara stopped Tommy Karpency inside of seven rounds. With Fonfara’s last few wins coming against badly faded or overmatched, but notable opposition, a win over Campillo would be a big step in the right direction.

Campillo, now 34, has won only two of his last five, mostly against stiff competition. After a disputed loss to Beibut Shumenov in 2010, Campillo rebounded with back-to-back wins over soft touches in Spain. He came back in October of 2011 and fought to a draw with Karo Murat. Campillo showed signs of life last February, when he overcame two early knockdowns against Tavoris Cloud and fought to what many felt should have been a victory, but came up on the short end of the score cards. In January of this year Campillo was flattened by Sergey Kovalev, and came back to notch a win over club fighter Ionut Ilie in June.

Fonfara is tall and rangy, and he fights from behind his jab. He throws a nice left hook behind his left jab, and puts his punches together well. Against Karpency he found some success throwing his right hand straight down the middle, and that punch will need to be a factor against Campillo.

Campillo, like Fonfara, is tall and rangy, but he’s at a slight reach handicap against the Pole. In his last few fights he’s shown he’s susceptible to the straight right hand, as he will sometimes pull straight back when he’s attacked. Campillo doesn’t have any outstanding punches, but he throws just about any punch and from varied angles. Despite being only 29 fights into his career, Campillo has started to show signs of decline at 34 years of age.

Fonfara is on the way up, and at 34 years of age Campillo is on the way down. Fonfara’s handlers are banking on Campillo’s slow decline to continue as Fonfara outworks him for a decision victory.

The co-featured bout will pit two heavyweights in a rematch of their first back-and-forth fight that took place just over six months ago. Szpilka was dropped twice early in the fight, but came back to stop Mollo in the sixth round.

Szpilka has fought twice since then, beating Taras Bidenko in two rounds in April, and scoring a 1-round decision win over Brian Minto in June. And Mollo has been inactive since the two fought back in February.