Sergey Kovalev (22-0-1, 20 KOs) had arrived in Cardiff Wales with the quiet aura of a gunslinger who comes into town determined to prove himself a faster gun than the local hero.

There were those who doubted Kovalev’s reputation and pointed to the lack of many genuine world class names on his resume. Also, a lack of experience, due to miniscule amount of rounds he had built up over the course of twenty-two professional fights. 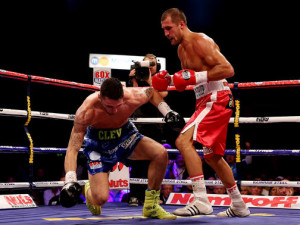 During the build up to his fight with Nathan Cleverly (26-1, 12 KOs), the Russian challenger said little in reply to the doubters, except to tell them to watch him at work in the ring before they make their minds up about him. Last night, after four rounds at the Motorpoint Arena Cardiff, Wales, about 6000 spectators, and millions of TV viewers’ world wide, were left in no doubt about Kovalev’s credentials, and how his alias of ‘Krusher’ is so well fitting.

During the short fight, Kovalev produced a performance against Cleverly, which was chilling in its skilful brutality. The Russian also showed that his powerful attacks are built upon the foundation of strong technique, including an excellent jab.
Kovalev showed that even at the highest level, opponents are going to have trouble lasting more than a handful of rounds with him, let alone defeating him.

With the roar of his home fans following him to the ring, Cleverly looked hyped up, as he climbed through the ropes and encouraged the crowd, by pumping his right fist in the air. This was a huge occasion for Cleverly, who described himself as having trained for this fight as if he were the challenger rather than Kovalev, and with hindsight, it might have been better for Cleverly to have entered the ring with a cooler head. The support of a home crowd can be an invaluable advantage, but it can also be an added pressure, especially on occasions when a clear head is needed most of all.

Kovalev was impassive during the ring announcements, the Russian seemed oblivious to the crowd, all of whom were behind the defending champion, except for his own entourage, and a smattering of about two dozen Russians, amongst the spectators.

The action began at a fast pace, and if we didn’t know already, Kovalev displayed clearly, from the start, that he is not a one-dimensional slugger, but has a good jab and a smooth relaxed style. Both men spent the first round trying to take control of the centre of the ring, and using their jabs. Cleverly, surprisingly, was electing to stand right in front of the Russian and attempted to force him back with his jab, while keeping a high guard against Kovalev’s own punches. The Russian largely stood his ground, however, and was the busier fighter, using his jabs to probe the Cleverly defense, and landing some early right hands to the body.

In the 2nd round, Cleverly continued to stay in front of Kovalev, rather than offer lateral movement or attempt to get on the inside, and force Kovalev back that way. The challenger stayed busy with his jab, while bringing in more of his patented right hands, with some good shots landing to the body. All Kovalev’s punches seem to carry weight, but in addition to this, they are also surprisingly swift and accurate.

Although Cleverly kept his guard high during the 2nd, there were already signs that he would need more than this too contain the man in front of him, and that the tactic to try and force Kovalev back so early was premature at best.

Cleverly did find some success in the 2nd with the jab, as midway through the round Kovalev was cut over his right eye, and for a brief moment the Russian seemed slightly disturbed by the sight of his own blood as he pawed at the eye with his right glove. However, this would prove to be a false dawn for Cleverly, as the challenger regained his composure, and continued his impressive work.

The 3rd round began with the same pattern as the first two, but with the Russian challenger now introducing more right hands into his work and inexorably increasing his already high work rate. When the end came, it was dramatic and brutal.
Kovalev’s, switching from head to body, was making chinks in Cleverly’s defense. He was hurt first by a left hand, and then driven momentarily into the ropes by a right-left combination, before finally being dropped by two right hands to the head.
Cleverly got up almost immediately, which was a mistake, but did not look overly hurt at this point, as he took what seemed like a rather long mandatory eight count from referee Terry O’Connor. Kovalev was fully unleashed now, as Cleverly tried to use the ring to escape his tormentor, he was clipped by a left, then more solidly, by a right, and went down again, slumping first to his knees, then onto his face.

Again, Cleverly showed his innate toughness, by regaining his feet almost immediately, but this time, he was out on his feet and on wobbly legs as the referee again gave him the standing eight count. As the action resumed, it became obvious that Cleverly had nothing left, as he struggled to stay on his feel, and tried to grab hold of Kovalev, as the Russian came in for the finish. Cleverly started to wilt, as soon as Kovalev landed with some more punches to the head and body, and at this point, referee O’Connor forced himself between the two fighters, grabbed hold of Cleverly, and waved his arms as if he was stopping the fight. With the action paused, and the fight seemingly over, the sound of the bell ended the round. At this point, the referee’s actions descended into farce, as he literally carried the dazed Cleverly to his corner, and deposited him onto his stool. He sat head bowed and seemingly oblivious to what was going on. By now, there was a general confusion over whether referee O’Connor had actually stopped the fight or not. Unfortunately, even the referee himself seemed to be confused. After some hurried seconds, it seemed to be decided that the fight was still on and that Cleverly would come out for the 4th round. Whether it was wise to allow Cleverly out for the 4th has to be balanced between the importance of the fight and the safety of the fighter’s health.

Although Cleverly had regained enough of his senses to respond to his corner, he was very much still in a fog, and this became apparent as soon as he literally staggered out for the 4th round. Kovalev unloaded both hands on Cleverly, as the Welshman blindly tried to elude him on rubber legs, and although bravely standing up under the barrage, Cleverly was driven defenseless into the ropes, and was about to go down to the canvas once again, before the referee mercifully stepped in and finally stopped the fight, as he should have done a round earlier.

Kovalev had shown just why he is called the ‘Krusher’ as he had promised in the build up to the fight. There can be few fighters with a more apt nickname.

In his post fight interview, the new champion dedicated his victory to his friends and fans, in a victory speech, which indicated he is a classy operator outside of the ring, as well as within it.

It might seem strange to compliment a fighter, who has won all but four, of his twenty-two victories in the first three rounds on his patience, but Kovalev has an impressive coolness about him in the ring. He is never rushed or messy, especially when he has an opponent hurt, and it is this composure, which makes him even more formidable.

There have already been comparisons drawn between Kovalev and WBA middleweight Champion and TV favourite, Gennady Golovkin. Both have similarly destructive fighting styles, but Kovalev if anything, seems to be the more destructive by far. In fact, he may well now be the most destructive puncher, pound for pound, in the world, and like his fellow eastern block sensation Golovkin, the ’Krusher’ looks set for big things in the future.

For Cleverly, it will be a long way back, but at twenty-six years old, he has the time to learn from this defeat and rebuild his career. While, almost inevitably, Cleverly is now being criticised as having been overprotected during his career, up until this point, its worth remembering that Kovalev himself had hardly mixed at world level himself, aside from his wins over-faded Gabriel Campillo, and the largely unproven Cornelius White.

Had Cleverly beaten Kovalev, its likely the Russian would have been branded as overprotected fighter with a padded record, who was never as good as his reputation, much like Lucian Bute is now regarded since his loss to Carl Froch.

However, after Saturday night, it is no exaggeration to say that not only is Sergey Kovalev as good as his reputation, he is if anything better.

Enzo Maccarinelli (37-6, 29kos)-6 won the Commonwealth Light-heavyweight championship from Orvill Mckenzie (21-12, 10kos), with a brutal left uppercut in the 11th round, which left Mckenzie out on his feet on the ropes, with his head bowed down. It was a dramatic end to what had been a grueling contest, which had ebbed and flowed, throughout, right up to the end. This was a rematch between the two men, after their first meeting for Mckenzie’s title in November last year ended on a controversial second round stoppage in favour of Mckenzie.

For Maccarinelli, the victory breathed new life into a career, which had come off the rails, after he lost his WBO world cruiserweight title to David Haye in 2008, by a second round stoppage. Further, inside the distance defeats, following the loss to Haye had provoked many in the boxing fraternity to advise Maccarinelli to retire. Enzo’s subsequent move down to the light heavyweight division seemed to have reached an ignominious end last November, after his controversial defeat by Mckenzie, but the rematch turned out to be Maccarinelli’s redemption.

With a title once more to his name, Maccarinelli may now look towards ending his career with one more big fight. In the past, there has been talk of a clash with fellow Welshman Nathan Cleverly, and while up until Saturday night, this would have looked to be a mismatch for Cleverly, it may now be a fight that would make sense, and stir interest, especially in Wales.

At super-featherweight, Stephen Smith (17-1, 10 KOs) produced a perfect left hook to knockout Cardiff favourite Gary Buckland (27-3, 9kos), and win the British super-featherweight championship. Stephen Smith is the brother of Paul Smith, who holds the British super-middleweight championship. Smith had spent the fight up until then, on the back foot, looking to counter rushes of the aggressive Buckland. For the first three rounds, the defending champion looked to be in control, as Smith showed good movement, but was mostly on the defensive. However, in the 4th round, a left hand counter from Smith seemed to momentarily shake Buckland, and Smith opened up for a bit, before going back onto the counter. In the 5th round, Buckland seemed recovered from the previous round, and was bustling forward, and pressuring the retreating Smith, when he was caught by a beautiful left hook, which saw him fall flat onto his face out cold, in a manner reminiscent of Manny Pacquiao’s defeat to Juan Manuel Marquez.