Hey team and welcome to a basil, garlic and oregano flavored “Top Five” edition of Boxing’s Sunday Brunch – The very best Top Five list you will ever read all day. We’ll be going from super bantamweight all the way up to light heavyweight, I’ll tell you what I’ve noticed this week and 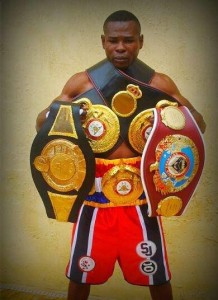 we’ll have a bonus gem of a recipe if you’re an Italian food lover. We are the reason why you always wax off after you wax on…With that being said, I gave you your instructions in the dressing room; what I say you must obey – Cuidate, escucha me, toca los manos y buena suerte…Let’s get it on!

Top 5 Must Have Fights:

Back in July of 2007, one of the best stoppages that year was when Nonito Donaire caught Vic Darchinyan square in the mouth with a hard left hand as he was coming in and Vic was unable to effectively come to his senses before the ref waved it off. I do think quite an opposite scenario will develop this time, however.

Vic Darchinyan has been on a two fight win streak while the Filipino was decisively out-classed in his last fight with Guillermo Rigondeaux. I think the confidence advantage will belong to the unorthodox southpaw. If I was forced to pick a winner in this great rematch I’d have to say that Darchinyan has more fire in his belly for a fight. Vic by TKO9.

Sergey Kovalev is an absolute beasto in the ring. He has deceptive footwork and scary power. The Russian has halted 20 of the 22 men he’s faced as a professional and perhaps it will take someone with true boxing intelligence to stop him. 48 year-old Bernard Hopkins has chopped down some relativity young opposition in his day, he has the IBF light heavyweight championship, which he lifted off of hard-punching Tavoris Cloud earlier this year and judging by his physique it seems as though Hopkins has a couple of timeless performances left in him.

You know that someone is going to get knocked unconscious or at the very least be immobilized due to pain when these two get in the ring. Both men have above average knockout power and percentages with Triple G leading on the score cards at a frightening 88.89% and Quillin with a very respectable 72.41%.

I am very interested to see how Golovkin will deal with the style of Kid Chocolate. I can see betting lines being closer than these guys’ have ever had in any of their fights, but my gut tells me that Golovkin’s deep amateur background will see him through to a late round stoppage of huge, chocolaty  proportions.

After a good, but ultimately losing effort with the WBC middleweight champion, Barker has won his last three fights since the defeat to Martinez in October of 2011 – It’s time for the rematch. Sergio Martinez is currently licking his wounds and is supposed to return to the ring in 2014 and a rematch with Dazzling Darren would be a great test for both men.

Barker has built up enough confidence that a rematch could be winnable for him now, especially considering how lackluster Martinez looked in his last fight against the UK’s Martin Murray. Anything is possible in boxing, however, and a Sergio Martinez return to form could very well be in the cards if these two met in their next bout; the 38 year-old Argentinian has the athleticism and physicality to put on a repeat performance and possibly out-do himself.

A matchup between these two would be quite intriguing. Rigondeaux would have the opportunity to unify another title and hold three of the belts in the division. Back in April of this year, the Cuban annexed the WBO super bantamweight title championship Donaire in exciting fashion. While some ringside observers and the judges had the scoring fairly tight, rest assured that it was an absolute white washing.

Kiko Martinez, who hails from a city in Spain not far from where my father grew up, is an exciting fighter who only knows how to go full steam ahead. It would seem that this would be a perfect foil for Rigondeaux’s calculated style, but a wonderful battle could ensue due to their very different approaches.  A win here for Rigondeaux would make him the WBA, WBO and IBF world champion.

Today we’re going to be sharing one of the best pasta dishes you’ll ever cook from home. Feel free to take liberty on the actual pasta and grab a couple of beers because it will be a minute.

The first thing you want to do is dice up your 2 onions to about quarter inch pieces (set aside in a bowl). These will more or less melt in the sauce and create a nice texture. Next, take two nice big tomatoes or 5 Roma tomatoes, core and cut it into small dice. With the flat side of your knife, smash 4 cloves of garlic and give it a rough chopping then add it to your bowl of onions and tomatoes.

Contrary to the old wives’ tale that putting your garlic too soon will cause it to burn and ruin your dish, if you use common sense and put enough olive oil to coat the bottom of the pan evenly and keep control of the temperature, your garlic will be just fine in time for the tomatoes to go in.

Take a nice heavy bottomed pan and heat some olive oil and a nob of butter at a medium-high temperature and once the butter has stopped foaming some you can add in the contents of the bowl all at once. Stir well and often with a wooden spoon (some metal utensils have a tendency to react with the acids in a tomato based sauce) to coat all the food. Season once everything has a slight shimmer from the fats. 1/2tbs sea salt, a few grinds of fresh black peppercorns and 1tsp of sugar will help the caramelization process along and obviously give depth of flavor to your final product.

Once the onions are translucent, or cooked even a touch further if you’re so inclined, add in 2 cans of diced tomatoes, 1 small can of tomato paste, 1 ½ tbs ketchup and mix in 1tsp granulated garlic, 1 ½ tsp Italian seasoning, 1tsp sugar, ½ tsp salt, and mix well and allow to simmer for 45 minutes, once the sauce is bubbling, cover to avoid a tomato kitchen catastrophe.

Pasta usually takes around 8 minutes to cook in boiling, salted water. Depending on which style you go with, I’d recommend capellini or ravioli, it’s important to time the cooking to coincide with the sauce finishing because you’re going to put a half cup of that pasta water in the tomato ragu to help it grab the pasta.

When the flavors have had a chance to meld and marry turn the heat all the way down and take the cover off with the steam side away so you don’t scald your face and hands off; stir well. At this time you want to introduce some fat to mellow out some of the acids in the sauce. Add 1 cup of heavy cream, ½ a stick of real butter and 1 cup of fresh parmesan cheese, mix it all well and taste to adjust seasoning (including cheese). Once the sauce tastes perfect add a handful of grape tomatoes, some freshly chopped parsley and fresh basil – it’s miles different of a final taste than if you used the dry stuff you have that’s probably more than six months old.

Add the aforementioned half cup of the salted pasta water and mix well to combine. At this time introduce the capellini (or whichever pasta you like) to the sauce and get it evenly coated (I use tongs for this). Serve with a few pieces, shaves or shreds of parmesan or pecorino and some toasted, sliced loaf bread that was rubbed with crushed garlic and melted (preferably clarified) butter.

Thanks for joining us again this week, next time on Boxing’s Sunday Brunch we’ll be catching up on all the latest gossip from in and around the sport with bonus quips and extra gibes. We well have expert cooking tips and tricks and possibly some high level boxing chatter. Don’t forget to floss for fuck’s sake. Sante.