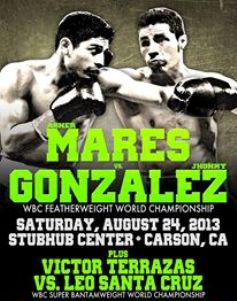 Abner Mares, now 27 years of age, is arguably a 3-time world titlist. His first title was obtained in the classical manner (excessive low blows aside) when he beat Joseph Agbeko to capture the Showtime Bantamweight Tournament title and IBF bantamweight title. Mares defended his title in a foul-free rematch with Agbeko before moving up to the 122-pound division. From there Mares battered Eric Morel for twelve rounds to win the vacant WBC featherweight title (that was lifted from Toshiaki Nishioka in the WBC’s boardroom). He defended his title against bantamweight stalwart Anselmo Moreno, in what can be called the signature win of his young career. In his last fight, Mares overwhelmed and stopped Daniel Ponce De Leon on the undercard of Floyd Mayweather’s May 5 near-shutout of Robert Guerrero.

Gonzales, now a very tested 31 years of age, is looking at possibly his last shot at the big time. His best days came in the 118 and 122-pound divisions, where he won a title at 118 and challenged for another at 122. Gonzalez’s first title winning effort came against Ratanachai Sor Vorapin back in 2005. He defended his title successfully against Fernando Montiel before moving up to challenge Israel Vazquez. After being stopped by Vazquez he came back to bantamweight the following year to defend his title against Irene Pacheco, but lost it to Gerry Penalosa in his next fight. It would be four more years before Gonzalez would travel to Japan to unseat long-time WBC featherweight champion Hozumi Hasegawa and win another world title. He made four successful defenses prior to losing his title in a blood-filled fight with Daniel Ponce De Leon last September.

Mares, despite his impressive win over Daniel Ponce De Leon, is still acclimating to the featherweight division. He’ll have to make some adjustments to his game to compensate for his height and reach disadvantages. Gonzalez is the more powerful puncher and is a natural featherweight with more experience, but his recent level of opposition falls well short of someone of Mares’ pedigree.

Mares is at his best – and some might say worst – when he’s on the inside. He works the body as well as anyone else in the sport, and it appears he’s worked out the technical kinks that came with landing some forty punches on or below Joseph Agbeko’s beltline in their first fight. Mares is no slouch when fighting at range, however. When many picked Anselmo Moreno to outclass him in their November 2012 fight, he matched wits with Moreno on the outside while he worked his way inside. One knock on Mares is his lack of serious punching power. His effectiveness is in his aggression and volume punching, which leaves him open to taking a lot of unnecessary shots. His chin has proven an effective attribute.

Jhonny Gonzalez will arguably the most dangerous puncher Mares has faced to date. Gonzalez has a very good right hand, and his height and reach make it a dangerous weapon at a distance. Like Mares, Gonzalez fights with an aggressive style and is comfortable on the inside, despite his effectiveness from range. Despite being only 31, Gonzalez is on the downside of his career as a result of so many tough fights, and he’ll need to refrain from engaging in a shootout with his younger and fresher opponent.

On paper, this fight looks to be a dangerous outing for Mares. But his learning curve has been impressive, his chin proven, and the timing of the selection of his opponent is just about right. Mares will go to the body early and often before going upstairs on a depleted Jhonny Gonzalez. His volume will overwhelm a bloodied Gonzalez and force a stoppage by the time the tenth round rolls around.

Terrazas is a fighter who likes to be on the inside where he can wear down his opponents. His defensive liabilities are compensated for by his penchant for covering up behind his guard at times, and he counters well when picking off his opponent’s shots before firing back.

Santa Cruz has proved to be something of a one trick pony so far in his young career. He has been compared to a younger, smaller Antonio Margarito, although his punches often have more behind them and he has more speed. He’s a dedicated body puncher who likes to go downstairs early and often. He throws his punches from all angles and lands at a high rate. Defensively he’s easy to hit if you’re willing to take a few to land one or two good ones.

Terrazas is up against someone who may very well break his will and wear him down over the course of the fight. He needs to fight smart and keep Santa Cruz out of his chest, where Santa Cruz will do the most damage. A steady jab and a lot of movement will keep Santa Cruz off balance and wasting a lot of energy trying to get inside. But Terrazas has a lot of miles on his 30-year-old body, and he’s up against a guy with a five-year age advantage who doesn’t take a step backwards. If Terrazas is unsuccessful in keeping Santa Cruz at a distance he’ll be in for a long night.

This fight will be close early on, with the two men slugging it out at close range. Santa Cruz will wear Terrazas down and take control of the fight sometime after round six, en route to a close, but comfortable decision win.