I spent a good part of my vacation this summer giving my six-year-old nephew Julian his first boxing lessons. Some bullying issues had popped up last school year and I figured it was time to give his confidence a push.

Mike Tyson left a bloody path of broken paper champs and busted contenders as he made a name for himself as, perhaps, the most lethal heavyweight of all-time. If Fear had a herald, it was Tyson. All anger. All pain. All destruction. He crushed bones and 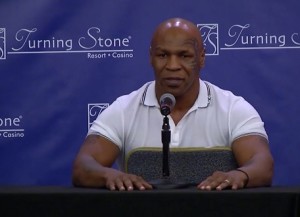 swallowed souls, forcing doubt and insecurity upon the shoulders of world class fighters. For a short stretch of time, Tyson was as dominant as any fighter who had ever entered the ring.

But, inside, “Iron” Mike never stopped being the scared kid left to fend for himself as his single mother, a prostitute junkie, battled her own demons out in the dark streets of their Brownsville neighborhood in Brooklyn.

Hungry and scared, the young Tyson did what many kids do when placed in similar situations. He lashed out at the world and learned to be strong enough to take what he wanted.

Trainer Cus D’Amato and boxing came along and saved Tyson from the dead end of petty street crime and gave him a purpose beyond mere survival. Tyson excelled at the physicality of the sport and, most importantly, excelled at the turf war psychology needed to succeed at its highest levels.

But he never really stopped being that scared kid.

Tyson blew through millions of dollars in his lifetime. And even if Don King had not helped empty a good portion of his bank account, he would’ve found a way to blow through that “lost” money as well.

When you know real poverty, you learn to spend whatever happens to come your way, as soon as you get it. Hold on to it too long, spend too much time delighting in your good fortune, and someone will come along to take it away. All good grace comes on borrowed time when you’re poor.

And Tyson surely fell into the stereotype of poor kid gone rich. He drank, drugged, bought a tiger, acquired a senseless parade of vehicles, and otherwise pissed away a fortune until all that was left were the aching addictions brought on by wretched excess.

And when he could no longer bring himself to fight for a living and the money had gone away, he was back to being who he was before talent and cash made him noteworthy. Still scared. Still hurt. Still infinitely weak on the inside.

Boxing is life. All fighters know this or will eventually learn this as their career progresses. Nobody becomes a real fighter just because they are fans of the sport and love challenges. Nobody does it for exercise. There are no scouts patrolling city parks looking for young boxing prospects.

A fighter makes the conscious effort to come to the sport, embrace it, and dedicate an ungodly amount of time in perfecting its science of violence. A fighter may be made in the gym, but he’s born from anger, hunger, misery and sometimes even self-loathing. The greats all have this in common– they fight because they have to. Forget the money, the fame, the title belts. They have to fight.

And a fighter doesn’t just stop being a fighter when he can no longer compete in the ring. The anger, frustration, despair all follow them. Some find a way to come to terms with their own bruised psyche. Some never manage to escape the darkness.

By all accounts, Mike Tyson is fighting the good fight now, trying to close the book on a past that hasn’t allowed him a day of peace in his life.

“I wanna live my sober life,” Tyson told the media following his debut as a promoter last Friday night. “I don’t wanna die. I’m on the verge of dying, because I’m a vicious alcoholic.

“I’m a bad guy sometimes. I did a lot of bad things, and I want to be forgiven…So in order for me to be forgiven, I hope they can forgive me. I wanna change my life, I wanna live a different life now,” he half-pleaded.

“I haven’t drank or took drugs in six days, and for me that’s a miracle…I’ve been lying to everybody else that think I was sober, but I’m not,” Tyson broke down, voice quivering. “This is my sixth day. I’m never gonna use again.”

My final night in Chicago, I asked Julian one last question before leaving to catch my plane. He was getting ready for bed, putting away our boxing stuff in the toy chest under his gigantic Batman poster.

“Remember what I told you about bullies?”

“Yeah,” Julian answered. “They’re small on the inside.”

Here’s hoping that Mike Tyson finds the discipline and inner strength to be big on the inside. This world can never have too many saved souls.

You can email Paul at paulmagno@theboxingtribune.com or watch as some of your favorite bloggers continue to blacklist him for making fun of their pretend advisory boards. Paul is a full member of the Burger King Kids’ Club, a born iconoclast, and an ordained minister in the Universal Life Church.