Hey team, welcome to a cilantro and lime scented version of boxing’s Midweek Meal Ticket, the boxing column that, when played backwards, has a higher than normal chance at summoning 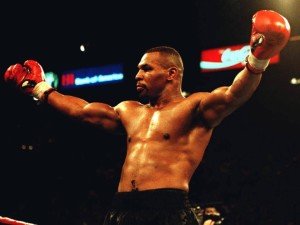 demons. Today we’ll be looking at some of the more memorable moments from this past week in the world of boxing. We will be taking a peek into the crystal ball and fast forwarding time all the way to September 14th.  We are the swift kick in the bollocks that is medically required in 37 states after watching the VMAs. With that being said, I gave you your instructions in the dressing room; what I say you must obey – Cuidate, escucha me, toca los manos y buena suerte…Let’s get it on!

Abner Mares lost his WBC featherweight title this past Saturday night to fellow Mexican, Jhonny Gonzalez. The 31 year-old Gonzalez was considered a live underdog and proved why by flattening the formerly undefeated champion in the first round of their 12 round contest – Mares went down early from an overhand right, then later still in the opening round, Abner was caught with a left hook that rendered him unable to beat referee Jack Reiss’ count.

Mares displayed great championship fiber by showing an enormous amount of class after the loss in post-fight interviews. “…I didn’t lose. I didn’t lose anything” a very composed Abner Mares would tell his interviewer “If anything I gained more, I gained experience I gained, as a person I’m going to grow and as the fighter I am.” Abner would continue “You know, it’s a learning experience, Jhonny was the better fighter today and that’s it. I just gotta to go back to the gym and keep on learning.”

By showing such mature poise and reflection as Mares had so soon after suffering his first defeat, it seems that a fighter with his level of enthusiasm and work ethics will be a champion again in no time.

Let us also not forget who Mares works for. You can bet that he was penciled in to win against Gonzalez, that knockout is a minor setback for the popular Mexican boxer. The whole card was set up so Abner could face Leo Santa Cruz after they both scored impressive victories, half the plan worked, but you can rest assured that Mares will likely be in nothing but title shots for a while.

I will now predict the weights for the Floyd Mayweather versus Saul Alvarez fight now. Alvarez: 152 (Second attempt) – Mayweather: 151 – When Saul Alvarez fought Austin Trout earlier this year, Canelo tipped the scales at 153.5 for their 154 pound clash.

I don’t see this catch weight being too strenuous for the young champion; I also don’t see Canelo ever fighting someone on the level of Mayweather…That said, we have seen Saul tire midway through fights, even so much as minimizing his activity to around one minute of each round.

This is not to say that he will be drained against Floyd Mayweather, what it is saying to me is this – how much improvement can a 23 year-old fighter do if he’s running his own camp? Mayweather by wide decision.

I’m confused by the notion that some people have where if Mayweather defeats Canelo in September then he goes down as the best fighter ever. Does that mean if Saul Alvarez manages to pull off the win then he is the best pound for pound fighter in the world? What about legitimate technicians like Guillermo Rigondeaux? What about Andre Ward?

Here’s what Don King had to say regarding the Floyd Mayweather Saul Alvarez mega-fight coming up in September: “That’s going to be a great fight, a great fight. You have the youth and you have the age and what they’re going to do is they’re going to demonstrate will the wisdom and age be able to take the brash youth and strength, you know what I mean, that will come in in September, the immovable object versus an irresistible force, something has to give and give it will in September…Canelo brings Mexico, Viva Mexico!” You would think he was promoting it!

Mike Tyson on why he hugged Teddy Atlas during Friday Night Fights season finale this past week – “Life is short man, I made amends with him…I owe it to my sobriety to make amends…I’m a vicious addict.”  Watching the hug and hand shake you could tell it was absolutely genuine. A humbling moment in the turbulent career of one of the most memorable fighters to step inside a ring.

I like Arash Usmanee, he’s aggressive, he sometimes is dirty, he has a good chin and loves to fight. I think his problem is that he doesn’t have the power to make his opponents respect him for more than a moment or two. I’m not sure he’ll ever get the types of breaks he’ll need to really succeed at the highest level of the lower divisions but he sure is fun to watch.

Does anyone else think that Mike Tyson should do either a sitcom or a reality show with Evander Holyfield? Someone needs to get on that. Call it “From Buster Till Now”.

Manny Pacquiao reportedly sprained his ankle playing basketball earlier this week. In other news, he had strawberry milk and four granola bars for breakfast that morning.

Thanks for joining us this week, we’ll be back with our regularly scheduled programming this coming Sunday. Don’t forget to extinguish all smokables in the jungle unless you want to give your position away. Change your socks often unless you want jungle rot and don’t forget to floss. A “lifestyle flashy” episode of Boxing’s Sunday Brunch is forthcoming. Sante.