There have been many tragic stories involving boxers in recent years, but few are as dark as that of Tommy Morrison, the former WBO World Heavyweight champion, who died on Sunday night, September 1st, in a Nebraska Hospital.

He was just forty four years of age. 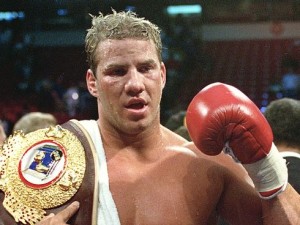 Tommy Morrison’s story is an almost stereotypical tale of of the handsome young boxer with a big punch who finds fame and fortune with his fists, and at one point has the world at his feet, but then has it all taken away from him in one savage sweep.

When Tommy Morrison co-starred in Rocky V with Sylvester Stallone in 1990 he was a 21 year old undefeated Heavyweight prospect with a record of 19-0 (17koes) who was mowing down his opposition in a manner that made some call him a ‘white Mike Tyson’. The fact that Morrison claimed to be a grand nephew of John Wayne (hence his nickname ‘The Duke’) didn’t hurt his marketability at all.

After taking part in Rocky V Morrison’s own life and career continued to become the stuff of movies, only unlike Rocky V in reality Tommy really would become heavyweight champion of the world, albeit after some ups and downs along the way.

On 8th Oct 1991 still unbeaten in 28 fights, Tommy challenged Ray Mercer for the WBO World Heavyweight Championship, and after bombarding the iron chinned Mercer for four rounds ran out of gas and was cornered and bludgeoned to unconsciousness in one of the most savage knockouts ever witnessed in modern times.

To his credit Morrison came right back from a defeat that many thought at the time to be career threatening, and despite the loss he was as popular as ever. After a run of eight victories, including exciting wars with Joe Hipp and Carl Williams, both of which displayed his flaws, but also his heart and power, and why he was so popular with the fans.

At the age of twenty four on 7th June 1993, Morrison took on the legendary George Foreman for the then- vacant WBO World heavyweight title.

In what was undoubtedly the best technical performance of his career, in front of a star-studded Las Vegas crowd, Morrison boxed to a plan, and out-jabbed and out-boxed the still formidable Foreman. It was a performance which revealed that Morrison wasn’t simply the one-dimensional slugger that he was regarded as and that there was perhaps at the age of twenty four, hope for much more.

The fighter with the film-star resume had one corner of the greatest title in sports, and seemed to have a golden future both in and out of the ring. But this is perhaps where things started to go terribly wrong for ’The Duke’. Still a very young man, Morrison began to live the kind of debauched life outside the ring normally reserved for Rock stars. His womanizing became legendary, as did his rumoured use of alcohol and other substances.

After an easy touch first defence of his title against Tim Tomashek, and just four months after his victory over Foreman, ’The Duke’ was dropped three times and stopped in the 1st round by Michael Bentt, losing both his title and a huge payday with Lennox Lewis in the process.

Morrison again came back, running up some rebuilding victories before beating Razor Ruddock in a thrilling shootout on 10th June 1995, that saw both men hurt and floored, before Morrison prevailed with a 6th round stoppage.

Four months later, the win over Ruddock gained ’The Duke’ a belated shot at Lennox Lewis, for the IBC World heavyweight title. But this time there was to be no fairytale victory for Morrison as he was floored four times and stopped in the 6th round by Lewis.

Although he was now viewed by some as being damaged goods, Morrison was still only twenty seven, with the looks and fighting style which would keep the crowds coming to see him, a new comeback was mapped out and a contract reportedly worth 38 million dollars, for three fights signed. Then on February 1996, while preparing for his first step of fistic rehabilitation, a fight against Arthur Weathers in Las Vegas, Morrison tested HIV positive. After a second test came back positive as well, Morrison called a press conference and announced his retirement from boxing and with courageous honesty blamed his reckless lifestyle and bad choices for his predicament.

Morrison had one fight in Tokyo in November 1996, saying before it that HIV could not be passed on in the ring. He stopped Marcus Rhode in two rounds and then retired again.

Facing the end of his career at the age of twenty seven must have been bad enough, but Morrison also had to contend with losing his whole life as he had known it outside the ring. In one moment he had gone from being an idol to a pariah. Years later Morrison would recall how friends and even family turned their backs on him, both metaphorically and literally. The prejudice and stigmatization must have been hard to bear for a man who had become used to being a star who had been feted and admired by everyone around him. Even his home town of Oklahoma took down the sign that they had erected on the outskirts, proclaiming Morrison as their famous son.

Perhaps with reality turning out so harsh, its not surprising that denial could be seen as a way out.

After a string of drink and drug related scrapes with the law Tommy Morrison announced a come back to boxing in 2007 and declared that he was HIV clear and had been a victim of a false positive test.

Armed with some dubious certificates that seemingly gave him the all clear, Morrison beat John Castle in two rounds on 22nd Feb 2007 in West Virginia, then a year later stopped Matt Weishaar in 3 rounds. But the comeback petered out when Morrison was asked to undergo more thorough tests to prove his HIV status.

Morrison was now talking about plots to get him out of boxing being behind his supposed positive tests and of a worldwide conspiracy regarding HIV.

Morrison continued to train until fairly recently and proclaim that he would be heavyweight champion once more if he was only given the opportunity to restart his career again.

In 2011 he married his wife Trish, who supported her husband in his claims that he was not suffering form HIV, even though his appearance began to visibly decline with each public appearance.

Morrison’s health took a turn for the worse about 18 months ago, when it is rumoured that he had pectoral implants removed after they became infected. After their removal, complications arose and according to his wife ‘The Duke’ contracted the Miller-Fisher variant of the Guillain-Barre Syndrome, a disease in which the immune system attacks the peripheral nervous system and can result in paralysis and respiratory failure.

Over the past few months the rumours of Tommy Morrison being close to death have grown, along with the variously dark theories over his symptoms and the causes of them. Ironically for someone who was so isolated after his positive diagnosis seventeen years ago, Tommy Morrison’s final days were talked about and analysed world wide.

Now he is gone there are those willing to judge him for the various mistakes he made throughout his life. But few would disagree that Tommy Morrison paid a very high price for a life lived recklessly.

Tommy Morrison was not a great fighter, but he was a big-hitting crowd pleaser whose fighting skills were probably never fully realized. His final career record was 48-3-1(42kos). Unfortunately, he will now be remembered for the tragedy rather than the triumphs of his life. Another story of wasted talent and too much too soon.

In one final irony, Morrison died on the 90th anniversary of the birth of Rocky Marciano.