In Bob Arum’s perfect world Michael Marley would be managing editor of the internet’s only boxing website and Floyd Mayweather would still be making eleven cents off every dollar earned.

But imperfect world aside, the aged boxing promoter and genius flimflam artist generally gets what he wants these days. And a big part of his recent run of good fortune has to do with his Svengali hold on, arguably, the world’s most popular fighter, Manny Pacquiao. 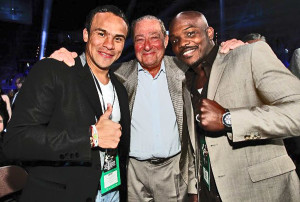 Without the Filipino icon, things may have been quite lean these last several years, especially in the face of a full-on Golden Boy assault.

But Manny allowed for a rush of quick cash and an influx of new, mostly-Asian fans who, while having a rabid loyalty to Pacquiao, were relatively naive to the big boxing picture.

In the five years of “Manny-mania,” Arum was able to do pretty much anything he wanted. With the aid of a compliant media, Arum turned Manny into an in house cash machine, keeping every cent earned in the Top Rank family and manipulating the narrative of the sport while the fawning media reported on Manny’s arrival at airports and every other bit of traffic-bumping minutiae.

It was a nice run, but all good things come to an end. And it certainly seems that even if Pacquiao decides to keep fighting after his November 23 bout with Brandon Rios, the list of possible opposition may not allow him more than two more fights, tops.

And this is the basis for Arum’s love-hate relationship with two fighters lured into Top Rank contracts with the promise of big money Pacquiao bouts– Juan Manuel Marquez and Timothy Bradley.

Whatever the case, Bradley got the nod, sparking slapstick-funny Arum outrage and a fake inquiry by the twisted old men of the Nevada State Athletic Commission, who after careful investigation, found they that were guilty of no wrongdoing.

Bradley, though, was tossed under the bus and then under the Vegas monorail by Arum and left to flap in the winds of outrage, dealing with death threats and an unfair status as poster boy for all that’s wrong with boxing.

The pressure forced the usually even-tempered Bradley to snap and publicly call Arum a liar for a statement the promoter made to the press, allegedly quoting Bradley as saying “I tried hard, but I couldn’t beat the guy” while waiting for the judges’ scorecards to be read.

Since that controversial split decision win in June of 2012, Bradley has had a tough time getting a big ticket follow-up bout, settling for a brain-rattling short money brawl with Ruslan Provodnikov in March of this year before signing on to defend his WBO welterweight belt against Marquez on October 12.

The catch, however, is that Marquez has absolutely ruled out a fifth bout with Pacquiao and only took the shot at Bradley to make history as the first Mexican fighter to win belts in five divisions.

The Mexico City native harbors some legitimate ill-will against Team Pacquiao and the three controversial decisions that opened their series.

“Pacquiao has been saying many things and immediately you can see that he wants me to take the bait, but he won’t achieve that,” Marquez recently said. “What he wants is a fifth fight, but it’s not going to happen. I wish to leave this sport with the memory of knocking Pacquiao out after they stole three decisions from me. And [in the fourth fight] I showed who was the better fighter.”

And, by all accounts, the 40-year-old Marquez means what he says.

All of this has to be extremely vexing for Bob Arum and his plans to wring new life from Pacquiao as an Asian casino attraction. Not even the mega-popular Pacquiao can entertain Asian high-rollers and vacationing Yakuza for long without real competition.

What was originally thought to be a money ploy from Marquez has turned out to be a matter of pride– at least for now. And with Pacquiao thus far refusing to exercise his rematch clause against Bradley (also, a matter of pride), there was nowhere for Arum to go. Match Bradley and Marquez now, hope for the best later.

And in this case, the best just may be if both high-end players get humbled a bit before entertaining the idea of another Pacquiao bout.

Oddly, Bradley-Marquez is set to be a pay-per-view event– something that seems to all but guarantee a monetary disappointment. Bradley, despite the Pacquiao fiasco and a Fight of the Year performance against Provodnikov, is still not a draw. Marquez, even after making the hearts of Mexican fights fans swoon with his one-punch KO last December, has never proven himself to be much of a draw sans Manny or Mayweather.

To make matters worse, the Bradley-Marquez PPV will come almost smack dab in the middle of a sizzling fall boxing season featuring four PPV cards in the span of ten weeks. Sandwiched between the Mayweather-Alvarez show on Sept 14 and the Pacquiao-Rios card on November 23 (plus a strongly-rumored Golden Boy PPV on November 9), Bradley-Marquez looks sure to be lost in the mix.

Stylistically, Bradley-Marquez also stands a good chance of being an epic disaster in the ring.

A mauling, unorthodox, but quick-fisted Bradley against an ultra-orthodox, counter-punching Marquez could make for a mess of a match-up with neither fighter, regardless of outcome, looking particularly good.

But maybe this is what Arum wants.

Pacquiao only needs the live body in front of him. He can sell his own show and the back story involved in fighting either Bradley or Marquez will be enough to make it an event.

A complete and total disaster takes away bargaining power from both Bradley and Marquez as well as their ability to move on to anything other than a Pacquiao fight. In Marquez’s case, specifically, a fifth Pacquiao bout would be the only real, main stage option for him, but he’d have to come with hat in hand after a poorly-received, poorly-sold failure of a PPV.

This isn’t to say that Arum wants to lose money and bury two of his best fighters, but it does seem to suggest that a little humbling via box office comeuppance may be in store for either or both fighters.

Maybe all of this is as simple as not having anything to do with either fighter and deciding to put together a time-killer of a bout. But Arum is a superb matchmaker, who has to know how ugly this bout could be and an even better businessman, who has to realize the very distinct possibility of this being a PPV flop.

Although this is all conjecture at this point, it certainly wouldn’t be the first time that reality was bent and twisted to accommodate Pacquiao: the karaoke-loving, God-fearing, big-smiling imp with the Midas touch.

You can email Paul at paulmagno@theboxingtribune.com or watch as beard-stroking bloggers everywhere rush to exclude him from their secret societies for being mean. Paul is a full member of the Burger King Kids’ Club, a born iconoclast, and an ordained minister in the Universal Life Church.