At this time last year, Seth “Mayhem” Mitchell (26-1-1, 19 KOs) was considered potentially the next big American heavyweight sensation. He was not without his flaws, however, and it was those flaws which derailed his march toward a title shot in his November 2012 fight with Johnathon Banks. Mitchell, who was heavily favored in the fight, was caught with a short right hand in the second round and tasted the canvas. Still badly hurt, Mitchell beat the count and was dropped twice more before referee Eddie Cotton stopped the fight 2 minutes and 27 seconds into the second round. 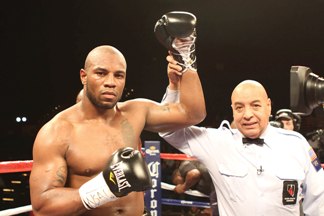 Mitchell granted an interview to The Boxing Tribune. He gave his thoughts on his performances before his loss to Banks, what he learned in losing, and about his upcoming fight with Chris Arreola this Saturday, September 7 on Showtime Championship Boxing.

When asked about the flaws he saw in himself, Mitchell was forthcoming and honest. “Before the loss to Banks, I was lunging and reaching,” Mitchell said. “I was out of position and I was overly-aggressive.

“After the loss, I realized I have to be more disciplined and that I have to listen to what my trainer, Andre Hunter, tells me to do. Andre told me the right things, but I became overly aggressive and didn’t follow his lead in the loss.”

Mitchell exercised his immediate rematch clause with Banks, and got back in the win column this past June. Mitchell told The Boxing Tribune that defense and head movement were two of the main focuses of his training camp leading up to the rematch with Banks, and while he was still hit and rocked several times in their second fight, Mitchell survived and came out with a close win.

But despite a more cautious approach in the rematch, some of Mitchell’s shortcomings were still apparent. When asked if he felt like other heavyweight contenders see him as a vulnerable opponent, Mitchell replied, “Yes, I’ve heard some of the comments. I don’t pay much attention to the negativity. I just go out and perform, and listen to what my trainer, Andre Hunter, tells me to do. I hope they all see vulnerability. Seeing a weakness and then trying to capitalize on it are easier said than done.”

After back-to-back rough outings, Mitchell is back in against a hard-hitting heavyweight threat. Chris “The Nightmare” Arreola (35-3, 30 KOs) is coming off a lopsided loss to Bermane Stiverne in April, and is bringing his 79 percent knockout ratio into Saturday’s main event at Fantasy Springs Casino in Indio, California. For both men, this fight is a chance to make a statement.

“This is a crossroads fight for both of us. Arreola is coming off the loss to Stiverne. I recently beat Banks, but still have to go out and perform well in this fight,” Mitchell said. “Winning this fight would bring me one step closer to fighting for the heavyweight title, and give me a win against another quality opponent.” A win for Mitchell, who only two fights ago was in a WBC semi-final title eliminator, would put him back in line, while a loss would put him in a tight spot where he’d be left behind a crowded middle of the pack.

In Arreola, Mitchell sees a dangerous opponent with a lot of experience to draw upon. “Arreola has a lot of power. He brings pressure the whole fight,” Mitchell stated. “He has been in there with [Tomasz] Adamek, Vitali Klitschko, and Stiverne, so he has experience. He had a lengthy amateur career. No question, he is a tough opponent. His back is against the wall, coming off a loss, and he needs a win too.”

Questions have surrounded Mitchell his entire career; how much is hype and how much is substance? Early flashes of brilliance were undone when he was sent sprawling three times against Johnathon Banks, and they were left largely unanswered in the wake of an uneventful rematch win. Seth Mitchell is a wounded animal, and can even be classified as desperate. His back is against the wall, and he’ll have to dig deep to get by Arreola on Saturday night. Win, lose, or draw, Seth “Mayhem” Mitchell will have to show what he’s made of.

“I just want to let all my fans know that I am mentally and physically prepared to deal with Chris Arreola on September 7. Tune in on showtime on Sat Sept 7 from Fantasy Springs in Indio, California. It will be an exciting night for the heavyweight division. Thank you to everyone that has been supporting me since day one. I will bring the Mayhem on fight night.”