Chris ’The Nightmare’ Arreola (35-3, 30 KOs) clashes with Seth ‘Mayhem’ Mitchell (26-1-1, 19 KOs) this Saturday at the Fantasy Springs Casino, Indio, California, in a crossroads fight that will most likely send each fighter’s respective careers in opposite directions. The winner of this contest will consolidate a world ranking in the top ten, while the loser will find himself, most likely, slipping out of the top ten and out of contendership for the immediate future. 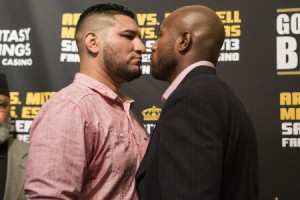 Although both boxers are around the same age, Mitchell is very much the new face on the block, while Arreola has seemingly been fighting at this level for the best part of almost a decade. Will Mitchell’s superior freshness aid him to victory, or will Arreola’s experience and heart give him a vital edge over Mitchell?

For Arreola, this fight is a perfect opportunity to put himself back in position for a second crack at the World Heavyweight championship. ‘The Nightmare’ was ranked number 1 by the WBC and on the verge of a possible rematch with WBC Champion Vitali Klitschko, who Arreola lost to in an ill-fated title challenge in 2009. In an upset, Arreola was beaten on points last April by Bermane Stiverne, and lost both his number one ranking, and his seven fight-winning streak. Arreola had shown plenty of heart against Stiverne, in a brutal and bloody fight, as he fought on, despite being floored and having his nose badly broken in the 3rd round. The Stiverne fight showed why Arreola is popular with boxing fans. He is a no-nonsense brawler, who makes up for what he may lack in the finer points of the game, with a big heart, and a decent chin. Unfortunately, Arreola’s happy-go-lucky attitude has also manifested itself in a less than stringent attitude to training, and against Stiverne, his conditioning was once more questionable.

In the run up to Saturdays fight, ’The Nightmare’ has been based in Arizona, in order to get away from the temptations of home, which in the past, have so often interfered with his training. Arreola knows that a defeat to Mitchell will push him down into the role of opponent, rather than contender, and has said that if he were to lose to the one time football player Mitchell, then he would seriously consider his future in the sport.

For Mitchell, a win over Arreola would be a step towards proving himself a genuine heavyweight contender, rather than an over-hyped curiosity, because of his football background. ’Mayhem’ Mitchell turned to boxing after a promising career in football was ended by knee injuries. After a short 9-1 (9kos) amateur career, Mitchell turned professional in 2008, and had been building up a growing fan base, when he took on Johnathon Banks last November, and was stopped in the 2nd round, after being floored three times. The defeat by Banks highlighted the technical deficiencies of Mitchell and called into question the durability of his chin. In the rematch in June, on the undercard of the Paul Malignaggi vs. Adrien Broner contest, Mitchell gained revenge of sorts over Banks, with a 12 rounds point’s victory. The fight itself was so bizarrely sleep inducing, that neither boxer emerged from it with much credit. Banks spent much of the fight posing and looking as if he was out for a walk, rather than fighting a boxing match, and seemed afraid of throwing punches. When he elected to throw some punches, Banks threw them sparingly indeed, and yet despite this, the few shots that he did land seemed to bother Mitchell on a number of occasions. However, Banks was unable or unwilling to follow up when he had Mitchell hurt, and the moments of opportunity were lost, as Mitchell jabbed his way to a bizarre victory. If anything, there are more doubts now about Mitchell’s world class credentials then there were after the first fight with Banks.

In facing Arreola, ’Mayhem’ will be meeting a fighter who, despite deficiencies of his own, is strong and relentless, and will be aiming to rough Mitchell up and expose his fragility. Mitchell will most likely go into this fight with the intention of trying to outbox Arreola with his jab, but ’The Nightmare’ will be a much more active and aggressive opponent than Johnathon Banks was recently, and if Arreola comes into this fight in top shape and highly motivated, then this match could easily descend into a ’nightmare’ experience for Mitchell.

It is hard to imagine Mitchell being able to brawl successfully with Arreola, and he does not seem to have the technical ability to hold Arreola off all night with the jab. So, ’Mayhem’ will need to come up with something that he hasn’t shown so far in his career, if he is to beat Arreola.

The main supporting fight on this bill is a featherweight fight featuring the comeback bout of former world Super-Bantamweight and Bantamweight champion Rafael Marquez (41-8, 37 KOs). The younger brother of Juan Manuel Marquez, Rafael has been an outstanding fighter and world champion in his own right, but has not worn as well as his older brother. Rafael will forever be linked in boxing aficionados minds with Israel Vazquez, with whom he had a epic four bout series, two of which (their second and third meetings) were voted ’the fight of the year’ in 2007 and 2008.

The savage series undoubtedly took its toll on both boxers and Marquez has not registered a meaningful victory since his 3rd round knock out defeat of Vazquez in their fourth and final bout in 2010. While Vazquez has gone into retirement, Rafael Marquez has won two fights against lower league opposition, but lost world title fights to Juan Manuel Lopez (for the WBO World featherweight title) and Toshiaki Nishioka (for the WBC Super-Bantamweight title). In his most recent contest, last October, Marquez was worn down and stopped in the 9th round by another ex-world champion Cristian Mijares.

Now thirty-eight years old, Marquez is facing Efrain Esquivias (16-2-1, 9 KOs) on Saturday night, in the start of a comeback, which he hopes, will lead to one more chance at world championship glory. Marquez has signed a four-fight deal with Golden Boy Promotions and this could result in him being put in with some of Golden Boys young guns, at either 122 or 126, something which may well give those who have followed his career a sinking feeling. It’s never a nice feeling to see a former outstanding champion used as fodder by the younger men who are replacing him.

Marquez should still have too much left for Esquivias, who is a tough journeyman and shouldn’t pose a real threat to the former world champion. This is one of those fights where an upset defeat for the favoured Marquez might actually be the most beneficial thing for him in the long run, as victory on Saturday is only likely to set him up for a more punishing defeat further down the line.