Ricky Burns retained the WBO lightweight title tonight, fighting to a controversial 12 round draw with Raymundo Beltran at the Scottish Exhibition Centre in Glasgow. 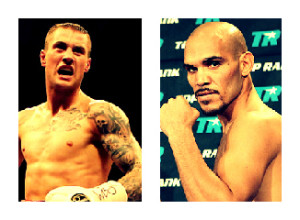 Burns started well in the opening round, but it was Beltran who took control as the fight moved on. The left hook was working well for the challenger, as he repeatedly backed Burns to the ropes and battered him to the body through the middle rounds. Though he did well in the sixth and seventh frames, Burns was dropped seconds into the eighth by a Beltran hook, and was holding on the remainder of the round. The final two rounds were close, as the challengers activity dropped a bit allowing the hometown fighter to edge out the rounds and narrowly escape with his title.

The end result had Beltran visibly upset, after the biggest performance in the biggest fight of his career, he didn’t hold back as he blamed politics for the scoring and called for a rematch with Burns in America. When Burns and promoter Eddie Hearn were asked about the possibility of a rematch, the question went unanswered while Burns blamed his performance on a dislocated jaw he suffered in the second round. Scores of the bout were 115-112 for Burns, 115-113 for Beltran, and 114-114. Jim Watt’s unofficial scorecard had the bout 115-113 for Raymundo Beltran.

This was far from the performance that the champion needed after difficulty in last defense had many questioning whether the best of Ricky Burns was in the past. For Beltran, who was making the most of what may have been his one and only title opportunity, the fight he put on should do nothing but raise his stock.