Promoter and former six-division world champ, Oscar De la Hoya, will not be attending the biggest 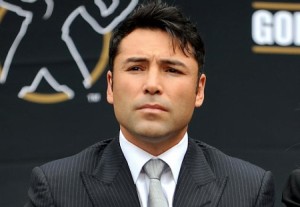 fight of his promotional career this Saturday night in Las Vegas. Instead, the founder of Golden Boy Promotions will be in an unspecified treatment facility, dealing with what can be assumed is a relapse of a well-publicized battle with substance abuse.

His statement, issued to the media earlier Tuesday afternoon, reads as follows:

Los Angeles (September 10) – Canelo Alvarez and I have big fights coming up this
weekend. His is the ring and mine in treatment.

I will not be at the fight this Saturday to cheer Canelo to victory since I have
voluntarily admitted myself into a treatment facility.

I explained this to Canelo and he understood that my health and longterm recovery
from my disease must come first.

Thank you for your understanding. I ask for your support and privacy during this
difficult time for me and my family.