WBC and WBA junior welterweight champion Danny “Swift” Garcia (26-0, 16 KOs) puts his titles on the line against Lucas “The Machine” Matthysse (34-2, 32 KOs) on Saturday night at the MGM Grand Arena in Las Vegas, Nevada. Originally intended to serve as the co-main event to the Showtime Pay-Per-View Main Event featuring Floyd Mayweather and Saul “Canelo” Alvarez, this fight between the two explosive power punchers could steal the show and be the talk of the night. 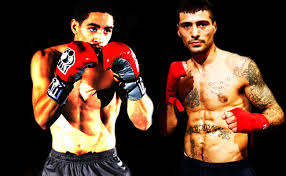 Garcia, despite being undefeated and the consensus champion at 140-pounds, comes in as the underdog. Garcia won titles in back-to-back fights in 2012, beginning with a unanimous decision win over a faded Erik Morales in March. Garcia then took Amir Khan’s WBA title by way of fourth round stoppage, in a fight where a bad cut forced Garcia to turn up the intensity in a fight where he was being badly out boxed. Garcia returned from his stoppage win over Khan to stop Erik Morales, who twice tested positive for a banned diuretic prior to their rematch last October. In his last outing, Garcia went twelve tough rounds with former welterweight and junior welterweight world champion, Zab Judah.

Lucas Matthysse, of Junin, Buenos Aires, Argentina, comes in as one of the hottest commodities in the sport. After a pair of tough losses to Zab Judah and Devon Alexander in 2010 and 2011, Matthysse has been on a tear. He walked through faded former champion Humberto Soto last June, before beating a rugged Ajose Olusegun from pillar to post over the course of a ten-round stoppage win three months later. And in January of this year, Matthysse needed only two minutes and twenty-six seconds to get rid of an overmatched Mike Dallas Jr. In his last fight, Matthysse dropped former IBF junior welterweight champion Lamont Peterson four times prior to a third round stoppage win, effectively setting up Saturday night’s showdown with Garcia.