Back in the old days of professional wrestling, promoters from the various territories would meet once a year to map out business strategies and decide on who would wear the world title.

Whoever they chose would have to be a bankable draw, a good worker, and a team player willing to “put over” stars in other territories and work honestly with the promoters. To be chosen as world champ was an honor– it meant that you could put asses in seats and that you were a trusted member of the secret wrestling society. 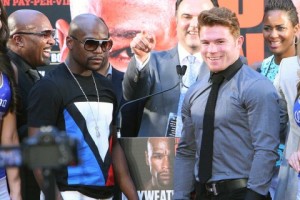 Boxing could never hope to be as organized as all of that, but it definitely shares some similarities with old school ‘rasslin.’

Saul “Canelo’ Alvarez was plucked out of his place in line as a young and upcoming prospect and was made the WBC’s no. 1 contender for the junior middleweight title. He would be all but assured of winning that belt when that same organization named light-hitting, career-long welterweight, Matthew Hatton as Alvarez’s opponent for the vacant title.

Alvarez got the nod because he was a young, charismatic fighter who was proving to be a major draw in Mexico. Someone, somewhere thought he had the juice to do the same in the U.S. and, voilà, a champion was made. Nothing could be more professional wrestling, except he actually did go out and fight Hatton in a real, albeit conveniently mismatched, bout.

Since then, “Canelo” has grown into his role and has, indeed, proven himself to be a draw in the U.S. He is set to face Floyd Mayweather this Saturday, September 14, in what many feel could be a transitional, passing of the torch bout.

There’s no doubt at the moment that Mayweather is boxing’s cash cow and the face of the business. But he’s not exactly the ideal torch bearer.

The five-division world champ is definitely big business, but not in the traditional boxing sense. Mayeather runs his own show, answers to no one, and most damning, keeps his own money close in check. For a superstar, he’s also not a particularly strong draw in terms of live gate and ability to bring in Vegas high rollers. For Showtime, he is big money, but he also generates big checks, making the profit margin less than what it is with some smaller fighters or what it could be with another, more cooperative draw.

In a perfect boxing world, the sport’s top draw would be an employee and not an employer. He’d be generally subservient and just happy to get what comes his way. In the ring, he’d be charismatic and flashy, like Floyd, but with a gift for crafting competitive conquests and/or highlight reel knockouts– unlike Floyd.

This Saturday, for the first time in Mayweather’s career as “the face” of boxing, he’s meeting someone in the ring who, at least superficially, meets all of the requirements to be the next big thing in the business. Will there be an effort afoot– intentionally or subconsciously– to force a passing of the torch?

“The problem with the Canelo fight is that finally Floyd is fighting somebody that they ain’t afraid to rob him with,” trainer Naazim Richardson told Percy Crawford of Fighthype back in July. “If Canelo fight the same fight that Cotto did or Oscar, Canelo gets a draw. They ain’t got no problem putting the business on this guy because they feel like they can move forward with this guy. The Cotto or the Oscar fight happens again and Canelo gets a draw easy. And then everybody gets money on both of ’em. They are still both undefeated and both can say they feel like they won.”

In boxing, where so much is subjective and unable to be challenged because of an appallingly convenient lack of transparency, anything can be done for pretty much any reason. And even if there is no organized effort to do something sinister with the year’s biggest fight, it’s not hard to imagine at least two of the four officials that matter (judges and referee) being swept up in the artificially generated winds of change.

If the bout is close enough after twelve, expect the unexpected– a draw, a Mayweather loss, an odd face-saving majority decision. One way or another, an effort may be made to pass either all or part of the torch to Canelo.

For Golden Boy, it was always in their best interest to keep Mayweather on top. “Money,” as a PPV-sharing ally, is worth more to them than a victorious Robert Guerrero or Victor Ortiz. But that’s not the case when it comes to Alvarez, a fighter they feel could be a legitimate crossover star. If Alvarez is no. 1, Golden Boy gets to run 100% of the show and not face a situation like they do now, where they handle most of the promotional logistics for about a fifth of the main event fight purse.

The 23-year-old battler from Guadalajara has the poise to handle the gig and, perhaps, the talent to pull it off. And as a growing Mexican and Mexican-American fan base, at least 100 million strong in the U.S., begins to flex its financial muscle, plenty of the sport’s true power brokers have to be paying attention. The Latino market is just one crossover icon away from exploding. Alvarez, more so than any other Mexican fighter in the sport, has the potential to be that icon.

The question is whether he’s, competitively, enough of a finished product to handle the grunt work of a new boxing empire– and that answer will come Saturday.

Whenever writing articles like this, there’s always the chance that people are going to perceive you as a conspiracy nut. The growing trend in boxing journalism seems to involve hard-headed denial of the sport’s shadier elements. Talk to any baseball cap-wearing 20-something boxing editor and he’ll tell you, with a straight face, that corruption in boxing is vastly overstated. Go to the mainstream, traffic-hungry corporate boxing scribes and they’ll say the same.

Speak about corruption too long and too hard and you’ll be buried in this business, forced to live under the weight of the typical “So and So is ready for war” banality that passes for boxing writing these days.

But dig below the surface, talk to the old-timers or those former insiders who have no active stake in the game, and you get a different perspective of the sport. Crazy things have happened and crazy things will continue to happen in a world where there is no centralized authority and no real sense of accountability.

Being such a huge fight with so much money at stake doesn’t exempt Mayweather-Alvarez from this craziness. As a matter of fact, the millions and millions floating around just draws the craziness closer.

In the realm of real sports, Floyd Mayweather should beat Saul Alvarez– and he could very well prove himself so superior that a forced passing of the torch won’t be possible. But don’t look away from the main stage because, if things are even remotely close, there will be high drama at the MGM Grand.

The biggest bout to be made in boxing isn’t Mayweather-Canelo, it’s Mayweather-Canelo II — and you’d be fooling yourself if you think somebody with big money and big power hasn’t already realized that.