When Floyd Mayweather Jr. 44-0(26kos) enters the ring at the MGM Grand in Las Vegas this Saturday, he will be facing the biggest challenge of his illustrious career so far, both physically and metaphorically. In Saul ‘Canelo’ Avarez (42-0-1, 30 KOs), the world’s number one boxer, pound-for-pound, will be squaring off against a man thirteen years his junior, who will also be out-weighing him by at least 15 pounds by fight night. 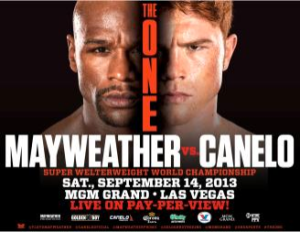 Mayweather, in his 17-year career has faced opponents of all types, and despite the accusations of cherry picking leveled at him by some, he has fought the best opponents available to him, at every weight division. Except, of course that one super-fight with a certain Mr. Pacquiao, which may or may not finally happen one day, before everyone gets too old. However, Mayweather has never faced an opponent with such a size advantage, who also has an age advantage as well.

While it may seem to be clutching at straws to talk about Mayweather aging, the fact is that ‘Money’ is now 36 years old, an age where bad things can happen to a fighter suddenly overnight. In the build up to this match there has been some talk about Mayweather having been floored in sparring for the first time ever. It may be just idle propaganda, or else there could be some truth in the rumour. Such incidents in training can be the first sign that a fighter is slipping.

This is just the sixth fight that Mayweather has had since he stopped Ricky Hatton in Dec 2007. Mayweather’s sparing activity has been caused by a mixture of out of the ring domestic problems (including a three-month jail stint last year) and Floyd’s need to allow his notoriously fragile hands time to rest between fights. There is a fine line between a boxer preserving himself by fighting infrequently, and a boxer deteriorating due to lack of action. Although Mayweather seems to have mastered walking this particular line, the longer his career continues, the harder it will be as he ages.

At first glance, Mayweather has not shown any discernible signs of decay in the five fights since the Hatton contest. However it is worth noting that Floyd has used the ropes a little more in his recent fights with Cotto and Guerrero, rather than using more of the ring as he did in earlier fights. This slight change in style can be an indication of a boxer ’saving’ his aging legs.

One of the reasons behind Floyd taking this fight with Alvaraez is the mixed reception that he got after beating Gurrerro in May this year. Despite dominating Gurrerro with a perfect display of counter-punching and defense, there were those in the audience that night who made it verbally clear that they expected more for their money. The fans want to see drama and action, they want to see Mayweather put under pressure by a fighter who has a chance of beating him.

Judged on pure skills and boxing ability, Mayweather vs. Alvarez is a no-brainer; Mayweather is in a wholly different league when it comes down to pure boxing skills. But there is more to this fight than simple boxing skills, there is the size and age differential between the two boxers, both of which could bear fruit for Alvarez.

Although there is only an one-inch height difference between Mayweather and Alvarez, with Mayweather standing five-feet eight and Alvarez at five-feet nine, but a look at the two men, head to head, discloses that both boxers have very different builds. Mayweather has a much more slender build, while Alvarez is very stocky, and heavily muscled for a light-middle, looking far more like a middleweight or even a super-middleweight, which, in reality…he is.

Alvarez’s size advantage cannot be over looked. Despite this fight, rather disappointingly, having a catch weight clause, (which means that Alvarez needs to come in at 152 rather than the usual accepted 154 weight limit), by fight night Alvarez will have rehydrated to as much as 168 pounds or more. Mayweather will find himself facing the biggest opponent of his career on Saturday.

Alvarez also has more going for him than just his size; he has some good skills, and is seasoned beyond his years, having turned professional at the tender age of 15, almost eight years ago. Although his skills are not comparable to Floyd’s, Canelo is a better technical boxer than many give him credit for being, just how good exactly, we will get to find out on Saturday. Much of what happens in this fight depends upon how well Alvarez is able to use his advantages of size and youth.

It is worth noting that Alvarez has been groomed for this moment almost from the very beginning of his career, when those around him first realised the potential gold mine that this redheaded Mexican could become with a little nurturing. Aside from his fistic ability, Alvarez is the first opponent that Mayweather has faced with a popularity which rivals his own, since his fight with Oscar De La Hoya.

Like Oscar De La Hoya before him, (who is of course now his promoter!) Alvarez has a crossover appeal, which spreads far beyond just the Mexican fans.

There are those in the boxing elite who may be desperate for Alvarez to become the new superstar of boxing. With Floyd’s career closer to its end, than it is to its beginning, a 23-year-old who can regularly pull in crowds of 40,000, no matter who he fights, is just what the doctor ordered for many of the power brokers in boxing. While Floyd is still undisputedly the number one boxer in the world, the search is already on for his successor, and there will be those who would like to see a passing of the torch on Saturday, from Floyd to Alvarez. The upper echelons of boxing can be a slippery business at the best of times, and sometimes certain people seem to get their way, despite all logic pointing to the contrary.

Is it just a coincidence, or perhaps a bad omen for Mayweather, that he is facing Alvarez almost 20 years to the day since Pernell Whitaker defended his WBC World Welterweight title against the already legendary Julio Cesar Chavez on 10th September 1993. Whitaker is a sadly overlooked boxer today, whose overall boxing technique and defensive skills rival those wielded today by Mayweather. On that night, against Mexican idol Chavez, ’Sweet Pea’ gave a master class of the sweet science, and seemed to have done more than enough to become the first man to defeat the still unbeaten Chavez. However, the three judges saw things differently, and instead of celebrating the crowning moment of his career, Whitaker found himself lucky to be heading home still with his title after the fight was ruled a draw.

Pernell was not so lucky some three years later when he defended the same WBC World Welterweight title against a twenty-four year old Oscar De la Hoya, and despite seemingly out boxing ‘The Golden Boy,’ in addition to flooring, and landing the more punches, ‘Sweet Pea’ was shorn of his title. Indeed, according to the judges on the night, the fight wasn’t even close.

Floyd Mayweather would do well to look at these two results and heed a warning that should come through to him from these past fights.

While Alvarez has not yet shown himself to be on a level comparable to either Julio Cesar Chavez, or Oscar de la Hoya, his advantage in size may well make up for the talent deficit. The truth is, that with the crowd, and probably the judges on his side on Saturday, Alvarez may well win rounds on aggression, even if his punches are being slipped or blocked by Mayweather. This is a fight where Mayweather needs to dominate in order to be sure of victory. He needs a performance similar to the ones he produced against Ricky Hatton and Victor Ortiz, rather than a performance akin to how he was against Miguel Cotto or even his last fight against Robert Guerrero.

The main danger for Floyd in this fight is if he relies on his countering and defensive skills and is not offensive enough, he could find himself losing rounds, which he shouldn’t be losing.

There will be those who will say that a controversial draw, or win for Alvarez would be a profitable result for everyone, as with few other star opponents on the horizon (aside from a certain Manny Pacquiao!) a rematch or even possible trilogy with Alvarez would be a huge money-spinner for all.

However, Floyd enjoys being number one far too much to ever be dragged into such thoughts. He will want to win and win well. We can only hope that if he does so that the judges will score fairly and appropriately.