“The One”, the most talked about boxing event of the year is Saturday night at the MGM Grand in Las Vegas. Three title fights, five champions with nine alphabet belts between them. In the main event you’ll see the pound for pound number one fighter in the world Floyd “Money” 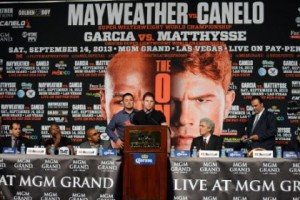 Mayweather by unanimous decision– “It is youth versus wisdom, Floyd is real technical and smart. It’s hard to catch him with the same shot twice. Canelo is hungry, young and he can punch, but he still has flaws so I see Floyd winning by decision.”

Matthysse by KO or TKO–  “There’s going to be fireworks in this one and it may steal the show. I think whoever lands first and hurts his opponent, it can be all over from there, but I have Matthysse in this one.”

Mayweather by unanimous decision– “You have to go with the guy who hasn’t been beaten in 17 years. I’m going to go with Floyd because he’s from Grand Rapids, Michigan where I’m from originally, so I have to go with the home team. As long as fights like this happen, no one can ever say that boxing is dead.”

Danny Garcia Wins– “Garcia is my man and I think people underrate him more than they should.  Matthysse has lost to Zab Judah and Danny beat Zab, so I got Danny.”

Garcia Wins– “That’s the fight everybody wants to see. I’m going with Garcia, that’s my homie. He showed a lot in his last fight against Zab so I think he has the skills to do it.”

Mayweather by unanimous decision- “I’m not betting against Mayweather, he’s super talented, he’s smart in the ring, and he knows how to adjust to every fighter. So I’m going with Mayweather on this one.”

Fifth round knockout for either fighter–  “I like Garcia and I want to say that I’m going for him, but Matthysse is tough. I’m undecided on who’s going to win but somebody’s going to get knocked out in the 5th round.”

Mayweather by unanimous decision–  “Canelo is the best guy that Mayweather has ever fought but you can’t go against Floyd. I thought the Canelo-Trout fight was a close fight and Floyd is on another level. Canelo will give him a run for his money but when it’s all said and done Floyd will come out on top.”

Matthysse by KO– “That’s just a toss up fight, it’s going to be a barn burner. What Matthysse has been doing lately is unbelievable but I wouldn’t discount Garcia, he always finds ways to win. Both guys will get knocked down but I’m going to lean towards Matthysse with a late KO.”