Ken Norton, who has died at the age of 70, was one of the outstanding figures at a time when Heavyweight boxing ruled the world of sports in the 1970s. It was a time that saw the heavyweight division at its most talented and exciting, and Norton was one of the best of this time, alongside the legendary Joe Frazier, George Foreman, Larry Holmes and, of course, Muhammad Ali. 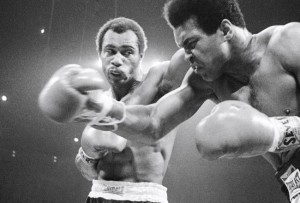 Indeed, there is a good argument for saying that Ken Norton gave Ali more trouble in their three fights, than anyone else, including Joe Frazier. While Ali’s fights with Frazier were wars of attrition, Norton, with his idiosyncratic crossed armed defence, (similar to that used by the legendary Archie Moore) posed Ali with a far more technical problems. Norton crablike style meant that he was able to nullify Ali’s most potent weapon, his jab, leaving Ali needing to be at his most versatile and resourceful in all three of their fights. A trilogy which immortalized Norton in Heavyweight history.

Born in Jacksonville Illinois, 9th July 1943, Ken Norton made a comparatively late start to boxing, picking up the gloves for the first time while he was in the Marines after being an outstanding athlete and football player while at high school. After being turned down for a place in the 1967 Pan American games, due to his unique style Norton turned professional that same year at the age of 24. Standing six foot three, Norton was an imposing heavyweight, with a speed and athleticism that belied his muscular size. In addition to his style which so many of his opponents found problematic, Norton also possessed a great jab of his own and underrated power.

From late 1967 to 1973 Norton suffered just one defeat in thirty contests, and was rising steadily up the rankings, but was still basically an unknown when he entered the ring on 31st March 1973 to face the former world champion Muhammad Ali for the NABF Heavyweight title. The ensuring upset, which saw Norton defeat Ali on points after 12 gruelling rounds, and breaking ‘The Greatest’s’ jaw in the process, made headlines worldwide, and turned an unknown fighter into a star. Seven months later the two met for the second time, and this time Ali got his revenge, but the fight was another hotly contested classic, with the split decision win for Ali, proving that Norton’s earlier victory was no fluke.

Despite losing the Ali rematch, Norton was granted a world title shot against the then seemingly invincible George Foreman, and was stopped in the 2nd round after being floored three times. This defeat, like his later losses to Earnie Shavers and Gerry Cooney showed that Norton’s style left him vulnerable when pushed back by big punchers. These defeats have hurt Norton’s legacy somewhat in the years since his retirement, with the perception of him lacking durability. However it is worth remembering that Foreman and Shavers were two of the hardest punching heavyweights in the history of the division.

After the Foreman defeat Norton built up a string of victories, which included a impressive 5th round win over Jerry Quarry, before facing Muhammad Ali for the 3rd time on September 28th 1976, this time with the world championship on the line.
After what turned out to be the pairs least exciting, but most controversial clash, Ali retained his world championship on a narrow but unanimous points decision, after outfoxing Norton with his ’rope-a-dope’ strategy. Norton wept at the verdict, believing he had won.

Throughout his boxing career Norton was a strong believer in the power of positive thinking, and he bounced back from the Ali defeat with a win over the ultra slippery Jimmy Young, on 5th November 1977 in a fight billed as a WBC world title fight eliminator.

On March 18th 1978 Norton was declared ‘World champion’ by the WBC, after newly crowned world champion Leon Spinks, having beaten Muhammad Ali in February, decided to grant ’The Greatest’ a rematch, rather than face the WBC’s number one contender Norton.

Norton made the first defence of his ’world title’ on June 9th 1978 against an unbeaten young contender named Larry Holmes, who had modelled his style on Muhammad Ali. The two men took part in what is considered by many as one of the greatest heavyweight title fights ever, culminating in probably the single most frenetic last round of a heavyweight title fight ever seen, with both men stood toe to toe, pummelling each other. After 15 rounds Holmes was judged the winner via split decision, and Norton was left with the ironic record of being the only heavyweight champion never to have won a world title fight. A cruel label for such an outstanding fighter. Holmes would later prove himself to be one of the great champions.

Norton’s career went into decline after the Holmes fight, he was koed in the 1st round by the huge punching Earnie Shavers, in March 1979 and then held to a draw by Scott Ledoux that same year. After over a year of inactivity, Norton looked a faded force when he narrowly outpointed Randall ’Tex’ Cobb in late 1980, and six months later a brutal 1st round stoppage loss to Gerry Cooney signalled the end of Norton’s career.

After retiring from the ring Ken Norton was still in demand, and took part in a number of films in addition to becoming a popular boxing commentator during the early and mid 1980s.

Norton had emerged from his boxing career fit and eloquent, so it was a cruel quirk of fate when he was left clinging to life after a severe car crash in 1986. Doctors doubted that he would survive, let alone walk or talk again. But with the fighting spirit and positive thinking which had served him so well during his boxing career, Norton survived and made a remarkable recovery, although he was left with impaired speech and movement from his injuries.

In the years since the 70s and 80s the boxing fans fascination with the ’golden era’ of heavyweight boxing has grown and grown, just as interest in the modern day division has diminished. Norton was a frequent guest at boxing memorabilia shows and was always happy to talk to fans about his boxing career. After being part of such a talented era, his own ability is often underrated. Had Ken Norton been part of a less talented division, it is highly likely that he would have been the dominant heavyweight of his era. As it was Norton was one of the best, in a golden era which is unlikely ever to be repeated.