This Saturday, Frank Warren Promotions brings a huge 12 bout show to the Copper Box Arena in London, England. This will be the first boxing event held at the former 2012 Olympic arena and features five scheduled 12 round contests with multiple BBBofC and Commonwealth title holders appearing on the card. 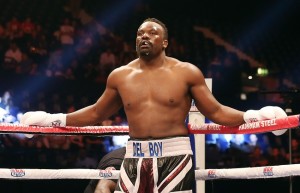 Headlining the show is undefeated Billy Joe Saunders (18-0, 10 KO’s) facing also undefeated John Ryder (15-0, 9 KO’s). On the line are Saunders BBBofC British and Commonwealth (British Empire) middleweight titles. Saunders has held both belts a little over a year; he won the Commonwealth title in April of 2012 stopping Tony Hill in one round and in December he took a 12 round decision over Nick Blackwell to add the BBBofC title to his accomplishments. Saunders also holds the WBO International middleweight title (not on the line) which he won in his last outing this past July defeating Gary O’Sullivan by 12 round decision.

This is Ryder’s first chance at a title belt. He’s coming off a second round TKO of Yoann Bloyer in July and earned this opportunity back in December when he won an elimination bout against Eamonn O’Kane, taking an eight round decision.

In the cards main supporting bout, Dereck Chisora (17-4, 11 KO’s) takes on Edmund Gerber (23-1, 14 KO’s) for the vacant EBU heavyweight title. In just 21 professional bouts, Chisora’s racked up plenty of solid experience and has made quite a name for himself with his prefight antics. His losses have all come against top notch opponents, and he’s only been stopped once.

After going undefeated in his first 13 bouts, and winning fights against Danny Williams and Sam Sexton, he made a huge jump in class and eventually fought for the world heavyweight crown; within a two year span, he fought and lost to Tyson Fury (L12), Robert Helenius (L12), Vitaly Klitschko (L12), and David Haye (TKO by 5). The controversial nature of his loss to Helenius earned him his shot at world title holder Klitschko, where he generated headlines by slapping the champ, the only clean shot he’d land, and was soundly beaten the next night. He’s coming off two consecutive stoppage wins over Hector Avila (TKO 9) and a controversial stoppage over prospect Malik Scott (TKO 6) where he won the WBO International heavyweight title.

Gerber is coming off an eight round victory over Gbenga Oloukun in March. His most notable opponent is Michael Sprott, who he knocked out last September, but lost in a rematch three months later in what has been his only 10 round bout to date. He holds victories over American trial horses like Zack Page, Darnell Wilson and Maurice Harris.

Undefeated Frankie Gavin (16-0, 12 KO’s) puts his titles up against David Barnes (27-2-2, 11 KO’s). Gavin holds the BBBofC British and Commonwealth (British Empire) welterweight titles and is a former holder of the WBO inter-continental welterweight title and the Irish light welterweight belt. Last November a 12 round decision over Junior Witter won him the BBBofC title, the Commonwealth belt coming this past June when he stopped Denton Vassell in seven rounds.

David Barnes is a former holder of the BBBofC British light welterweight title back in 2004. He took part in the Prizefighter tournament in 2009, but lost in the quarter finals to Colin Lynes. He’s won his last three bouts; all six round decisions.

Super featherweight Liam Walsh (14-0, 10 KO’s) defends the Commonwealth (British Empire) title against Joe Murray (14-0, 5 KO’s) in a bout that will also decide the new holder of the now vacant WBO International super featherweight title. Walsh is going on three years as the Commonwealth champion, winning the title in 2010 with a 12 round decision over Maxwell Awuku, but he’s made just two defenses, the last being two years ago.

Joe Murray is a former IBF Youth featherweight titlist. After fighting just once in 2012, he notched two wins in 2013 with eight round decisions over Dai Davies and Dan Nayler.

In the fifth 12 round contest of the night, undefeated fighters Paul Butler (12-0, 7 KO’s) and Miguel Gonzalez (17-0, 5 KO’s) contest for the vacant WBO Intercontinental super flyweight title. Butler currently holds the BBBofC British and Commonwealth (British Empire) super flyweight belts and had only made one defense of the Commonwealth title in his last outing: a fourth round knockout of Najah Ali in June.

Gonzalez is the newly crowned South American super flyweight champion. He fought just one month ago, winning an eight round decision over Carlos Frias.