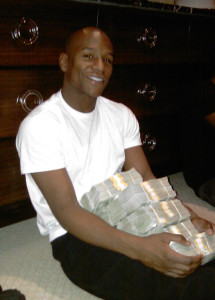 As reported in Forbes, boxing fans have made it rain all over “The One” and, in doing so, have helped break some long-standing records. So far, here’s what the early data indicates:

When all is said and down, “The One” will likely have generated more than $200 million in revenue with Mayweather likely to earn a record high $80-100 million for his majority decision victory over the 23-year-old Alvarez.

For his part, the red-headed battler from Guadalajara, Jalisco will likely take away more than $10 million for his spirited, but losing effort and a unique, star-igniting level of exposure at the sport’s mainstream level.

Already regarded as the biggest boxing draw in his native Mexico, Alvarez’s status as no. 1 was affirmed by reports earlier in the week that his bout with Mayweather, broadcast for free on Televisa, was the highest rated boxing broadcast in Mexican history. Achieving a 41.1 rating, Mayweather-Alvarez earned a 77 share, meaning that nearly 8-out-of-10 households in Mexico with a television set tuned in.