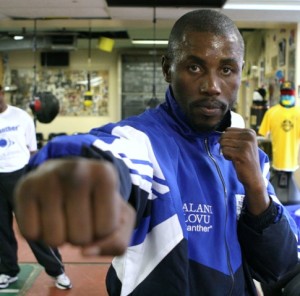 Ndlovu is on a losing skid, dropping his last three by 12 round decision. A two division champion, he’s held the WBF and IBO featherweight titles as well as the IBO and IBF super bantamweight belts. His ledger includes a spilt pair of bouts with Steve Molitor and two losses to Jeffrey Mathebula. Fana is a former IBF featherweight champion and is also on a losing streak, dropping his last two bouts and being stopped in four rounds in his last outing by Paulus Moses. This bout is for the vacant Pan African super featherweight title.

Truax only loss came to former middleweight champion Jermain Taylor. He’s faced a few well known journeymen along the way, Antwun Echols, Jonathan Reid, and Matt Vanda among them. In June he stopped Don George in six rounds. Fort is fighting his fifth bout of the year. In April he lost to John Jackson, but came back in July to score an eight round decision over Marcus Upshaw who he had drew with back in 2011. At stake in this bout are Truax’s Minnesota State middleweight title and the vacant USBA middleweight title.

Mathews has been around, and he’s fought some of the U.K.’s top fighters. He holds a win and a draw over Anthony Crolla, a draw and a loss to Gavin Reese, and has fought in the lightweight and super featherweight Prizefighter tournaments, making it to the semi-final round in the prior, and the finals in the latter, being stopped in two rounds by Gary Buckland. He’s held multiple titles in the featherweight and lightweight divisions, and his last outing, a 10th round stoppage of Tommy Coyle in July won him the vacant Commonwealth (British Empire) lightweight title. Curtis Woodhouse had a good thing going until late 2010, since then he’s been on and up and down ride, alternating wins and losses along the way. He had a short stint as the BBBofC English light welterweight title holder but lost the belt to undefeated Shayne Singleton earlier this year. His last two bouts were stoppage wins over Sandor Horvath (TKO 1) and Joe Elfidh (TKO 3).