Manny Pacquiao puts in a grueling three-hour workout at the Wild Card II, a gym the Filipino icon constructed in his hometown of General Santos City in the Philippines to duplicate his former American training base in Los Angeles. Trainer Freddie Roach is due to join him the first week of October to begin official preparations for his November 23 bout with Brandon Rios in Macau, the off-shore Chinese gambling mecca best known for deregulated vice and an anything goes attitude. 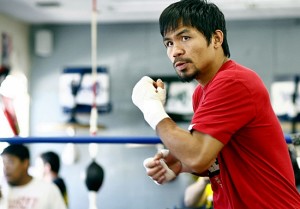 Pacquiao is busting up the hands of assistant trainer, Buboy Fernandez, who has to take a break from the mitts and hand them over to another assistant, Nonoy Neri. Not long after, Neri has to hand them over to yet another member of the coaching staff.

“Manny’s punches are too heavy,” Neri told the Manila Standard Today after four rounds of mitt work with Manny “We really need to take turns doing the mitts otherwise we’d all have broken hands before this 10 weeks of camp.

“This is absolutely the first time that I saw Buboy quit,” Neri continued “I think Manny’s punching power has not abandoned him despite almost a year in hibernation.”

This has been the first time in a long time that the beginning of a Pacquiao training camp hasn’t been greeted with unbridled panty-wetting joy by the click-hungry boxing media.

But admittedly, a lot has changed in about a year’s time.

Back before his sixth round KO loss to Juan Manuel Marquez last December and subsequent decision to make himself an Asian casino attraction, Pacquiao’s every move was chronicled by a fawning media that would even turn his airport arrivals into front page fodder to attract cheap traffic from Pacquiao’s legion of loyal fans.

With Pacquiao now spending the lion’s share of his time in Asia, though, the media days, the random photo ops, and the chance of press row hobnobbing on fight night have been taken away from the American fight media.

As a consequence, the media sold the holy hell out of Floyd Mayweather-Saul Alvarez, bending over backwards to embrace the Mayweather character they so despised back when they had the Pacquiao gravy train keeping them chubby with free food and bartered access.

Pacquiao-Rios is not likely to get the same level of obscene media salesmanship as Mayweather-Alvarez, but promoter Bob Arum will try his damnedest to whip the media into a frenzy for the card.

Reportedly, Arum has already cooked up a plan to bring a select few boxing writers over to Macau, mostly on his dime, to cover the fighters’ last days of camp and report on the fight. Expect that “select few” to be of the lapdog variety, more than willing to turn some tricks for the coolest of all “look where I’m at ” Tweets.

But the buzz still won’t be the same…and neither will the sales.

Forbes recently came out with a crudely-reasoned article saying that Pacquiao lost out on about $100 million because of his inability to get everything together for a Mayweather fight.

The reality is that Pacquiao may have benefited greatly from the never-made mega-fight, easily earning more than losing by playing a perpetual game of bait and switch with the buying public.

For three full years, Team Pacquiao and Arum dangled a possible Mayweather bout over eager consumers while selling Pacquiao vs. someone else. Mayweather was always next, possibly next, going to be next. When Pacquiao wasn’t coming to terms for Mayweather bouts that were never being negotiated, Arum was busy negotiating with empty chairs about a fight that nobody was pursuing. The truth of the matter, however, is that Mayweather-Pacquiao was only close to happening once, in the beginning of 2010 when Pacquiao killed the deal by refusing random blood testing in favor of testing with a set cut-off date.

During this time, Arum played the media like a fiddle, leaking false info and propaganda to a group of slack-jawed, star-fucking media twits who have a tremendous talent for displaying willful ignorance when it’s in their best interest to do so. Despite the fact that no talks had ever gone on since negotiations fell apart in early 2010, Arum and the media helped create the impression that there was, indeed, some movement behind the scenes. There wasn’t.

Also, during this time, Pacquiao reaped the benefits of being everybody’s darling– the good guy, the impish little sweetheart painted as equal parts St. Thomas Aquinas and Bruce Lee. Endorsements came streaming in as Pacquiao became the exotic pet of the Hollywood pseudo-fight fan.

Bouts against Joshua Clottey, Antonio Margarito, and Shane Mosley got way more play than they should have and earned him inflated paydays for relative soft touches. Those three fights led into a questionable decision over Juan Manuel Marquez, a putrid decision loss to Timothy Bradley, and his face-first KO loss to a thrice-cheated Marquez.

Ultimately, Arum and company knew what they were doing by keeping their meal ticket far away from Mayweather.

Yes, there was the chance that Manny could’ve won. But Mayweather was worth much more to Team Pacquiao as the “cowardly” villain being perpetually chased by the humble superhero. The idea of humbling Mayweather became just as much a part of the Pacquiao mystique as anything he did in the ring. Yeah, he may be fighting a shot and scared shitless Shane Mosley, but only because Mayweather is yellow…now watch what he does to Mayweather in effigy!

Each bout was marketed the same. Manny was only fighting this guy because Mayweather is scared, but when the fight is over, nary a word is mentioned about Mayweather until after the next opponent is chosen and the next press tour begins.

But it’s going to be tough to play that game again. Even the buffet-diving media has a strict “fool me once, shame on you…fool me seven times, shame on me” policy. Unless souvenir paper lanterns and massage parlor happy endings are truly plentiful for those lucky few chosen to ride with Team Top Rank, the ship has sailed on being able to leverage a possible Mayweather bout into the sales pitch for Pacquiao-Rios.

Floyd Mayweather is on top of the world right now, riding a wave of unprecedented positivity and insisting that Pacquiao “had his chance and blew it.” If Mayweather-Pacquiao ever happens, it’ll be because Pacquiao came to Mayweather, with hat in hands and concessions ready to be conceded. This is no longer a bout made on equal footing and, at this point, nobody expects it to be a 50-50 business affair.

But Manny Pacquiao is in Asia now, closer to home and further away from the buying public that made him a superstar. He’ll be paying a 12% Chinese tax on a guaranteed $18 million purse, according to Arum, with more to come after pay-per-view numbers are in. It’s $2-4 million less of a guarantee than in recent fights and by Arum’s own estimate, a Macau-based PPV could cost him up to half of his PPV buys.

All along, Team Pacquiao’s assertion that a tax hike of 4.6% ran Manny out of the country was worthy of a wink-wink, nudge-nudge. Now, we’ll likely get a chance to see a complete wash as Manny takes home a larger share of a smaller purse and Arum works his wizardry to make it not seem that way.

But all of this may be leaving Pacquiao right where he needs to be. At his core, Manny Pacquiao is a fighter and as good as he is at all the other stuff, everything else just takes away from what he was put on Earth to do.

No more subterfuge, sleight of hand, and double talk. Win or lose, Mayweather’s not an option and, whether it be for tax purposes or for other reasons, Manny’s probably not coming back to America. The only thing to sell in the days leading up to the Rios bout is the actual fight, itself– and it will be a good one.