Apparently, all the drama over weight has been settled and Saturday’s Julio Cesar Chavez Jr. vs. Brian Vera bout is a go as the second part of an HBO split-site doubleheader also featuring Adonis Stevenson vs. Tavoris Cloud. 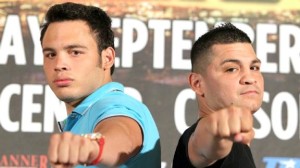 Originally booked for 163 lbs., the weight limit has been changed three times since then, bumped up to 165, 168, and now 173 due to the second-generation fighter’s inability (and lack of desire) to make any one of the limits.

In exchange for allowing yet another weight change for the bout, Vera will be receiving an undisclosed amount of money. The bout will also go from being a twelve-round contest to a ten-round affair.

Chavez (46-1-1, 32 KOs), despite revealing a disregard for the importance of this fight and his opponent, should still be a heavy betting favorite coming into this contest. Stronger and just all-around better than Vera, Jr. will also be sporting a huge weight advantage, perhaps around 30 lbs. of pure bulk by the opening bell.

Vera (23-6, 14 KOs) has developed a reputation as an upset artist with surprise victories over Andy Lee, Sergio Mora, and Serhiy Dzinziruk over the course of a nine-year career. Realistically, though, he may lack the firepower and refined skills to beat even a complacent, dismissive Chavez. Factor in the reality that most of his career has been spent in the 160-163 lb. range, with just a small handful of bouts at 168, and surviving through ten rounds may be an uphill climb for the tough Texas native.

Despite agreements across the board, the weight issue is still not 100% resolved as Vera’s trainer, Ronnie Shields, has threatened to pull his fighter if Chavez fails to make the 173 lb. mark at the weigh-in, Friday afternoon in Carson, California.