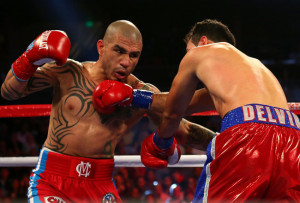 But it wasn’t like Rodriguez was really going to win. Come on.

In this fight, there were two PRs—Puerto Rico and Public Relations. Rodriguez was chosen to go down in impressive fashion, but not after putting up enough of a fight to make it seem as though Cotto had truly accomplished something.

Unfortunately for Top Rank and Team Cotto, Rodriguez, a solid fighter with nothing but second and third-tier experience, got that deer in the headlights look at the opening bell and scrambled frantically around the ring, running for his life in classic Chicago Bears Rex Grossman fashion. Cotto would finally catch up to him and nearly put him out at the end of the second round before finishing the job early on in the third. Given the little resistance offered by Rodriguez, it was an accomplishment on the scale of man squashing ant under work boot.

Still, the media lit up.

He’s back! The old Cotto has returned! Better than ever under Freddie Roach!

Saturday’s card was named “Reloaded” and the talking points all throughout the buildup circled around the rebirth of Cotto and his veteran efforts to close his career the right way. That’s the story his team wanted to sell and, unless something crazy happened in the ring against Rodriguez, the media was more than ready to repeat what had been dictated to them for the last couple of weeks.

The reality of the situation is that Cotto, who earned a little over two million dollars of desperate HBO money for this one-sided romp, is the same Miguel Cotto as always. Common sense and common boxing sense can say nothing else.

There’s that little bit of jackrabbit in Cotto that always keeps him from beating the best of the best. He’s not a machine pushing forward, taking shots and devouring souls. He’s a guy who will come forward as far as he’s allowed and when he meets resistance and is hit and hurt, he will give ground and assume the beta dog position– it’s in his character, it’s what has kept him from being an all-time great, despite having the skills to be one. This isn’t something that can be corrected by a new trainer or an extended vacation from the ring.

But don’t tell this to the boxing media experts—perhaps the biggest group of sports media with the least amount of combined actual hands-on experience. Selling a storyline to them is like selling free media buffets to, well, them. So…

He’s back! The old Cotto has returned! Better than ever under Freddie Roach!

There was some issue regarding Cotto’s status as a free agent after Saturday’s fight. Unfortunately for fight fans, although nothing is on paper, Cotto seems to be firm on staying loyal to the company that just led him to one of his biggest paydays for one of his easiest nights of work.

“For that fight to occur [Cotto vs. Saul Alvarez], Top Rank and Golden Boy Promotions would have to sit down and talk about it,” Cotto said at the post-fight press conference. “It’s not closing doors, but we need to talk about it.”

Yes, Top Rank made him a star, but they also allowed him to be strong-armed into conceding every possible advantage against Manny Pacquiao in the biggest fight of his career. They also completely turned their backs on him in the wake of the Antonio Margarito “Plaster Gate” fiasco, refusing to address the possibility that Margarito had bludgeoned him with cement-laced hand wraps in their first bout. The promotional company did make him rich, but he was always the ugly step-child there, ready to be sold up the river for the right chunk of change.

More and more these days, Bob Arum’s Top Rank Promotions stands for big bouts that are promised, but never delivered. And the perpetual bait and switch game played by them will result in all of the best possible Cotto match-ups being floated as rumors to the media while Cotto fights second tier guys until Top Ranks gets some beast of a kid and wants to fatten his resume with a win over a possible future Hall of Famer.

So, forget Cotto-Canelo Alvarez or any other scintillating potential bout, unless Top Rank owns the other half of the match-up– and, at 154 lbs., they simply don’t have the horses. Sergio Martinez at middleweight is an interesting possibility for Cotto, but don’t expect any movement to be made until the Lou DiBella-promoted fighter returns to the ring and looks sufficiently decrepit.

If Cotto is smart, he milks this public relations bonanza for another big money drubbing of ESPN2 talent before snatching up some sort of random world title. HBO, for the first time in its history, is becoming a second place presence to chief rival Showtime in the cable boxing wars and they desperately need Cotto to bring some added fan appeal to their roster. The big money will keep flowing for the fighter regarded as, arguably, boxing’s third biggest draw.

A smart Cotto would also remain a free agent, working under the protective embrace of Top Rank when possible, but always ready to grab at the big money fight when necessary.

In the meantime, while these things are sorted out, Cotto will enjoy nothing but positive press.  The Boricua battler is easy to love. He’s an honest and earnest fighter who deserves the loyalty of a fan base he has never intentionally let down. And regardless of who is running the machinery behind the Cotto hype factory, it can be guaranteed that they’ll be allowed to tell any tale they like as long as the boxing media keeps getting the right press releases.

You can email Paul at paulmagno@theboxingtribune.com or watch as frat boy bloggers mock his inability to Tweet properly. Paul is a full member of the Burger King Kids’ Club, a born iconoclast, and an ordained minister in the Universal Life Church.