The once promising prospect Allan Green takes a trip down under for a shot at the vacant IBO light heavyweight title against undefeated Aussie, Blake Caparello. The hard punching Green made a big name for himself in 2005 with a highlight reel knockout of Jaidon Codrington on ShoBox, but never reached the heights many expected; since 2009 he’s tallied a .500 record of 3-3. Caparello won the PABA light heavyweight title in his last bout, and has held numerous regional titles since his third pro fight. He fought and beat Aaron Pryor Jr. last year, but Green will be the best opponent he’s faced so far.
This bout took place Thursday, October 17, 2013, Caparello won via 10 round unanimous decision

Headlining the Nordic Fight Night card, undefeated Skoglund looks to pick up the vacant EBU-EU light heavyweight crown. He’s a former holder of the WBC and WBO youth titles; this is his fourth bout of the year. Mock is a familiar name, and a win some-lose some type of fighter. He’s held a slew of regional belts over the years but has been inactive recently, fighting just once once in 2011 then didn’t fight again until 2013.

Also on the card is light middleweight prospect Torben Keller (8-0-1, 2 KO’s) facing a guy familiar to U.K. fans in Bradley Pryce (34-13, 18 KO’s). Keller is a fan favorite in Denmark, and an accomplished amateur with wins in the Danish and Nordic Championships and a trip to the World Championships in 2009. He’s facing a good test in Pryce, who’s fought his fair share of top talent in the U.K. and a former holder of the Commonwealth light middleweight title. 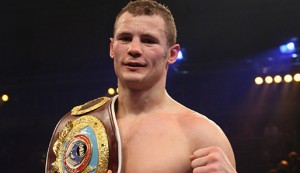 In his second reign as WBO super middleweight champion, Stieglitz makes the second defense of the world title. He first won the title in 2009 and made six successful defenses before being dethroned by Arthur Abraham in 2012; his only defeat in his last 15 bouts. He faced and stopped Abraham in a rematch earlier this year to regain the title and has made one defense, stopping Yuzo Kiyota in 10 rounds in July. Ekpo is a former Nigerian light heavyweight champ, West African Boxing Union and WBO Africa title holder. As an unknown, it’s easy to write him off but as Arthur Abraham found out, sometimes the unknowns bring a good fight with them.

On the Stieglitz-Ekpo under card, Charr defends his three regional titles and looks to grab a fourth. The WBC Baltic, WBC International Silver, WBC Mediterranean, and vacant WBC CIS / Slovenian Boxing Bureau heavyweight titles are all up for grabs…if that means anything to you. Charr’s won three bouts by quick stoppage since a losing effort to Vitali Klitschko in 2012, the only loss in his ledger. Bakhtov comes in with a 3-3 record since 2010, last winning over British fighter Danny Williams in December. He’s a former PABA and WBC Asian Council title holder.

In a scenario of two win some-lose some fighters facing each other, Vanda holds the edge in opposition faced. Over the years he’s been in the ring with fighters like Julio Cesar Chavez Jr. (twice), John Duddy, Peter Manfredo, Yori Boy Campas, Caleb Truax, and Marco Antonio Rubio. Though he loses when he steps up, he’s only been stopped twice, so he’s not an easy guy to put away. Wellby hasn’t fought anyone of note; taking undefeated George Tahdooahnippah six rounds (and losing) was his most recent accomplishment.

After beating Olusegun Ajose in July, Hammerin’ Hank looks to stay busy in the main event, but has yet to know who he’s fighting.

Also on the card is Chazz Witherspoon (30-3, 22 KO’s) facing Derek Bryant (20-7-1, 17 KO’s). Cousin of former world heavyweight champion Tim Witherspoon, Chazz was a heavyweight hopeful, but hasn’t seen much success against top level opposition. His three defeats all came against better fighters in Chris Arreola, Tony Thompson, and in his last bout, Seth Mitchell. On two of those occasions he was stopped, and was DQ’d against Arreola. Bryant was 16-0 before hitting the skids; since beating Damon Reed in 2003 he’s went 4-7-1 and has only fought once a year since 2005, not fighting at all in 2009 or 2011.