“Al” and “Haymon”, when uttered in tandem, are two of the most polarizing words in the sport of boxing today. Those two words comprise the name of the nigh-faceless, most powerful man around. Say that name and fighters aligned with him will sing his praises. Say that name again and the power brokers in dark offices lament his very existence. Say that name yet a third time, and like Beetlejuice, pale, pock-marked bloggers and journalists pop up in protest and in support of the power brokers who keep their lights on. 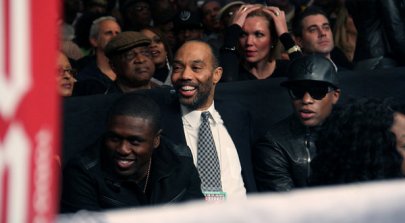 Is Al Haymon as bad as his critics would lead you to believe? If he is, why is former harsh Haymon critic Paulie Malignaggi on the verge of signing a deal with him (according to a recent report at Boxing Scene)?Why have fighters flocked to him in droves in recent years?

Since Haymon slipped quietly into boxing in the early part of the last decade and brought the late Vernon Forrest to the forefront of the sport, he’s quietly formed an army with which he’s dominated the HBO, and now Showtime airwaves. Haymon parlayed his success with Forrest into a management deal with Floyd Mayweather Jr. It is said Haymon helped Mayweather buy his Top Rank contract for a mere $750,000. Mayweather and Haymon have gone from that $750,000 all the way to record guaranteed fight purses.

A lot of what is wrong with boxing is blamed on Al Haymon. To some in the media, it is as if Haymon is responsible for the creation of the mismatch. He doesn’t talk to the media, and as such, is an easy target. Many of the more vile pigs at the trough routinely feed info to certain members of the media, and are given much more rope than Haymon. It is, however, the powerful, unseen hand of Haymon that has guided Mayweather’s career from the middle of the pack to running circles around everyone else. Because of this high profile success he has a deep roster of fighters, all of whom are well paid and receive prime exposure. Haymon works almost exclusively with Golden Boy fighters, with the exception of a select few with smaller promoters. Guys like Gary Russell Jr (who some may remember I recommended he “Shit or get off the pot”), is unburdened by an exclusive contract with a promoter, yet still gets premium cable airtime and is in line for a world title shot, despite a resume as thin as an Olsen twin.

It is clear that Haymon is not a popular man amongst the suits. You must ask those he represents to get the other side of the story.

“I think a lot of fans misunderstand the business aspect of boxing. Al Haymon is someone who opens up opportunities for people. He does his best to represent his fighters and if you were in our position you would want to be associated with a guy like him. He does his best to get his fighters out there if you put in the hard work. He gives you that opportunity, the one that a lot of fighters deserve.” – Keith Thurman, undefeated welterweight contender, in a September 2013 interview with KO Digest.

“It’s not a secret, Adrien Broner (client of Al Haymon) was the challenger in my last fight and he made more money than me. It’s those things that at the end of the day when he called me – giving me the whole game plan and trying to get me to bite on it. And I thought that it sounded positive and thought ‘if I continue to fight then this is the way to do it.’ The competitor in you still wants to fight but you just don’t want to deal with the politics, the extracurricular stuff and working so hard and not being sure if things are going to work out for you. I felt that having that addition to my team made sense if I wanted to keep fighting.” Paulie Malignaggi, former two-division world titlist, who is rumored to be signing with Haymon.

Al Haymon is a fighter’s dream, and boxing promoter’s worst nightmare. He doesn’t conduct himself like an established boxing man. He’s earned a reputation as a guy who gets his guys the most money, often at the expense of the promoters. Some feel Haymon operates within the gray area between manager and promoter. But the evidence shows that Haymon’s influence has a profound upward effect on the career paths of those he represents.

Is Al Haymon bad for the sport? In some ways, yes, he is. His fighters occupy prime television slots, and occasionally get top dollar for glorified sparring sessions. But if you’re an advocate for a fighter’s rights, fair compensation, and the end of the slave-plantation relationship between fighters and promoters, Al Haymon is a guy on the right side of the line.