It’s become so routine to see the world heavyweight champion Klitschko brothers be the victims of lazy attacks from a select group of played-out American boxing writers on deadline, that when one does come across any coherent, well thought-out article featuring one or both of the brothers, it comes as a bit of a shock. 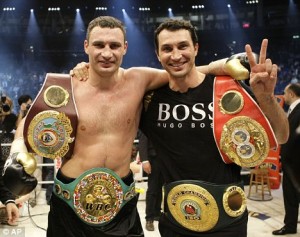 Nevertheless, this past week has seen a couple of interesting think pieces in the press regarding the brothers, articles that don’t descend into the push-button negativity seen in material penned by the aforementioned anti-Klitschko tribe.

On the Russia Beyond The Headlines site, writer James Ellingworth offers up an interesting think piece (http://rbth.ru/arts/sport/2013/10/17/culture_clash_in_the_boxing_ring_30883.html) on the culture clash created by the recent match-up of Ukrainian champ Wladimir Klitschko with top Russian challenger Alexander Povetkin (Klitschko won by a wide unanimous decision).

It surely wouldn’t occur to many of the cyber-slobs who criticize Wladimir as if it’s a boxing writer requirement that something quite culturally significant was taking place when Wlad and Povetkin met in Moscow. Yet Elllingworth shows us that this was exactly the case.

For much of the Russian crowd, he says, the fight pitted the modest, nationalistic everyman Povetkin against an outsider, the jet-setting, multilingual world citizen Wladimir Klitschko (who is set to marry Hollwood actress Hayden Panetierre later this year). While many in America who paid any attention at all might have just seen two boring “Russians” fighting one another, Ellingworth paints a very different picture.

“Wladimir Klitschko and Alexander Povetkin’s paths both began in the 1980s Soviet Union, but what has happened since their fight shows how they have diverged,” the writer contends.

“Povetkin was a hero” for much of the assembled in Moscow, Ellingworth explains.

“A kindred spirit, patriotic and uncomplicated, the essence of a Russian muzhik….Muzhik-ness is a curious concept – the best equivalent is an ordinary Joe, a bloke if you’re British, but with something more. From a word originally referring to a peasant lad in Russia’s centuries of serfdom, muzhik has become a way of life – anti-intellectual, chain-smoking, a man who’s happier with a beer in the yard than a fine wine in a restaurant and who wants the world to know it.”

As opposed to this, the Ukrainian Klitschko represented something more exotic and “foreign.”

“The Klitschko brothers’ multilingualism and globetrotting – childhood in Poland, based in Germany, frequent spells in the U.S. – are reminiscent of emigre Soviet intellectuals, and their commercial acumen in the cut-throat world of boxing has echoes of the oligarchs,” says Ellingworth.

As such, Ellingworth contends that much of the Moscow audience resented Wladimir and felt more comfortable rooting for the everyman underdog, who ultimately came up short. The reasons he gives for this — some of which he ties to race riots in Southern Moscow recently — are both interesting and at times discomfiting, with Povetkin for some representing a total rejection of Russian engagement with the outside world.

Rather than take usual shots at the title reign of the brothers, Barra tries to encapsulate many of the arguments that Klitschko fans (who do exist in North America!) have made for years regarding the unfair nature of much of what is thrown at the Ukrainian boxing champs by snippy sports media types here.

One of the main reasons for anti-Klitschko sentiment would seem obvious and emerges from a scan of Barra’s article: nobody (much less Americans) likes having something they prized, something they thought belonged exclusively to them, taken away.

It wasn’t the Klitschkos, but Canadian-Brit Lennox Lewis (loved in retrospect by Klitschko haters but not very popular when he was actually fighting) who first took the heavyweight title(s) away; the Klitschkos have merely continued the post-Lewis foreign domination of boxing’s former “glamor division,” the division that the general sports fans always cared about even while ignoring the rest.

The answer is: they don’t.

“The heavyweight division . . . in particular, has begun to look especially different from its all-American past—and some U.S. fans may still be adjusting,” Barra asserts.

“As Norman Mailer once put it, the heavyweight champion of the world is either the toughest man on the planet or he isn’t, but there’s a very good chance that he is.

“So here’s a theory: It may be hard for some American boxing fans to acknowledge that the toughest man on the planet isn’t perennially American anymore (and hasn’t been for some time, as the last time a U.S. man held any part of the heavyweight title was in 2007). For example: When Klitschko emerged as a dominant force in the heavyweight division around 2005, some skeptical American boxing writers—and other boxers—compared him to Dolph Lundgren’s character in Rocky IV: the loutish, steroid-pumped brute Ivan Drago.”

Ahhhh yes. Unfortunately for the Klitschkos, there was a ready-made negative stereotype from a very popular film just waiting for them as they arrived on American shores. And that stereotype underlies much of the criticism they still take as being “mechanical, boring robots” (I should point out that they are actually not the same person, and that Wladimir and Vitali actually have very different approaches to the sport).

Unfortunately, Barra gets a few facts wrong here (Wladimir has never run for political office; it is Vitali who currently is the head of the pro-Western UDAR [“Punch”] Party in Ukraine). But it’s still refreshing to see a mainstream press article that doesn’t haul out every hoary old cliche about (ahem) “Russian” heavyweights to bash the brothers over the head with them.

In regards to Wladimir’s continuing, lengthy (over seven years) reign as world champion, “to ignore athletic achievements like those is to ignore real, rare greatness,” writes Barra.