10 years after its initial 12 episodes ran, HBO’s “Legendary Nights” program returns this Saturday night, and couldn’t have picked a better way to premier; the Arturo Gatti-Micky Ward trilogy will be the topic of the program. 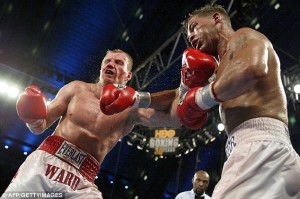 The acclaimed HBO series originally aired in 2003, featuring episodes covering 12 of the biggest fights in recent decades of boxing history. Each half-hour long segment covered behind the scenes action, fight high lights, and post-fight fallout. The return program will be an hour in length, and cover all three epic bouts between Arturo Gatti and Micky Ward, which took place within an 11 month span from mid 2002 to 2003.

Mark Wahlberg, who played Ward in the motion picture “The Fighter”, will narrate the show, which will air after the live coverage of Mike Alvarado vs. Ruslan Provodnikov, which begins at 9:45 PM EST. If you’re not watching live, make the necessary adjustments to your DVR because you know how live sporting events play out.

There are no future installments of Legendary Nights set in stone just yet, but sources say that HBO Sports president Ken Hershman hasn’t ruled out future episodes if the response to Saturday’s program is favorable.