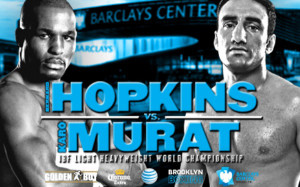 At this point in his career, every fight is history in the making for Hopkins, who at 48 years of age is the oldest world title holder in boxing history. He set the record in May of 2011, when he defeated Jean Pascal to win the IBO and WBC light heavyweight championships, bypassing George Foreman who had won two versions of the world heavyweight title in 1994 at age 45 when he knocked out Michael Moorer. The record setting performance was followed by two bouts with Chad Dawson that resulted in a no-contest and a loss respectively, but Hopkins broke his own record this past March when he took a 12 round decision over Tavoris Cloud to snag the IBF light heavyweight crown.

What keeps the former middleweight king at the top isn’t brute force or strength, but intelligence. Hopkins is smart inside the ring just as he is outside of it. Clean living and a dedicated training regimen since he entered the pro ranks in 1988 have kept his biological clock from advancing at a normal rate, which in turn has allowed him to retain his in-ring skills to a higher degree than fighters a decade younger. Even years after back to back losses to Jermain Taylor brought his middleweight dominance to an end, “B-Hop” continues to beat younger, stronger challengers; it’s not always pretty, but he gets the job done.

In Karo Murat, Hopkins is facing a once beaten fighter 18 years his junior and former holder of the IBF Inter-continental and WBO Inter-continental light heavyweight titles. The lone defeat on his resume came in 2010 at the hands of Nathan Cleverly, who was beating the Iraq born German convincingly before finally stopping him in the 10th round. Cleverly, who was undefeated at the time is arguably Murat’s toughest opponent. Since that loss, Murat’s won three of four bouts, defeating Christian Cruz and Otis Griffin before fighting to a 12 round draw with Gabriel Campillo, who he had already beaten in 2008. Following the Campillo bout, he fought once in 2012, defeating Sandro Siproshvili by seventh round stoppage.

Murat’s style makes him seem like a perfect fit for Hopkins; a straight up and straight forward fighter that will allow the defending champion to use angles, crafty defense, and his 18 year experience edge to his advantage. Murat’s stoppage at the hands of the light hitting Cleverly also has many wondering if Hopkins can end his knockout drought and score his first stoppage win in nine years; his last came over Oscar De La Hoya in 2004.

Saturday night’s bout will be the 31st world title affair in Hopkins 25 year Hall of Fame career. A win over Murat could lead to unification bouts with newly crowned WBO champ Sergey Kovalev or WBC titlist Adonis Stevenson; two knockout artists that would put Hopkins skills to the test. Also watching this fight closely is Nathan Cleverly, who views this as a gauge in comparing himself to Hopkins based on his stoppage of Murat.

Even at this point, Hopkins is just too good for Murat, who lacks the skills and experience to deal with the world champion. The question looms with each fight as to when Hopkins age will kick in and someone will lay his career to rest, but Murat’s not that guy. Hopkins retains the world title by unanimous decision.