Saturday night from the Boardwalk Hall in Atlantic City, Showtime brings us a Championship Doubleheader featuring the ageless Bernard Hopkins defending his light heavyweight title against Karo Murat. But the fight that will likely steal the show figures to be undefeated Peter “Kid Chocolate” Quillin’s (29-0, 21 KOs) WBO middleweight title defense against Gabriel Rosado (21-6, 13 KOs). The fights are set to begin at 9 PM ET/6 PM PT on Showtime Championship Boxing. 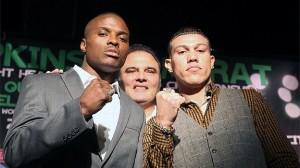 Rosado comes in as a better fighter than his record indicates. Two of his losses came within his first eight fights. Rosado dropped decisions to the aforementioned Fernando Guerrero and Derek Ennis, with a stoppage loss to Alfredo Angulo sandwiched in between. Rosado reeled off seven straight wins after the loss to Ennis, a streak which included wins over Jesus Soto Karass and Sechew Powell, before standing on the path of Gennady Golovkin (L TKO7) this January. Rosado rebounded with a spirited losing effort against well-regarded prospect J’Leon Love on the May 4 Mayweather-Guerrero undercard.

Rosado is fighting up in weight for the third straight fight, but is still curiously ranked as a junior middleweight by some fantasy rankings cliques. A win won’t strengthen Quillin’s claim to division superiority, but it keeps him moving and in good standing to face off with other contenders and champions who aren’t contractually obligated to HBO (Quillin is with Golden Boy and Showtime). Rosado’s recent claims of alleged impropriety on the part of Team Gennady Golovkin (altered gloves) would lead one to believe he’s poking the bear and setting up the basis for a potential rematch, in the event he upsets Quillin on Saturday night. Should Rosado come up short, he’s got plenty of options back down at 154 pounds should he choose to drop back down, as well as a few left at 160.

Quillin is a fighter that has shown marked improvement over the last two years. Despite a limited amateur background, Quillin moved along rather quickly in his career. Since signing with Golden Boy in 2010, Quillin has honed his craft at Freddie Roach’s Wildcard Boxing Club, mostly under the close watch of Eric Brown. He’s developed a very nice right hand, but his left hook is not quite as effective as it should be. Quillin has good hand speed, but tends to leave his head in one spot for too long and takes a lot of shots because of it.

Rosado is a fighter that doesn’t have any outstanding tangible attributes. His biggest asset is his heart. He fights at a high work rate. His aggressive style is aided by an above-average ability to cut off the ring. When Rosado gets his opponent trapped he mixes up his punches, throwing hooks to the head and body. He doesn’t have outstanding power, and will eat a lot of unnecessary shots because of it. Rosado is also a bit of a bleeder, which could be a problem again.

All-out aggression against measured explosiveness. Rosado will come out aggressive and probably force Quillin to fight off of his back foot early on. Quillin doesn’t have a high work rate and he’ll be forced to fight going backwards and pick Rosado off as he comes in. Quillin should work behind his jab and follow it up with straight rights when Rosado comes in. Rosado is slightly taller and longer, but he often fights shorter. The uppercut should be available on the inside for Rosado, but he’ll have to endure hell to get there. Look for Rosado’s corner to throw in the towel sometime around the 10th or 11th rounds, after a bloodied Rosado refuses to go down.