Hello family and welcome back to the highly anticipated and triumphant return of boxing’s Sunday Brunch — The number one weekend, quasi food-themed column amongst billionaire Russian Oligarchs. We were MIA for roughly two weeks due to HP repairing my laptop (again!), but fear not; we’re back with the same level of vigor that Clark W. Griswold has for 80s blondes driving ugly Ferraris. This week we’re going to be taking a quick peek back at the official Ruslan Provodnikov coming out party. Also on tap, we will be discussing the Showtime card that showcased Deontay Wilder’s 30th knockout, Peter Quillin and Gabe Rosado’s close fight and t 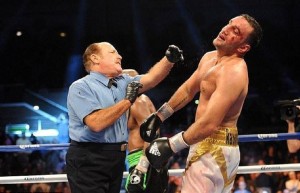 he Alien, Bernard Hopkins in the main event.

Much is being said about the Bronze Bomber’s 30th professional fight. Deontay Wilder is feasting on bums – he is knocking out hobos and washed up insurance salesmen – when will he step up?! All of these accusations have a basis in reality, but if you really take a close look at his situation I do think some breathing room should be allowed to the Tuscaloosa, Alabama giant.

This is a man who is 28 years of age, he first started boxing at 21 years-old – in 2005. To put it in the proper context, 2005 was the year that the famous Castillo/Corrales matches took place. Floyd Mayweather stopped Arturo Gatti in June of that year. Saul Canelo Alvarez was just 15! Speaking about Alvarez, the Mexican star started boxing at a very young age (13) and was facing taqueria empleados almost exclusively until he was 33-0!

Deontay Wilder wasn’t a guy who grew up boxing like a lot of successful fighters have. I consider his slow, deliberate pace on the job training and I do believe when Al Haymon moves Wilder into the real line of fire, he will be ready to bring a title back to the USA.

*On a vaguely related side note, the 6’6” Anthony Joshua from Hertfordshire in the United Kingdom also had a match on Saturday in Sheffield, England. The 2012 Olympic gold medalist, Joshua, secured his second professional victory (and knockout). It’s not far-fetched to think for a moment that perhaps in the future sometime Wilder and Jushua will clash in a match of giant Olympians.

— I enjoy watching Peter Quillin fight. He is at the same time compact and lanky. He has odd timing intervals and his punches come from interesting angles. Deceptive and clever, Kid Chocolate doesn’t waste a lot of punches. He does, however, have a problem adjusting. Quillin has a lot of upsides to his credit, but when presented with someone who wouldn’t wilt under his considerable power, he seemed to not have any answers; he didn’t appear to have the extra championship gear.

During their bout, Philadelphia’s Gabriel Rosado applied a lot of pressure, not necessarily the most effective pressure, but he was controlling some of the pace with his activity and work rate; Peter Quillin couldn’t really adapt. He kept the same pace, on his back foot attempting the occasional counter. Kid Chocolate showed spurts of good combination punching, but he definitely fought like someone who had lost a bit of confidence.

A lot of controversy erupted when the fight was stopped in the tenth round by the ringside physician. In the previous round, a perfect counter jab opened up a terrible cut above the left eye of Rosado, in the next several minutes the cut was opened even wider by the defending champion.  The call to halt the action was a wise one, it’s always a tough break for a fighter when something like a cut leads to a stoppage, but the gash was nasty and could have led to permanent damage.

–B-Hop. The Executioner. The Alien. Bernard Hopkins is truly a once in a generation type fighter. At 48 years young, the man who started his professional boxing career in 1988 is a world champion. Hopkins holds the distinction of being the oldest champion in boxing history, surpassing his own record as the oldest world champion. His bout with the 30 year-old Iraqi born German, Karo Murat last night served as a fine example of what the ageless wonder is all about.

Bernard Hopkins’ tactics can sometimes be hard to watch, preferring to smother his opponents and drag them into an ugly, awkward brawl. Saturday night, however, was a bit different for the Philly veteran – after six mostly pedestrian rounds, Hopkins cranked up his punch output and really put on an entertaining show. In fact, during the seventh frame, the Alien was talking smack to Murat’s corner while their charge was throwing combinations at him! Classic stuff from the future hall of famer.

–        Orlando Cruz and Orlando Salido met in Las Vegas earlier this month. I thought it would be much more apropos if they just fought in Orlando, Florida. Also, I missed out on the brilliant tagline “Taste the rainbow” when Cruz appeared at the weigh-in wearing a rainbow bikini…

–        When is boxing as a professional sport going to implement hit detection technology? This could easily (and relatively inexpensively) be placed in the gloves of the fighters, or perhaps be implemented through identification algorithm programs that are computer controlled and overseen by humans. This technology would take out all of the wonky Compubox statistics and put some real figures on the board.

–        The other day, Gabe Rosado was quoted telling Curtis Stevens to beware of Gennady Golovkin’s gloves (intimating that they were tampered with in his bout with the Kazakhstani). Not only is it extremely bad form to bring something like this up some nine months after the fact, but Triple G’s promoter went on the record proclaiming that Golovkin did indeed wear custom Grant gloves. They are customized to his particular outfit on the night of the fight. In addition, the gloves are a touch smaller to compensate for Gennady’s smaller hands.

The gloves, though, not only weighed the agreed upon 10oz for their middleweight title fight, they were inspected and approved by the NYSAC (New York State Athletic Commission) and then re-sealed in plastic. It’s extremely unlikely that major boxing glove manufacturer, Grant, who supplies gloves to stars such as Floyd Mayweather, the Klitschko brothers, Andre Berto, Chavez Jr. etc. would make a pair of gloves that would give an unfair advantage to a fighter. Rosado’s accusation included suggesting that the padding was perhaps moved to the wrist away from the knuckles. Such a design would be extremely unforgiving to a fighters hands, leaving them at a much higher than normal risk for injury.

–        Regarding referee Steve “Double S” Smoger’s overly officious activities last night during the Bernard Hopkins Karo Murat match – I’ll be the first to say how Smoger repeatedly chastised, pushed and ‘hit’ Murat was completely unwarranted and unprofessional. That said, SS has had a long career and most often he has done a pretty respectable job. I contend that Steve Smoger was probably just a massive Bernard Hopkins fan (he DID give him a hug after the fight) and perhaps he got caught up in the moment. While some criticism leveled in his direction would be warranted, I don’t think that he should be strung up by his heels.

–        How many boxers change their nicknames in their career? Floyd “Money” Mayweather used to be “Pretty Boy” Floyd. “Iron” Mike used to be known as “Kid Dynamite”. Most recently the  immortal Bernard Hopkins transformed from The Executioner to The Alien…

–        Ruslan Provodnikov is must see T.V. I hope Freddie Roach teaches him how to avoid an uppercut, though.

–        Showtime’s interviewing Jim Gray proposed the interesting question “How do you figure that you’re in better shape and able to out-work someone who’s 30 when you’re 48?” to Bernard Hopkins after his landslide points win over Karo Murat. The artist formerly known as The Executioner responded candidly: “I’m a freaking alien! I’ll be going to a doctor to see about that on Monday.”

–        I haven’t seen a fighter wear such an electric green outfit since Paul Williams’ KO loss to Sergio Martinez.

–        If Miguel Cotto lines up a bout with either Sergio Martinez or Saul Alvarez and actually comes out victorious, I would wager that a rematch with Floyd Mayweather would be a very compelling story line, extremely easy to set up and would be highly lucrative.

Please send all hate mail regarding my stance on Deontay Wilder to CHENZEN99@GMAIL.COM, you are considered on the record. Also, donations will be accepted at the same email address. I hope you’ve had your fill of my randomly configured catch phrases, one-liners and dangling participles. We will most definitely be back next week with another episode of boxing’s favorite Sunday Brunch style column along with a bonus recipe! Don’t forget to brush, floss and take your Flintstone vitamins – ten million strong and growing. Sante.