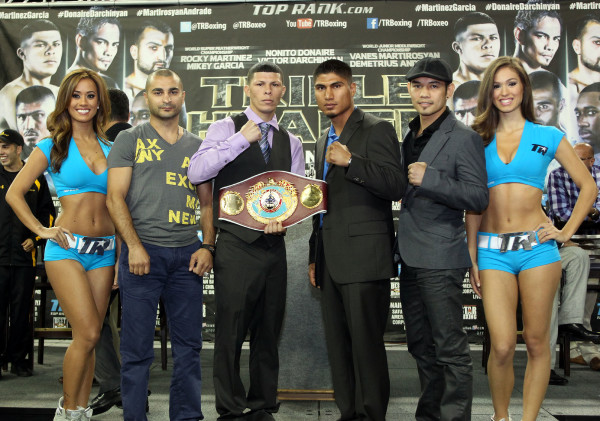 Mikey Garcia comes in making his junior lightweight debut, after his featherweight title reign was abruptly cut short on the scales before his last fight. After failing to make weight, or even attempt to lose the last two pounds, Garcia scored a knockout win over faded former featherweight champion Juan Manuel Lopez. Garcia won the title in January by way of technical decision over Mexican toughman Orlando Salido.

Martinez has fought sparingly since coming back from his first and only career loss two years ago; a hard-fought and close unanimous decision loss to Ricky Burns in Glasgow, Scottland. Martinez came back nearly thirteen months later and logged a confidence-building win over journeyman Daniel Attah. Martinez was immediately back in the title picture after the win over Attah. He was set up to face Miguel Beltran Jr. for his old WBO junior lightweight title, made vacant when Burns left to move up to lightweight. Martinez battled to a split draw with Juan Carlos Burgos in his first defense, and won a split decision over Diego Magdaleno in April.

Garcia will have the edge in youth and punching power on Saturday night. Raised around boxing his entire life, Garcia has developed a sound grasp of the technical aspects of the sport. He sets up his shots behind a solid jab, and he works well to the body. Garcia, to his credit, is more than a come-forward Mexican brawler. He’s a good counter puncher who has shown patience and the ring smarts to know when and where to place his shots. The big question mark surrounding Garcia going into Saturday night’s fight will be whether or not his power stayed behind at featherweight when he moved up to junior lightweight. We can speculate all we want as to whether or not ridding himself of the physical struggle to make weight will help his power, but we won’t know until the bell rings.

Martinez is a whirlwind of activity in the ring. If he had more punching power he would be downright scary, but as he lacks eye-popping punching power, he often relies on a sustained assault over the quick end. Martinez doesn’t do one thing spectacularly well, rather he does many things acceptably. He often comes in standing tall with his hands at his ears. Martinez doesn’t move his head enough, and is more than willing to take a few to land one or two.

Martinez is an ideal opponent to welcome a young, undefeated young fighter like Mikey Garcia to a new division. Stylistically he fits right in with what Garcia does well. Martinez will pressure Garcia and make him work while he looks for his counter shots. But the counter-punching opportunities will be there, and Garcia will capitalize on most of them. Martinez will finish the fight on his feet, but the recent rash of ring tragedies will force an official or corner man to step in and pull the plug in the fight after the tenth round, making Mikey Garcia a two-division world titlist at only 25 years of age.

In the co-feature, Nonito Donaire comes in after a long layoff following a bad loss to Guillermo Rigondeaux back in April. Donaire, who was comfortable to sit back and hunt for the opening for the home run punch, was soundly outclassed by his Cuban vanquisher. Donaire’s style had slowly become more and more one dimensional since a stunning one-punch TKO win over Darchinyan in 2007. And due to his lack of self-awareness or an inability to come to terms with reality in his post-fight interviews, that is unlikely to change.

Darchinyan has slowly fallen off the map since moving up from the flyweight division after he was unable to get Donaire to agree to a rematch. Once feared for his eerily awkward style and concussive punching power, Darchinyan slowly became an awkward one trick pony who forgot how to do his one trick. Darchinyan was able to shock his critics last September, however, when he out-boxed previously undefeated Puerto Rican prospect Luis Orlando Del Valle over twelve solid rounds.

Darchinyan has shown improvements since moving so far up in weight past his most effective weight, but he still remains an aggressive hunter who will be wide open to both straight and short hook counters when he’s attacking. He’s stylistically a very good fit for a Nonito Donaire on the comeback trail, and who may be in need of a confidence boost.

The opening bout will see two undefeated prospects with thin resumes doing battle for a vacant WBO junior middleweight belt. Martirosyan is the more experienced of the two. He won a decision over former champion Kassim Ouma in 2010, and followed that up with a dominant win over fellow heralded prospect Joe Green five months later. Since the win over Greene, Martirosyan has fought in several WBC junior middleweight title eliminators against pedestrian opposition. Last October he finally had a shot against a game challenger, one Erislandy Lara. A nasty cut over Martirosyan’s eye from an accidental head butt resulted in a nine-round technical draw.  He bounced back with a stoppage win over journeyman Ryan Davis in June of this year.

In 19 fights since turning pro after the 2008 Olympic Games, Andrade has logged only two wins over somewhat acceptable opposition for a well-regarded prospect. A 2011 win over Grady Brewer was the first test of Andrade’s career, and Andrade came out unscathed in a dominant performance.  In his last outing, Andrade shut out former welterweight title challenger Freddy Hernandez.

Neither man has exceptional punching power, but Martirosyan lands the harder, more meaningful punches of the two. Andrade is the more athletically gifted of the two, and he has a nice right jab and good hand speed. Martirosyan also possesses good hand speed and a good left jab. He has a good right hand that he shoots straight down the middle, and it could prove to be a very good weapon against his southpaw opponent. Defensively Andrade has the edge, as it appears. Against club-level opponents he’s shown a knack for slipping punches, while Martirosyan has shown some bad habits, such as backing straight up and getting caught, against slightly better opposition.

Martirosyan should come out on top in the opening bout of HBO’s “Boxing After Dark”. It will be a fight with many close rounds, and in the end don’t be surprised to see one judge scoring closely for Martirosyan, another closely for Andrade, and one with a wide margin in favor of Martirosyan, who will take a split decision and his first world title belt.