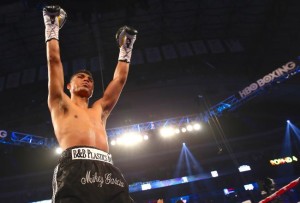 A shocking flash knockdown of Garcia in the second was the only surprise in this bout as the former featherweight champ from Oxnard, California analyzed, probed, broke down, and eventually tore apart Puerto Rico’s Martinez en route to his knockout victory.

Beginning in the sixth round, Garcia, who had spent much of the early rounds boxing and winning close rounds on textbook ring guile, turned up the heat. Long, accurate combinations worked their way through Martinez’s guard and began busting up the defending champ.

In the eighth round, a sharp Garcia combination upstairs brought Martinez’s hands up and left a wide-open body. One brutal left hook to the liver later, Martinez would be on the canvas, crippled in pain and unable to beat the referee’s ten count.

For Garcia, stardom approaches for the now-two-division world champ, although another move up in weight, to 135 lbs. may be necessary for the real money fights in his weight range.

In the co-main event, Nonito Donaire (32-2, 21 KOs) returned to the ring after an embarrassing loss to Guillermo Rigondeaux in April and nearly lost again, this time to hand-picked proposed KO-fodder Vic Darchinyan (39-6-1, 28 KOs) before pulling off the TKO 9 victory.

Looking flat and listless, Donaire fell into a round-losing funk after doing just enough to take much of the first three rounds. Darchinyan, looking to avenge a 2007 TKO 5 loss four divisions smaller, kept coming forward as expected and actually began winning the fight from a curiously lackluster betting favorite.

The 37-year-old Armenian southpaw, as awkward as ever, not only began winning rounds after the third, but began landing some significant shots to a Donaire, who was looking increasingly respectful of the underdog’s power.

Behind on the scorecards and facing the sober reality of two consecutive high-profile losses, Donaire found lightning in a bottle with a devastating left hook that dropped Darchinyan in the ninth round.

Darchinyan would beat the count, but never again regain his legs. Seconds later, a reawakened Donaire would pin his rival in the corner and force a referee stoppage with a barrage of shots from all angles.

Chalk up the split decision to another high profile travesty by a ringside judge. This time, judge Javier Alvarez wears the dunce cap for issuing a putrid 115-112 tally in favor of Martirosyan, a fighter who clearly lost.

As for the fight, itself, Andrade was a solid, decisive winner. Except for a first round knockdown that came at the end of a round he was clearly winning, Andrade controlled the pace and tempo of the bout. Landing the harder punches and connecting more frequently, the 25-year-old southpaw was just a bit sharper than his talented 27-year-old rival.

The Boxing Tribune scored the bout 116-111 for Andrade.