Ciao family! Welcome back to another shish kabob, chest hair and 80s gold chain scented edition of Boxing’s Sunday Brunch – the highest rated, loosely food-themed Sunday boxing column that scores top marks amongst males in the 18-35 demographic, in our time slot. This week we’ll be discussing the great HBO card from Saturday night. Also, we will take a long, 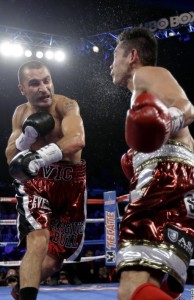 awkward look at what I’ve noticed this week. We are that corner piece that mercilessly jams into your big toe in the middle of the night. With that being said, I gave you your instructions in the dressing room, what I say you must obey – Cuidate, escucha me, toca los manos y buena suerte…Let’s get it on!

Let me begin by saying that I was very much looking forward to this one. Nonito Donaire and Vic Darchinyan hadn’t crossed paths inside of the squared circle since July, 2007. At that time, Darchinyan was a red-hot bolt to the brain for the flyweight division, while Nonito Donaire had fought only mediocre opposition and was moving down in weight for the championship opportunity.

The Filipino Flash fought well, as did Vic Darchinyan and both former champions were looking to expose each other’s flaws. Ultimately, Vic’s aggression turned against him in the fifth, as he came in with an unbelievably wide uppercut – that Donaire saw from General Santos City – and was able to easily counter with his one effective punch – the left hook.  Nonito Donaire connected and the Raging Bull was floored. He attempted to scramble to his wobbly feet, but was intercepted by the referee as he was in no condition to continue.

Fast forward nearly seven years and mix in a painful shut-out defeat and a seemingly one-dimensional, punch weary version of Nonito Donaire is what is left. As was anticipated by many, Darchinyan looked both extremely motivated and calculated, while Donaire fell into his usual routine of hunting for a big go-home-early punch…which he usually finds, as he did on Saturday night.

From the outside it seems as though Nonito still has plenty of excellent physical attributes and some would say that he is squandering his gifts by only really committing to one punch. I say if this is what he feels he can do and still be safe and successful then so be it. Donaire should be free of criticism regarding his tactics and a realistic view should be taken when looking at who he is and what he can bring to the ring. Perhaps Nonito Donaire is just a fighter who is in regression at this stage of his career.

At the time of the stoppage I had Vic Darchinyan ahead on points, as did two of the ringside judges.  The Fil-Am was holding his own against the stalking aggression of Darchinyan, but the Armenian was slowly applying a comprehensive beat down. In the ninth round of a scheduled ten, Nonito Donaire finally found his home run punch and decked Darchinyan, who nearly flew out of the ring face first. Vic beat the count, but it was only a matter of time before a well placed stoppage was administered by referee Laurence Cole.

Miguel Angel “Mikey” Garcia is certainly the truth in the featherweight division. Unfortunately (and at no fault of his own), the division is not as strong as some of the surrounding weight classes. Garcia’s frame will definitely allow for him to rise in weight, possibly as high as welterweight in due time.

Mikey Garcia’s extremely high technical ability paired with his tight fundamentals and powerful, two-fisted wrecking balls make him a nightmare for anyone within 10 to 15 pounds.  After Garcia puts a neat bow on the featherweight division, he will undoubtedly seek his fortune higher up the scales. A fantastic litmus test for the young power boxer would be a fight with the former Cuban sensation, Yuriorkis Gamboa.

Before he become unbelievably inactive, Gamboa was fast becoming one of the most exciting fighters in the world. His explosiveness and unreal athleticism were honestly amazing to witness at times. His talents led him to develop a swagger of invincibility, which was shocked back into reality by a handful of opponents who dropped the former gold medalist. The Cuban has always found a way to win and given a tune up or two, a fight with Mikey Garcia could be a nuclear detonation waiting to happen.

Manny Pacquiao and Brandon Rios’ first episode of HBO’s 24/7 documentary was predictably philosophical, introspective and engaging – here are some of the more interesting quotes from the episode:

On Pacquiao’s shocking knockout loss to Juan Manuel Marquez – “A lot of things happen in boxing, but that was the scariest moment of my life.” – Freddie Roach

“You have to understand that this is sports…sometimes you lose.” – Manny Pacquiao

“There’s no pressure right now…I’m inspired because they think my boxing career is over and I tell them I’m not done yet.” – Manny Pacquiao

“This is what we choose and no one makes us do this – he handles that better than anyone I’ve ever seen.” – Freddie Roach

“If you don’t want to lose then don’t box, don’t fight. This is a game. I lost, it’s ok; I lost. I’m not thinking about that [being scared or getting hurt in his next fight].” – Manny Pacquiao

We return to our culinary roots this week as I’m going to walk you through the process of making legit, restaurant style fried rice. What you will need: 1 batch of white rice (long grain), cooked and left to cool uncovered in the refrigerator overnight. 1tbs vegetable oil, 2 eggs, soy sauce, chicken or vegetable bullion powder, assorted vegetables of your choice (alternately you can use chicken or whatever leftover meat you have on hand…Unless of course you want authentic Chinese char siu roast pork in your fried rice, which is a story for another day…), salt, white pepper and sugar.

Put a wok or large pan on the fire. Crack your two eggs in a bowl and mix until combined. Put your cold rice in a large bowl or container and put two plastic gloves on your hands (you don’t have to, but I speak from experience). Add in your teaspoon of bullion powder along with one half teaspoon of salt and a teaspoon and a half of sugar. Sprinkle in a dash of white pepper and break up all the rice gently between your fingertips until there are no more balls of rice.

Place some of your oil in your pan and let it smoke for a second. Add your eggs (which should puff up immediately) and swirl vigorously to scramble. Add your diced onion and pepper (if using) and sauté until colored by the heat of the pan. Add in whatever protein you are using and let it cook for a moment in the high heat of the wok. Throw your rice down on top of the food and using two implements (preferably a ladle and a scoop) mix well making sure to grab anything under the rice and combine thoroughly.

Fried rice needs to obviously fry in the pan momentarily to achieve the same texture that you’ve come to expect from it; the trick is to not let it sit for too long. Keep things constantly moving is extremely important. Add water a tablespoon at a time to hydrate the dry rice until a perfect moisture is attained. When it begins to smell like the best fried rice you’ve ever had then it’s time to squirt it with a teaspoon of soy sauce. Make sure to let it cook out totally before removing from the heat. This whole processes should take no longer than 3-4 minutes!

Please send all hate mail regarding my stance on Nonito Donaire’s infinite talents to CHENZEN99@GMAIL.COM – Photoshopped holiday greeting cards picturing Bob Arum in a Christmas sweater with a Rudolph nose and red clown cheeks will be accepted at the same address. Thanks so much for joining us again this week. We hope you’ve been entertained by our randomly configured catch phrases, out dated passwords and dangling participles. We will return next week with another intense blast of boxing gossip, news and views to shoot all over your faces. Until then, santé.