On November 16 at Citizens Bank Arena in Ontario, California, Andre “S.O.G” Ward (26-0, 14 KOs) will defend his WBA super middleweight title against Edwin “La Bomba” Rodriguez (24-0, 16 KOs). The fight marks the return of Ward who had surgery to repair a tear in his right 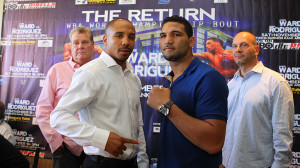 shoulder and hasn’t fought since dismantling Chad Dawson in September of last year. Rather than take on light competition following the longest layoff of his career, Ward has chosen to fight the undefeated 28-year-old Rodriguez.

This bout is a big step up for the Dominican fighter who hasn’t fought anyone close to the universally recognized second best boxer in the world. Instead, he’s beaten the likes of Don George, Will Rosinsky and Aaron Pryor Jr. But momentum could be on Rodriguez’s side after winning the Monaco Super Four Million Dollar Tournament in July.

There is no blueprint on how to beat Ward and boxing with the 2004 Olympic Gold medalist would not end well for “La Bomba”. So look for Rodriguez to try and apply pressure and make the fight a brawl. The problem with that is, as we saw in his bout against Sakio Bika, Ward can box on the inside.

Both Rodriguez and Ward work well in the clinch, using their free hand to score points.
Rodriguez appears to have a slight edge in power but Ward is difficult to hit cleanly because he keeps his chin tucked and uses his jab to keep you off balance. The difference in this fight may be Ward’s straight short shots hitting their target before Rodriguez’s long looping ones. Look for HBO’s lead in to the fight, “Mike Tyson: Undisputed Truth” to pack more of a punch than this one.