Nigger, spic, cracker, gook, dago, dink, wetback, zipperhead, dothead, kike, jerry, honky, and spade. All of the aforementioned are just words, assigned a derogatory meaning and assigned to ethnic groups with intent to insult those groups of people. We’re all adults and most of us have heard these words at some point in our lives, be it in a movie, from a standup comic, yelled from a car window in traffic, or if you have a friend quoting the infamous Mel Gibson voicemails. Mexican, Jew, German, African-American, Indian, Chinese, and Italian. These are also merely words, assigned to groups of people born within the borders of the countries to which these words have been assigned. I’m sure we’ve all heard a joke that starts off with “a White guy, a Mexican, and a Black Guy walk into a bar”, and depending on when and where our grandparents were born it may have been told as “a White guy, a beaner, and a nigger walk into a bar”. Some reading this may use these words, possibly regularly. We all know they’re there, yet we pretend we don’t use them. They left that huge pile of elephant turds in the corner of the room. 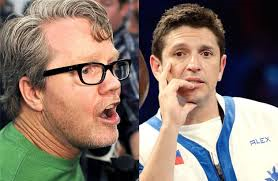 Words, in and of themselves, are harmless. Intent is the real weapon. Intent takes a harmless word from the second category above and moves it up into the first category of words. As comedian George Carlin once so eloquently said:

“It’s the intention behind the words that makes them good or bad. The words are completely neutral. The words are innocent. I get tired of people talking about bad words and bad language. For instance, you take the word ‘Nigger.’ There is absolutely nothing wrong with the word ‘Nigger’ in and of itself. It’s the racist asshole who’s using it that you ought to be concerned about.”

I won’t pretend I and many others don’t use words like this. Whether it’s in jokes, or in discussion, we use these words. Earlier this year as I watched Delvin Rodriguez beat up on George Tahdooahnnippah on Friday Night Fights, I tweeted a joke about George T. and fire water. Intended entirely as a joke (most of my tweets are), one small-time boxing/MMA promoter who only promotes Native Americans, didn’t get the obvious humorous tone (but he didn’t get the inherent racism in his business’ mission to only promote Native Americans, so he might not be the most perceptive).

Freddie Roach’s racially charged outburst on Tuesday morning is the perfect example of harmless words, fired with the intent to insult. For those who have not been privy to the news, Roach was involved in a verbal and physical altercation with Brandon Rios’ team on Tuesday (Wednesday in Macau) after interrupting an interview taking place at the tail end of Rios’ media workout. Pacquiao’s workout was to take place from 11 am to 2 pm, while Rios’ workout was scheduled from 9 to 11 am. Rios’ workout ran long, due to an obligation to appear on ESPN earlier in the day, and when Roach arrived he allegedly ordered everyone out of the gym. When met with resistance, words were exchanged, Roach was kicked in the chest by Alex Ariza, and in the ensuing scuffle Roach referred to one of Team Rios as a “fucking Mexican”. Roach also called Team-Rios-friendly video correspondent Elie Seckbach a “fucking Jew”. All the while Alex Ariza mocked Roach’s speech, which is affected by Parkinson’s disease.

In the minutes following the kerfuffle, Roach gave his account of the events to Max Boxing’s “Radio Raheem”. Just after Roach’s interview, Raheem obtained accounts from Robert Garcia and Alex Ariza, completely contradicting Roach’s account. We only know that at least one person is lying, but it is likely that everyone is lying, given the lack of footage from the very beginning of the exchange of words.

Predictably so, the boxing world is split down the middle on this issue. One side is on Team Rios, vehemently ripping Roach for his racist tirade, while the other side is defending Roach. Social media has been alive with arguments dismissing the racist element of Roach’s remarks, claiming “fucking Mexican” and “fucking Jew” aren’t racial slurs because one guy IS Mexican (he may only be part Mexican, according to reports) and the other IS a Jew.

Without going into some lengthy diatribe on the nature of race in boxing as a defense of Roach’s attack on the race/ethnicity of a couple members of Team Rios, Roach should absolutely be labeled a racist. He clearly is one. As humans, we aren’t very far removed from the jungle. Had it not been for the invent of clothing we’d still be slinging our feces at each other. By nature, our animalistic side takes over when confronted with violence. Feelings boil over, oftentimes forcing us to say things out of anger. Sometimes we say what we really feel. Anger has a way of revealing the truth. Insults may be aimed at one’s looks, weight, race, religion, and even clothing.

Roach’s insults weren’t intended to simply identify each guy in his line of fire so they’d know he was talking to them. They were intended to insult and harm. He was angry and aimed low, and he hit his target. The fact that he didn’t yell “fucking wetback” or “fucking kike” doesn’t change the fact that his words were aimed with malicious intent. In this instance, “Mexican” and “Jew” are racist slurs directed at those in opposition of Freddie Roach.

Roach may very well have been pushed past his limit by Ariza’s mocking of a disease he didn’t choose to contract. But he stooped to Ariza’s level, and maybe even below it by attacking two people who didn’t get an opportunity to choose where their parents conceived them (despite the fact that the “fucking Mexican” in this equation might not really be Mexican).

In boxing, where race and/or ethnicity play a large part in the matchmaking and promoting of fights, it’s easy to see how race is the first insult card pulled, with the homophobic card being probably the second most pulled card(but that’s a topic for another day altogether).

Walk into the Robert Garcia Boxing Academy in Oxnard, California and you’ll likely hear someone exclaiming proudly yet playfully, “Motherfucker, I’m a fuckin’ Mexican!” Walk into the Mayweather Boxing Club, and it’s a good bet you’ll hear Black fighters calling each other “Nigga!” In gyms all over the world you’ll hear racist and homophobic slurs between friends. This is a display of words in their harmless state.

Freddie Roach let his emotions get the best of him, and he let his feelings boil out over the edge of the pot. He inadvertently revealed his feelings towards Mexicans and Jews, whether you care to admit it or not. The mask has slipped. Freddie Roach makes his living training many minorities, including Mexican fighters. Most of his clients – and certainly his most prominent, Manny Pacquiao – are promoted and paid by a Jewish promoter. Roach knew he was wrong; it is why he conveniently forgot to mention his culpability in the fight in his interview with “Radio Raheem” (and kudos to Raheem for not editing any of his earlier footage showing Roach clearly ordering Team Rios out of the gym).

Racism is a topic that should be talked about openly, and the idea that racism doesn’t exist needs to go away. Racists should be classified as such. Apologists, eager to make excuses for guys like Freddie Roach, should ask themselves what stance they would have taken, had it been the less amicable Alex Ariza, and not the lovable Freddie Roach calling people “fucking Mexicans and Jews”.

I’ve decided to do away with the third person narrative to let you all know that I don’t censor myself when speaking on touchy subjects. I used slurs where most would say things like “n-word”, because I take responsibility for using words that inspire negative thoughts to pop into your head. Saying “n-word” is a cop-out, and not really my style. You can email me at timharrison65@gmail.com, or follow me on Twitter at www.twitter.com/TheTimHarrison.