On Saturday, December 7, former Olympian “Sir” Marcus Browne (7-0, 6 KOs) takes on Kevin Engel (20-8, 16 KOs) in a Light Heavyweight showdown at the Barclays Center in Brooklyn, New York. The fight is on the undercard of what’s being dubbed as the “Battle for Brooklyn” which pits Paulie Malignaggi (32-5, 7 KOs) against Zab Judah (42-8, 29 KOs) in the main event. 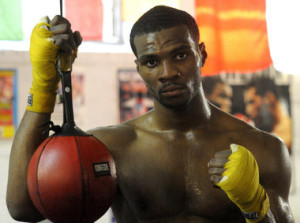 Browne’s last fight, against Lamont Williams in September was a clinch-fest and although he won a unanimous decision he aims to look more impressive this time around.

“I haven’t really been away from the gym,” said Browne. “I took a week and a half off after my last fight and have been in the gym ever since, now it’s time to put on a show.”

His opponent Kevin Engel is considered to be a step up in competition for Browne. But to the 2012 Olympian it’ll be business as usual when he enters an arena that has become an office of sorts for him in Brooklyn.

This will be the sixth time that “Sir Marcus” competes in 2013 and in today’s era that’s an active schedule for even the youngest of fighters. He believes that a quick turn around is the only way he’s going to learn and having the most notorious manager in the game in his corner should help to keep the fights coming.

“This is my first year on the job and I’ve been learning at a good pace,” Browne said. I’ve been fighting every two months, so I won’t forget the negative things that I did in my last fight and I can grow from them. You know that Al Haymon’s going to keep me busy.”

It’s been an explosive year for 175-pound pugilists like Adonis Stevenson and Sergey Kovalev in what has become one of the sports most exciting divisions. But don’t expect Browne to look ahead at possible future opponents just yet.

“I’m not looking ahead or being a Prima donna,” said Browne. “I know it takes a lot to get to that level in boxing. I have to get there first and right now these building blocks are going to get me there.”

Like Stevenson and Kovalev, Browne is establishing himself as a knockout artist. He’s stopped six out of his seven opponents and has endeared himself to what can be a tough to please crowd at the Barclays. But when it comes to his favorite boxers he enjoys the tacticians of the sweet science more than the brawlers.

“I love Guillermo Rigondeaux, I think he’s one of the best boxers out,” Browne said. “Him, Floyd Mayweather and Andre Ward are my three favorite boxers right now.”

Not too many fighters in the game can claim to be an Olympian and even fewer can say that they’ve medaled at the games. After being shut out of the medal count in 2012 Browne believes that the Men’s Olympic boxing team is making strides towards reclaiming its past glory.

“I feel like they should’ve given us more international fights leading up to the Olympics, which they’re doing now,” said Browne. “A lot more guys are going to the world championships and a lot of guys are bringing home medals so that’s a good sign.”