Boardwalk Hall, Atlantic City, New Jersey – Guillermo “El Chacal” Rigondeaux turned in another sublime performance in defense of his WBA and WBO super bantamweight titles, turning away the challenge of Joseph “King Kong” Agbeko (29-5, 22 KOs) over twelve masterful rounds. Unfortunately, Rigondeaux’s performance played out in front of a sparse crowd, as many ringside seats emptied after the destructive firefight between James “Mandingo Warrior” Kirkland and Glen “Jersey Boy” Tapia in the co-main event. The fight was short and brutal, with Kirkland winning by way of TKO in the sixth round. And in the opening bout of HBO’s telecast, Matthew “Mack The Knife” Macklin scored a decision win over young and untested Lamar Russ. 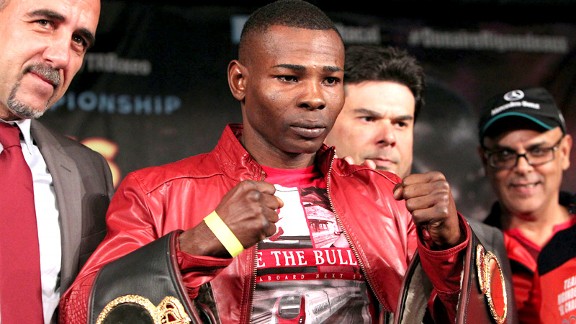 Rigondeaux (13-0, 8 KOs) controlled the pace of the fight from the first round on. Agbeko fought cautiously and at the end of Rigondeaux’s stiff right jab. Rigondeaux worked in a short right hook and a sweeping left uppercut counter when Agbeko threw his straight right hand. In the second round, Agbeko’s offense stalled, as Rigondeaux worked in straight lefts to the body before sliding out to his left, while Agbeko offered nothing in return.

In rounds three and four Agbeko bobbed and weaved and was able to make Rigondeaux, usually an extremely accurate puncher, miss often. Agbeko was still unable to land anything of consequence. Each time he threw his right hand, Rigondeaux slipped under and returned with a blinding left hand thrown as an uppercut or straight down the middle.

Rigondeaux turned up the pressure ever so slightly in the sixth round, opening up with two and three-punch combinations. He stalked Agbeko, who resorted to fighting off his back foot. Agbeko tried jabbing at Rigondeaux’s body to no avail. Occasionally he was able to touch Rigondeaux with a straight right hand downstairs, but those punches were few and far between.

Agbeko landed his first meaningful and clean punch of the fight in the ninth round, when he caught Rigondeaux flush with a counter right hand during a short exchange. Rigondeaux calmly slipped away and reset after the punch, but was hit with a jab, providing a short moment of drama. To his credit, Agbeko adjusted and was able to take away the left uppercut of Rigondeaux over the late rounds.

In the tenth round, Agbeko again tried to push the tempo of the fight. Rigondeaux worked his jab, and countered with another jab or right hook when Agbeko countered his first jab. And when Agbeko pushed forward further, Rigondeaux danced around him, bringing on a chorus of “boos” from the crowd.

Over the last two rounds Agbeko leaned more on his left hook, only to constantly miss as Rigondeaux ducked under and pivoted away. Occasionally Rigondeaux countered with a right hook to the body or a jab upstairs.

In the co-main event, the James Kirkland-Anne Wolfe Reunion proved to be just what the doctor ordered, as James Kirkland was victorious in his return to the ring after nearly two years out of action. Kirkland (32-1,28 KOs) came out aggressive early on and swarmed Glen Tapia (20-1, 12 KOs) with vicious sweeping left hands and chopping right hooks. Tapia gave as good as he got in the early going, unloading everything on Kirkland and made a mess of his left eye by the end of the first round. Kirkland showed tremendous conditioning in waking through everything Tapia threw at him.

But that proved to be all Tapia had, as he spent the next five rounds moving backwards, often finding himself trapped along the ropes and absorbing heavy blows from a relentless James Kirkland. The ringside physician took a close look at Tapia after the fourth and fifth rounds, and allowed him to come out each time. But in the sixth frame, Kirkland barreled through Tapia, bulling him into the ropes and unloaded on him. Referee Steve Smoger watched closely as Kirkland unloaded on him, and as he stepped in to end the fight, Kirkland landed on last sweeping left hook, putting Tapia out on his feet as Smoger held him up in the corner. The time of the stoppage was :38 of the sixth round.

In the opening bout of the HBO telecast, Matthew “Mack The Knife” Macklin (30-5, 20 KOs)scored a unanimous decision victory over late replacement Lamar Russ (11-1, 5 KOs). Macklin started out a ball of nervous energy, working frantically to get inside Russ’ long reach and control the pace of the fight. He employed solid head and lateral movement and a sneaky up-jab to push the rangy Lamar Russ back. When Russ was able to get on the front foot and control the fight by doubling and tripling his jab, Macklin looked out of sorts.

Macklin made some slight adjustments in the middle rounds when he started to double his jab after working his way inside and ripping Russ to the body and head. The double jab helped to keep Russ on the defensive while Macklin got out of range.