12/13 – Lucas Browne (19-0, 17 KO’s) vs. Clarence Tillman (11-15-2, 6 KO’s) II – Victoria, Australia
Aussie heavyweight Browne has gained quite a following recently. After a one sided decision over James Toney in April, he stopped Travis Walker and Richard Towers in just over a three month period. He’s been lobbying for a bout with U.K. fighter David Price, who’s coming off two knockout losses to Tony Thompson. For Tillman, this is a chance to get revenge on Browne, who won a shut out decision in their first bout in 2011 if he can swing his momentum around; he’s lost his last six.
*Browne won via first round TKO 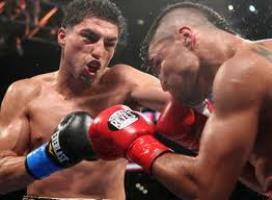 Josesito Lopez (30-6, 18 KO’s) vs. Mike Arnaoutis (24-9-2, 11 KO’s)
You’ll remember Lopez as the guy who scored a huge upset last year when he stopped Victor Ortiz in the ninth round after breaking Ortiz’s jaw. The win earned him a shot at Canelo Alvarez later that year, but he was stopped in five rounds. He came back this past June and fought Saturday night’s main eventer, Marcos Maidana, and was stopped in six. Arnaoutis had success in the mid to late 2000’s, winning both the WBO and USBA light welterweight titles. After suffering a second round knockout to Victor Ortiz in 2009, he was never able to get his career back on track, losing six of his next nine outings, which included three regional title bouts.

Francisco Vargas (17-0-1, 13 KO’s) vs. Jerry Belmontes (18-2, 5 KO’s)
Vargas won the vacant NABF super featherweight and vacant WBO Inter-Continental super featherweight titles in his last outing, beating then undefeated Brandon Bennett in August. Belmontes was undefeated until last year, when lost a 10 round decision to Eric Hunter. He won an eight rounder early in 2013, but lost another decision in his last bout to Andrew Cancio.

Errol Spence (9-0, 7 KO’s) vs. Pipino Cuevas Jr. (17-10, 15 KO’s)
The undefeated U.S. Olympian puts his undefeated record up against his most experienced opponent to date, Cuevas Jr., who turned to boxing after a short stint in MMA. Cuevas went 11-0 before hitting the skids, and is 6-10 since.

Joseph Diaz (7-0, 5 KO’s) vs. Carlos Rodriguez (18-12-4, 10 KO’s)
Another undefeated Olympian on the card, Diaz has won his last four by stoppage. Rodriguez has fought some quality opponents, but doesn’t do well in those cases. He’s won his last two by knockout against opponents with a combined 33 losses.

Jermall Charlo (16-0, 12 KO’s) vs. Joseph De los Santos (17-11-3, 9 KO’s)
Charlo fights for the seventh time this year, his last 10 bouts have ended inside the distance. After losing to Glen Tapia in April, De los Santos comes in on a three fight KO winning streak against no one special.

12/14 – Juergen Braehmer (41-2, 31 KO’s) vs. Marcus Oliveira (25-0-1, 20 KO’s) – Neubrandenburg, Germany
Braehmer hasn’t lost since 2008. Since then the EBU and WBO International light heavyweight champ has stopped six of his last 10 opponents, and had a short reign as the WBO light heavyweight world champion. Oliveira holds the WBA Fedebol light heavyweight title, and is coming in having his last four bouts end in knockouts. He last stopped undefeated Ryan Coyne in 11 rounds in April.

12/14 – Kubrat Pulev (18-0, 9 KO’s) vs. Joey Abell (29-6, 28 KO’s) – Neubrandenburg, Germany
Pulev has made his way through the ranks of American heavyweight journeymen; Travis Walker, Derric Rossy, and Dominic Guinn among the names on his ledger with the Walker bout earning him the IBF International heavyweight crown. He’s stepped up in his last three bouts, stopping the once beaten Alexander Dimitrenko to win the EBU heavyweight title, then stopping undefeated Alexander Ustinov and a year later taking a 12 round decision over Tony Thompson. Abell’s a guy with a punchers chance, but is 2-2 in his last four, being stopped by Chris Arreola and Fres Oquendo.

12/14 – Salvador Sanchez II (30-6-3, 18 KO’s) vs. Carlos Soto (11-0-2, 6 KO’s) – Distrito Federal, Mexico
Nephew of the great featherweight legend, Sanchez was stopped in his last two outings both against undefeated opponents. The former WBC Caribbean Boxing Federation featherweight champ looks to get back on the winning track and win the interim WBC Youth World lightweight title when he faces the undefeated vacant WBC Youth Silver lightweight title holder. Soto’s made a record on inexperienced opposition, his last opponent having a 3-10 record.

12/14 – Hassan N’Dam N’Jikam (27-1, 17 KO’s) vs. Anthony Fitzgerald (14-5, 4 KO’s) – Barcelona, Spain
The former WBA and WBO middleweight title holder makes his first ring appearance since losing to Peter Quillin last year in a bout that saw N’Jikam down a total of six times. Fitzgerald makes for a good come back opponent; he’s lost three of his last four, one being a quarter final bout in the Prizefighter series.

12/18 – Bobby Gunn (21-5-1, 18 KO’s) vs. Glen Johnson (52-18-2, 36 KO’s) – Bethlehem, Pennsylvania
When the fight with Roy Jones fell through, Gunn opted to fight the “Road Warrior” instead. Gunn’s fought once since 2009: a stoppage loss to James Toney last year. There’s not much you can say about Johnson that fans don’t already know. The former light heavyweight world champion fought anyone and everyone who would face him in a career that now spans 20 years. Unfortunately, the 44 year old just doesn’t have what it takes these days to keep up with the young contenders, and was comfortably outpointed in his last three losses. Earlier this year he stopped Junior Ramos in two rounds.