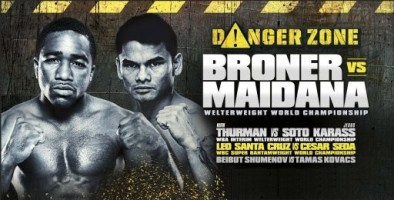 Adrien Broner was visibly uncomfortable in the opening round. Maidana was wild and sloppy, but Broner was unable to do more than hold on. Maidana landed a clipping right hand to Broner’s temple that looked to stiffen his legs a bit, but Broner was quickly back on steady legs. Broner went down in the second round, the result of two big left hooks. He popped up but was on wobbly legs. After holding on for dear life, Broner righted his ship and did some solid work, but was behind by 3 points at the time. In his corner after the second round, Broner demanded he was fine, but he took a few extra seconds getting up for the third.

Broner was able to mount some offense in the third, when he settled in and began countering Maidana with sharp hooks on the way in. Despite his wild flurries, Maidana was much improved technically. He moved his head on the outside and worked from behind his jab, mixing it to the head and body and preventing Broner from getting off first.

Rounds four and five were better rounds for Broner, who started to punch first and catch Maidana’s returns. Maidana was still able to find a home for his right hand, but he was taking two punches to land his one. Maidana began to abandon his jab the more Broner countered him when he threw it. Broner continued to turn the tide until the 8th round, when another big Maidana left hook floored him again. A potential two-point advantage was lessened by some superb acting on the part of Adrien Broner after a deliberate Maidana headbutt, promoting Laurence Cole to take a point.

Broner was hurt again by a left hook in the ninth. As he held on he was hit with another left hook and right hand, furthering his troubles. Broner was in trouble for the remainder if the round, as he moved uncomfortably around the ring in search if breathing room. Broner was unable to discourage Maidana, and he was hit more than he’s been hit in any previous fights. Broner resorted to hitting Maidana when his head went through the ropes, and after the bell to end the eleventh round.

Maidana was hurt by a right hand to start the twelfth, as Broner came out with vicious intent to start the round. Maidana, visibly exhausted, was able to land in spots and back Broner off. As Broner pressed the action he was stunned by a Maidana left hook, but he was quickly back in the attack. Broner was warned for pushing several times and once again in the twelfth, but was never docked a point.

With the win, Maidana becomes the WBA welterweight champion.

Keith Thurman and Jesus Soto Karass did their best to steal the show. A resurgent Soto Karass gave a good accounting of himself in a losing effort to 25-year old Keith “One Time” Thurman. There was some heavy leather landed early on between Thurman and Soto Karass. Both men were rocked by right hands – Thurman with an overhand counter and Soto Karass with a straight. Thurman was open for the overhand right early, particularly while throwing his right to the body.

Thurman was forced to move early and often, and found himself along the ropes more than one would like to against a brawler like Soto Karass. Thurman fought in search of the uppercut at the behest of cornerman Dan Birmingham, but too often he threw it from too far out.

While Thurman went to work on a forward-moving Soto Karass, he was bludgeoned to the body. Despite being visibly troubled by the body work of Soto Karass, Thurman was able to continually pivot away from danger and mark up Soto Karass’ face.

A beautiful rising left uppercut after a jab-right hand combo floored Soto Karass and had him in trouble for the last 37 seconds of the fifth round. Soto Karass made it out of the round, and came out aggressive to start the sixth. Thurman used the ring and Soto Karass’ inability to properly cut him off to move and get set before letting his hands go.

Thurman began to pull away and dominate in the seventh round. With the exception of some solid body shots, round seven was all Keith Thurman using Soto Karass’ head for target practice. As the bell sounded to end the round, Thurman hit Soto Karass with a beautifully-timed sweeping right uppercut. A big left hook and right hand nearly put Soto Karass out on his feet in the ninth round. Thurman followed with a jab, another right hand, and a left hook sent Soto Karass down into the arms of the referee, who caught him to prevent him from possibly hitting his head on the canvas.

Leo Santa Cruz and Cesar Seda put in a great show in the second bout of the night. The mobile and crafty Seda’s offensive trickery helped limit the notorious offensive output of Santa Cruz.

Santa Cruz controlled the first two rounds, whereas Seda was content to move in and out of distance and get a feel for Santa Cruz. Seda hit the deck in the fifth round, the result of a slip erroneously called a knockdown, in a very even round.

Santa Cruz, known for breaking his opponents’ will with his high work rate, was unable to discourage Seda until midway through the ninth round, when a right hand at the end of a combination pushed Seda to the ropes on stuff legs. He was not in serious trouble, however, and made it to the end if the round.

Santa Cruz continued to dominate the 10th and 11th rounds, before each man came out like two bats out of hell in the twelfth. They would settle into a more moderate pace after the first half minute, but they closed the show in emphatic fashion.

WBA light heavyweight titlist Beibut Shumenov needed only three rounds to put Kovacs away. Shumenov was on the attack from the opening bell, and dropped Kovacs in each of the three rounds; once with a left uppercut, a left hook, and an overhand right. That was all the referee needed to see to call a halt to the action to save Kovacs further punishment.