Marcos Maidana’s inspired upset victory over anointed superstar Adrien Broner on Saturday night brought to a screeching halt, the hype machine that made Adrien Broner the heir to the mythical pound-for-pound throne. Broner never had an answer for what Maidana offered. He stood in front of the Argentinean banger when he should have used the huge ring to his advantage. He was baffled by Maidana’s left hook, which he threw as if he was targeting Broner’s body, only to throw it to his head. Broner was also consistently hit by Maidana’s wide right hand; something he should have been able to avoid. 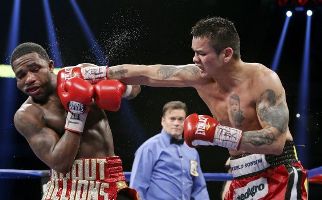 Maidana’s victory also opened the floodgates of humorous Broner-themed internet memes in such quantities not seen since Manny Pacquiao’s knockout loss to Marcos Maidana. Broner, as the once-heir-apparent to Floyd Mayweather Jr., has been the target of much discussion. The common theme late Saturday night and on into Sunday was “Maidana exposed Broner”, and in so many ways it is right on the money. Yes, Adrien Broner was exposed on Saturday night. He was exposed as a fighter with more severe defensive liabilities than originally thought. He was exposed as a fighter lacking the ability to use subtle feints and lateral movement (as I alluded to in my preview) in an effort to stifle a swarming offensive onslaught. But Adrien Broner is young, and the carrot is still there in front of him should he choose to cut the shit and reach out and grab it.

Broner has been involved in the sport since early in his childhood. His natural gifts and abilities alone make him more than most can handle. But if he really wants anyone to believe he can take the mantle when Mayweather eventually steps away from the ring, Broner needs to pair his gifts with a full-time dedication to the sport. Gone should be the days of going down on strippers in crowded strip clubs, leaking sex tapes, subpar rap videos, and showing up to press tours looking overweight and bloated

Broner has the tools, and now is the time to sharpen his tools and take himself to the next level. He’s already proved he’s light years ahead of the C-and-B-level fighters, going forward he needs to prove he can beat the elite. He needs to rebuild his confidence, take stock of what he has left and how much of that he’s willing to give to rebuild his shattered kingdom.

I’d be remiss if I didn’t address the newest controversy surrounding strength and conditioning coach Alex Ariza, who was in Maidana’s corner as cut man on Saturday night. This was just days after learning Brandon Rios (Ariza’s client) tested positive for a banned stimulant after his November 23 fight with Manny Pacquiao, which was only a few days after Ariza was involved in a physical altercation with Team Pacquiao. It’s been an eventful month for the outspoken and controversial Ariza, to say the least.

Saturday night’s controversy came about after video of Ariza wiping the nose or mouth of Maidana with a napkin between rounds 11 and 12. The speculation was that Ariza gave Maidana some kind of performance enhancer through his nose or mouth, or possibly administered smelling salts after Maidana was rocked with two late punches after the bell. Some have speculated Maidana was slipped some kind of pill with the napkin intended to hide it. The video in question (https://www.youtube.com/watch?v=kWixWahOhpw) appears to have been filmed with a cell phone pointed at a television screen, so the footage isn’t completely clear.

Michael Woods spoke with Ariza to get his explanation on Sunday, (http://www.thesweetscience.com/news/articles/17751-alex-ariza-responds-to-allegation-that-he-slipped-energizer-into-mouth-of-maidana) and Ariza assured him he was merely wiping Maidana’s nose.

Ariza right off the bat chuckled. The “napkins,” he explained, were pieces of gauze. “Maidana wanted to blow his nose,” Ariza explained. So, that’s what he did, he stated. And did he put anything in Maidanas’ mouth? “No, of course not,” he said. “People like to make drama. It was nothing. We shouldn’t take away from the fighters’ performance. He did all the work. We didn’t do anything illegal.”

Ariza also gave his assurances he didn’t administer smelling salts to Maidana, and that the USADA post fight blood and urine tests will show Maidana is clean.

The video does come across as suspicious, and we can only hope the Texas Commission will fully investigate the matter to find the facts. Short of any official findings from the commission we’re left to take Ariza at his word. We can only remain suspicious; that is the world in which we live. And if we are to take a felon and the chief architect of baseball’s steroid era’s claims to be clean and “on the side of angels”, shouldn’t we be equally inclined to accept the word of someone with a far less dubious rap sheet?